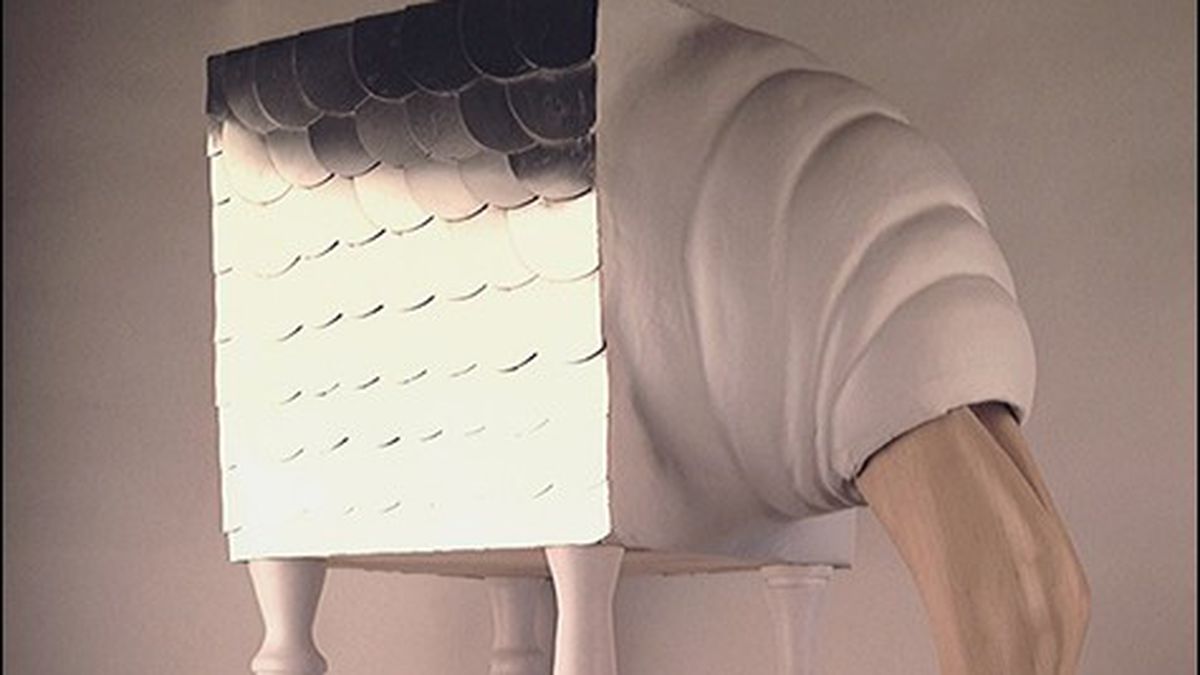 The Animals in Us

Artists Iris Polos and Gordon Glasgow dissect the distinction between human and animal through sculpture and painting in Us at Vessel Gallery.

“Us” can be a word that unites individuals, but it can also differentiate between groups, as the opposite of “them.” The two uses are inevitably intertwined, as any community is necessarily an exemption of others outside of it. The show Us at Vessel Gallery (471 25th St., Oakland) explores this tension between inclusion and exclusion in regards to the relationships between humans and animals through the art of Gordon Glasgow and Iris Polos. Both Bay Area artists draw attention to the underappreciation of animal life, and the contrasting privilege of humans.

Polos is a well-practiced painter, but has recently pushed her work into the medium of sculpture. She builds up each of her pieces by intricately cutting paper into small organic shapes resembling feathers and ferns, and laboriously layering them until a figure takes shape. In this manner, she creates magnificently lively animal busts that, upon deeper inspection, reveal hard-hitting social critique.

Polos’ “La Pieta” features a curved giraffe’s bust, gracefully drooping as if in mourning. From the bottom of the severed neck dangles a multi-colored chain of twisting genetic code. The piece refers to Copenhagen Zoo’s controversial decision in February to euthanize a two-year-old giraffe and publicly feed it to their lions, under the reasoning that the animal’s DNA was too similar to others’ in their breeding program.

Although Polos is inspired by conceptual critique, she said that the form of her anatomically convincing sculptures comes to her intuitively, so she is never the master of the animals she evokes. “I don’t like control very much … I want to be surprised and I want to give the animal a will, I want to let it speak, tell its story, move and come to life and that seems to happen when … I am not there,” she wrote in an email.

Glasgow’s works are more meditative, manifesting in elegantly designed and executed pieces that are often clever twists on commonplace objects. The artist, who has a background in design, creates primarily sleek wooden objects that show their original grain with accents of white paint or metal. “Organic 3D Printer” is a box standing on four fancy stool legs with two dangling calf legs emerging from a bulging orifice, as if they’re part of something being born. This piece, and many others in Us, work to undo the cultural segregation between animal and human life, urging us to incorporate a deeper consideration of creatures into our cultural psyche. “Animals are a way we see ourselves,” wrote Glasgow in an email. “They are our mirrors, the canary in the mine. They can represent our own decline, environmentally and physically.”

Like an animal in a zoo, Polos’ and Glasgow’s work initially stokes the childlike curiosity of the viewer, but ultimately provoke healthy ethical contemplation — and with the full show filling Vessel’s large space, there is a lot to think about.