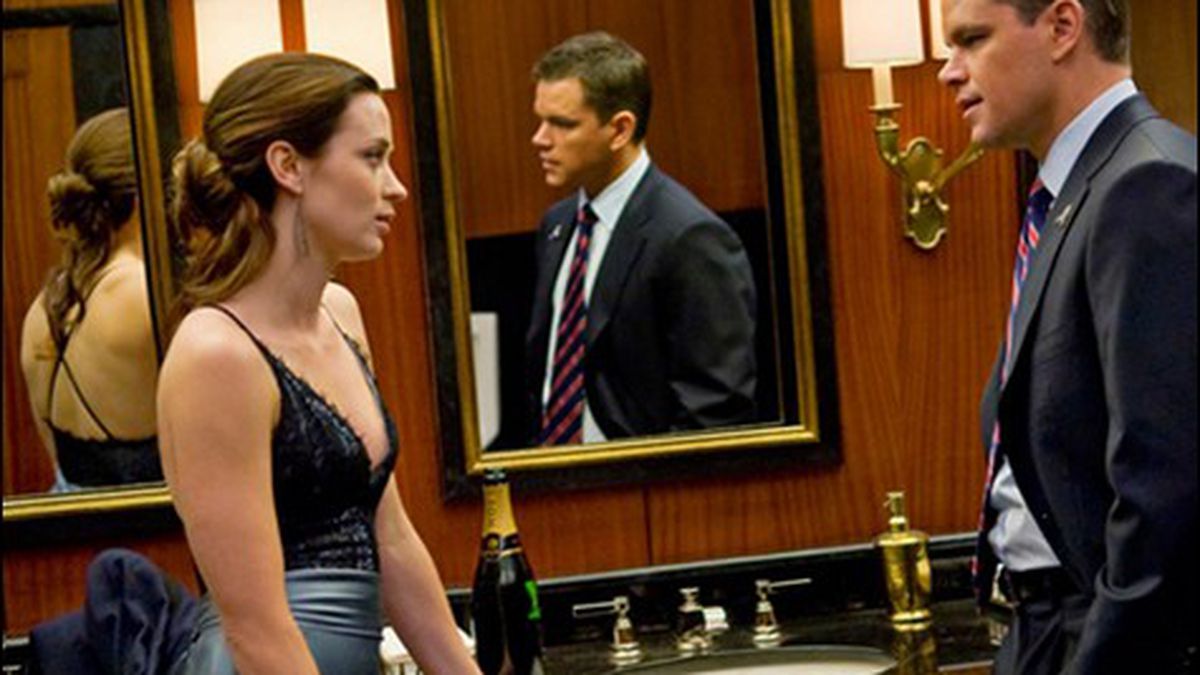 Even Philip K. Dick's name is no guarantee.

Not every Philip K. Dick adaptation is golden. Consider The Adjustment Bureau, adapted from a short story by the famed sci-fi author, which opens this week as a movie directed by George Nolfi and starring Matt Damon and Emily Blunt.

The setting is contemporary Manhattan. Attorney David Norris (Damon) is the front runner in the upcoming US Senate race, but strange things are happening to him. As if by some invisible hand, his campaign is sabotaged and certain victory is snatched away at the last minute. The leading cause of David’s perplexity could very well be his chance meeting, in a men’s restroom just before his capitulation speech, with captivating modern dance performer Elise Sella (Blunt). Suddenly David glimpses what he believes to be his destiny. He will pursue the elusive Elise as if nothing else matters.

But there’s another party involved. Mysterious men in suits and Fifties-style snap-brim hats have been shadowing David all along. They appear to operate out of the office of a venture capital firm, but unlike ordinary businessman they carry unusual, glowing map-like charts and have the ability to instantly pop up all over New York City through strategically placed doorways. Are they CIA? FBI? Private security ops? Nope, they’re agents of the Adjustment Bureau, true super-terrestrials who can pass through time and space with the speed of fleeting thoughts — and who evidently have a special plan for David.

Years pass. David temporarily loses touch with Elise, but then randomly reunites with her. And they’re still very interested in each other. He’s back in politics, running for the Senate again. Of course, the men from the Adjustment Bureau are still tracking his every move on their curious charts, and Elise’s presence seems to upset them. So we have to ask ourselves: Is this a sci-fi adventure or a romantic drama?

Neither. Screenwriter-director Nolfi, who worked on Ocean’s Twelve as well as The Bourne Ultimatum, got stuck with one of Dick’s lesser properties. The late author (1928-1982), who lived for years in Berkeley, wrote the short story “The Adjustment Team” in 1954. In its narrative screenplay adaptation, it comes off a bit skimpy. The one-joke premise is that however much the Adjustment agents try to order David Norris’ life, he outwits/out-runs/out-charms them and successfully wrests control from these ur-corporate suits and their flow charts. As a straight sci-fi thriller, it couldn’t occupy a fraction of the running time of, say, Inception. As an urban romance, it’s chillier than last night’s espresso. And as a 1950s-style, metaphor-laden, non-conformist allegorical warning against the evils of too much planning, it’s about sixty years late.

Damon, of course, could convincingly portray any contemporary American chased by the faceless forces of control — just give him something to jump off of and he’s right at home. For her part, Ms. Blunt is also apt for the role of the irresistible fulcrum of the story. Damon and Blunt are actually quite appealing by themselves — who needs all the secret-door stuff?

The Adjustment Bureau is never going to make anyone forget about Blade Runner, Total Recall, Minority Report, or even A Scanner Darkly. It fits neatly into the P.K. Dick also-ran file alongside Paycheck and Screamers. The Adjustment guys — can we call them guardian angels? — are just too benign to be very interesting and too sinister to belong in anything other than a routine sci-fi flick. To make the necessary adjustments to fix this broken project, we’d have to tear it down and start all over again in another dimension, and who’s got time for that?