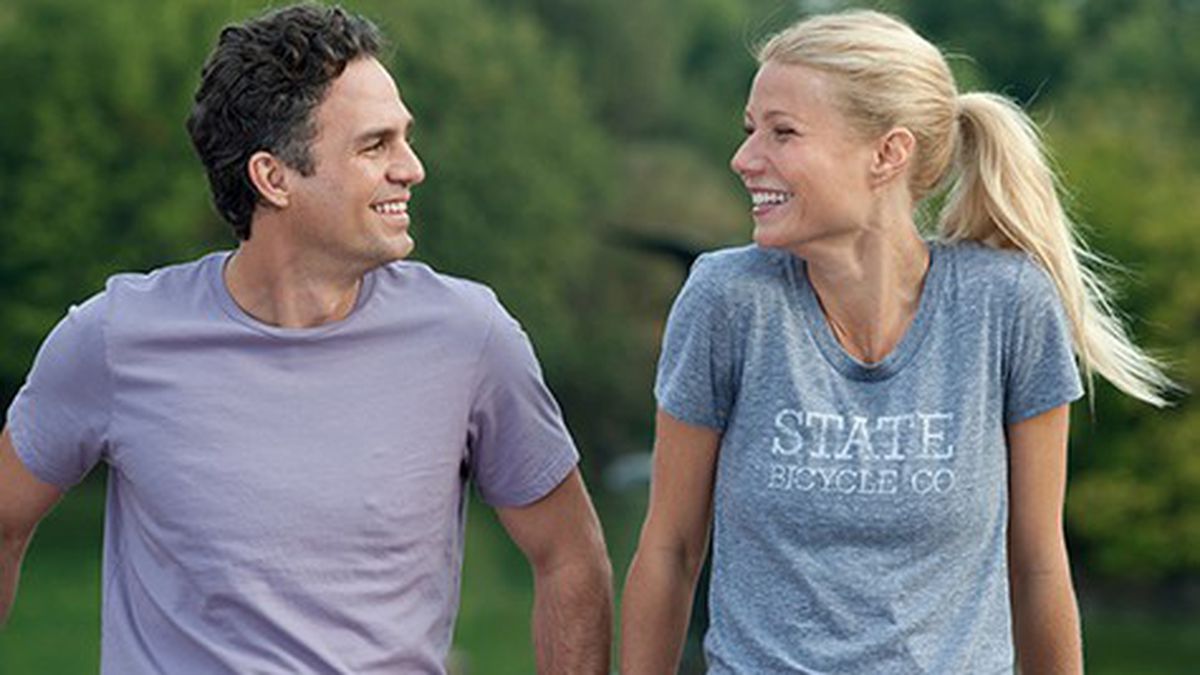 They've got to have it.

Adam (Mark Ruffalo) can’t relax in a hotel room unless he gets housekeeping to remove the TV set. Mike (Tim Robbins) has remained faithful to his wife Katie (Joely Richardson) but he vents his considerable frustration by fighting with his irresponsible son Danny (Patrick Fugit). Compulsive peeper/groper Neil (Josh Gad) has a tough time with subways. Dede (the singer Pink) hits on old boyfriends the way some people binge on doughnuts. They’re all sex addicts in Stuart Blumberg’s surprisingly bright Thanks for Sharing.

“Surprisingly” because frankly we don’t expect much from any movie that features characters sitting in a circle, confessing their sins. How can a filmmaker breathe new life into a shopworn narrative subgenre like the group-therapy comedy? By stocking the cast of sufferers and their associates with talented actors, and having the characters say meaningful, non-clichéd dialogue every chance they get. That happens to be the specialty of Blumberg, co-writer of The Kids Are All Right, who cooked up the Sharing screenplay with Matt Winston for his directorial debut.

The marquee matchup between Ruffalo’s Adam and his new girlfriend Phoebe (Gwyneth Paltrow) is a pleasure to watch, perhaps the most naturally appealing, organically developed love story of the year, even though it occupies no more than half the movie. True to the touchy-feely conventions of the “recovery” genre, Phoebe happens to be a double-mastectomy breast cancer survivor, but that’s not the reason why we can wholeheartedly relate to this urban couple. Maybe it’s the way Adam carefully tiptoes into the relationship, desperately not wanting his hope for redemption to slip away. Or more likely it’s the way Phoebe breaks down and sobs in the midst of stressful on-again, off-again give and take between them. Wounded warrior Adam, an environmentalist by profession, must deal with his goblins: unhinged former bed-buddies, outcall rent-a-dates, ubiquitous Internet porn, etc. But Phoebe’s fears emanate from within herself. Paltrow and Ruffalo carry the film. We could easily be satisfied with them as the only protagonists, but this cross section of New York’s emotionally needy has a range of flavors.

Robbins’ “Big Mike,” a building contractor who’s been clean for years and is now Adam’s group sponsor, has a tipping point of his own: his prodigal son Danny, who comes back to live with his folks after years of drifting. Alcohol, pills, and issues of trust enter into it, but as with Phoebe and Adam it’s the woman who provides the grounded strength everyone needs — Richardson’s no-nonsense Katie, Mike’s rock of salvation. The shared issue for all concerned is true intimacy, as opposed to the easy, forgettable, one-night-stand variety. Big Mike has it made and doesn’t even realize it.

Even an ordinary, maudlin, shared-affliction scenario (which this is not) needs the occasional comic relief. Here, it’s Neil, an infantile emergency-room doctor with an itchy trigger finger. Every time he walks down the street or the hospital corridor he wiggles his digit in the direction of the nearest babe. That gets him into terrible scrapes, and then he lies about his “progress” at the group get-togethers. To cure his compulsions the flabby doc takes up city cycling and makes a fool of himself. When he’s especially down he visits his mother, played by the always pitch-perfect Carol Kane. What Neil evidently needs is a tough gal like recovering nymphomaniac Dede, with her platinum hairdo and rough-riding skills, to force him to walk straight and throw away his porn collection. Of course, we’ve been laughing at/cringing with characters like these for years in feel-good dependency dramas — they’re corny and sentimental but undeniably human. Actors obviously love playing them. The saving grace in Thanks for Sharing is Blumberg’s and Winston’s writing. You can get away with anything if the writing is sharp.

Against this panorama of lovably weak individuals, it takes something special to stand out. Actress Emily Meade, in the role of Adam’s ex-squeeze Becky, has enough high-octane sexual vitriol in her to power a spin-off. When she strolls up to Adam and Phoebe one night in a restaurant and intrudes on their love feast, the entire movie stops and holds its breath. Later, when Adam temporarily has a relapse and lets Becky back in, the ensuing psychodramatic kinkiness begs for a further plot line, but there is none. No time for Becky. We grownups have to accept that we can’t realistically have everything our gaze happens to fall upon — sex, potato chips, Oxycontin, bourbon. Or, in the case of this honestly heartwarming multi-character study, more face time with the inhabitants. We’d probably be disappointed with the rest of their lives anyway.

Breaking Ground on the State of Human Communications