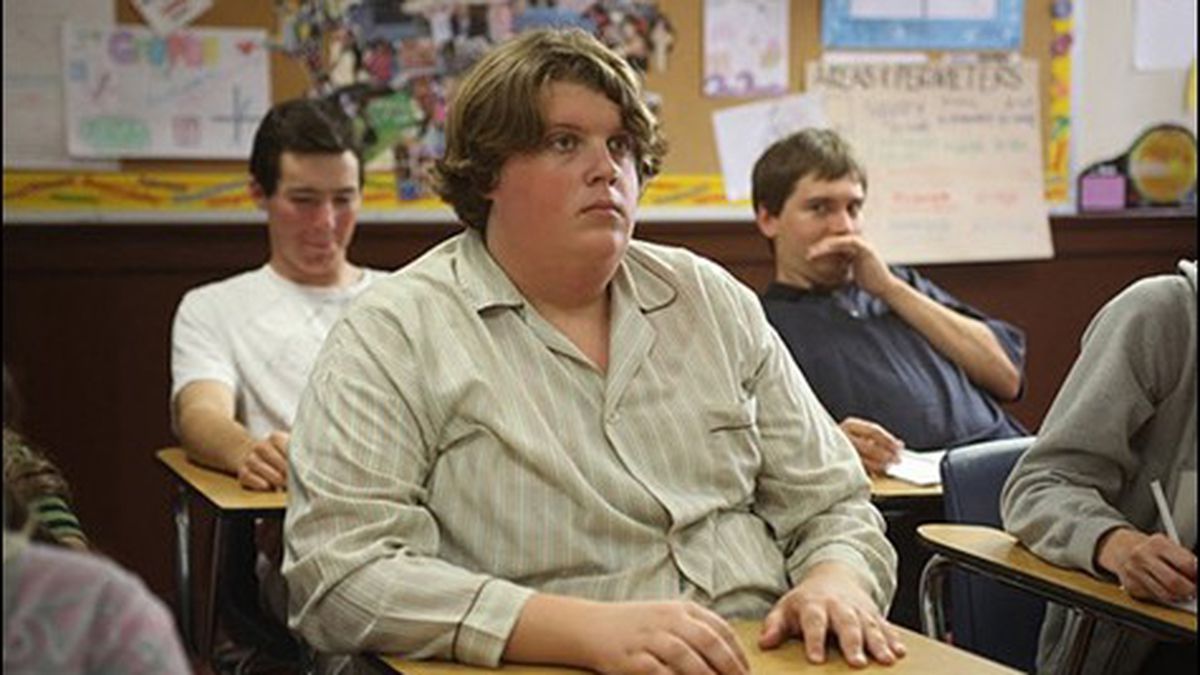 With a scenario as familiar as that of Azazel Jacobs’ Terri, the cast and crew have to work especially hard to overcome a set of built-in limitations. The story of an ostracized teenage boy (Jacob Wysocki), his misfit friends, and the assistant principal (John C. Reilly) who reaches out to them is quite possibly the most commonly used plot line in movies — almost a ritual. It places a definitive burden on the cast and crew. They’ve got to find the hidden wrinkles and crevices in the timeless story, to tease out the nuances in a myth everyone knows by heart. To discover what countless other creative teams have overlooked or underappreciated. To make the old new and relight the stars in the sky. It’s a huge job, and Terri nearly pulls it off.

Obese fifteen-year-old Terri lives with his listless, pill-popping Uncle James (Creed Bratton) in a neglected Southern California bungalow — the film was shot on location in Pasadena, Arcadia, Altadena, and other spots in the San Gabriel Valley. Terri’s parents dropped out of the picture long ago. The trappings of his life are dirty bathroom tiles, beans on toast for dinner, and the mice he catches in the attic and then leaves for birds in the woods. He has gotten into the habit of wearing pajamas to school, but surprisingly he doesn’t get beat up by bullies. They make fun of his “man breasts,” of course, and most of his teachers have written him off as an apathetic loser, but we can see that the bullies are slightly in awe of Terri’s bulk.

In common with many troubled-youth movies — the most recent example is probably Hesher, although Precious also comes to mind — we’re prompted to consider Terri on his own terms and to enter his frame of mind, to walk a mile in his pajamas, so to speak, as imagined by screenwriter Patrick Dewitt from a story he wrote with director Jacobs. It’s a claustrophobic experience, following along as the taciturn young heavyweight shambles through the underbrush. Jacobs, a maker of quirky, personal, indie character studies, has the nerve to set Terri’s routine to a classical vocal piece by Amelita Galli-Curci, a sure sign that this kid is special. How special is arguable. Terri thoughtfully cares for his sick uncle, but the real test is how he matches up with the two other miscreants he runs into in the principal’s office.

Anaesthetized blond Heather (Olivia Crocicchia), the easiest girl in school, and bitter little squirt Chad (Bridger Zadina, stealing the movie) might as well have been waiting in a closet for 26 years, ever since The Breakfast Club, for their big chance in the alienation derby. Naturally the three form a nervous, self-conscious clique. Left to their own devices, they meander around the perimeters of a Gus Van Sant teenage idyll, in a sweeter, more melancholy key, harmless but hardly charmless. At one point it occurs to us that Terri will grow up to be Brian Wilson of the Beach Boys, minus the talent.

The glue that holds Terri together, temporarily, is Reilly’s performance as Mr. Fitzgerald. Reilly is in his Irish cop mode here, basically kind-hearted but unafraid to use the cudgel. In this sort of movie, people like Terri, Heather, and Chad exist to be saved by people like Mr. Fitzgerald, or better yet to do the job themselves. When Mr. F. sighs, “Life’s a mess, but we’re all just doing what we can,” we can see every bit of that frustration and fatigue in his face. As has been noted before (Boogie Nights, Gangs of New York, Walk Hard: The Dewey Cox Story, Cedar Rapids), Reilly is one of Hollywood’s finest portrayers of grunts, our tour guide to the workaday world of security guards and traveling salesmen.

The biggest problem with Terri is that when the plot machinery shifts the focus to Terri, Wysocki (from TV’s Huge) drops Reilly’s handoff and the momentum stalls. The movie avoids clichés but also the big dramatic payoff we have every right to expect. We’re left with a quartet of juicy character roles, a few strong scenes, and the desire to see the climax of Act Three.