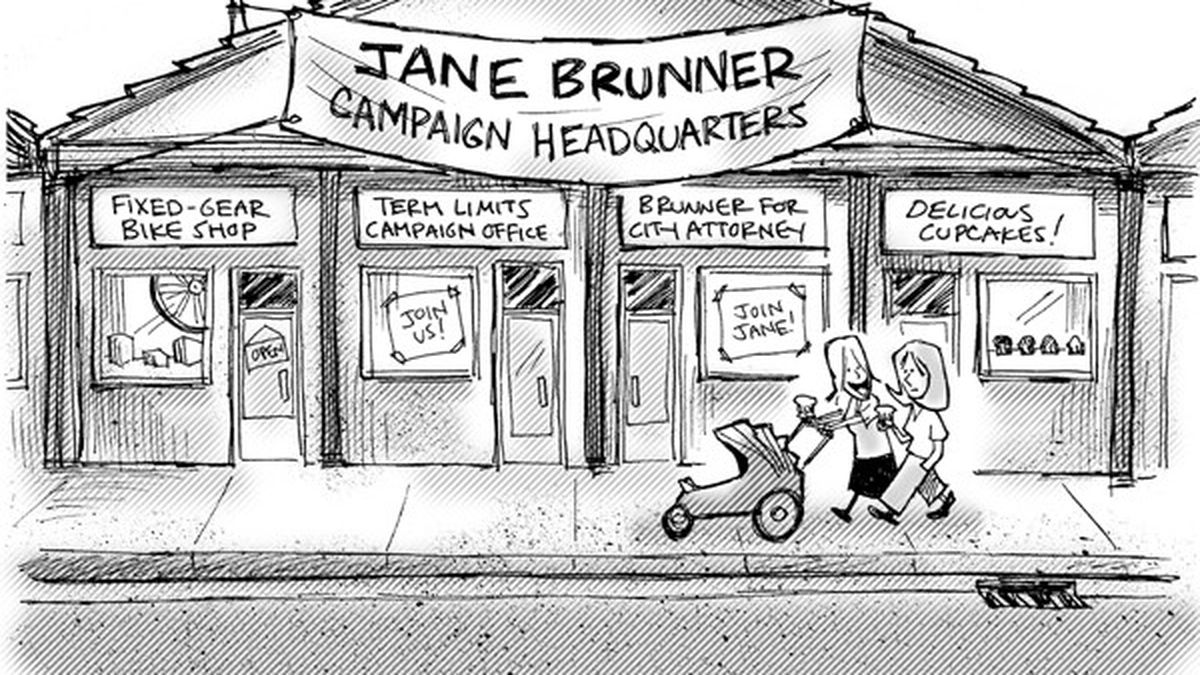 Term-Limits Measure Could Give Jane Brunner an Unfair Advantage

Her campaign manager for city attorney is expected to run the ballot-measure campaign, too.

Oakland Councilwoman Jane Brunner used to oppose term limits. But in recent weeks, she has done an about-face on the issue. In fact, she’s asking the rest of the city council to put a term-limits measure on the November ballot. But what Brunner hasn’t mentioned publicly is that Oakland campaign manager Larry Tramutola is expected to run both her bid for city attorney this fall and her term-limits measure at the same time, potentially giving the councilwoman an unfair political advantage on Election Day.

The dual campaigns — the term-limits measure and the city attorney’s race — could effectively allow Brunner and Tramutola to circumvent Oakland’s limits on campaign expenditures, and thus greatly outspend her opponent, City Attorney Barbara Parker. Normally, Oakland political candidates must adhere to the city’s campaign expenditure rules. The spending cap for the city attorney’s race is $275,000 this year, and candidates are prohibited from receiving individual donations of more than $700.

However, there is no contribution limit or spending cap for ballot measures. As a result, Tramutola could raise and spend unlimited amounts of money for the term-limits proposal. And he could use as much of that cash as he wanted to help Brunner’s campaign for city attorney by featuring her in ads and mailers, advocating on behalf of term limits. The only prohibition is that the ads would not be able to specifically advocate for Brunner’s candidacy for city attorney.

But the ads wouldn’t have to. Simply putting Brunner in the ads, with no mention of her run for city attorney, would enable her to exploit the public’s unhappiness with Oakland’s elected officials, and the current appetite for term limits in the city. On Monday, Tramutola released a poll he commissioned that showed 78 percent of residents believe the Oakland City Council is doing a “fair” or “poor” job. The poll also showed that 62 percent of respondents approve of term limits for the council, and 54 percent are in favor of them for city attorney. Brunner’s ballot-measure proposal would limit councilmembers and the city attorney to three four-year terms. Brunner is giving up her seat on the council, on which she has served for sixteen years, to run against Parker.

If Brunner’s council colleagues agree to put her term-limits measure on the ballot, it would not be the first time that a local politician has been able to get around the city’s campaign expenditure caps. In 2010, there was evidence that Brunner’s ex-mentor, Don Perata, used a ballot-measure committee with no campaign finance limits to help boost his mayoral campaign, which had a spending cap.

As the Express reported at the time, Perata used funds from his ballot-measure committee to pay for a citywide mailer. The mailer touted his support for a proposed statewide tobacco-tax measure, but it appeared to be designed to help his mayoral campaign because it was only sent to Oakland voters, and because the tobacco-tax measure was not on the ballot at the time. In addition, the tax measure and his mayoral campaign shared office space and personnel in Oakland, raising questions as to whether Perata was illegally using the tobacco-tax money to help his run for mayor. It should be noted that Tramutola was also Perata’s campaign manager in the mayor’s race.

In an interview, Brunner said she became a recent convert to term limits after seeing all the candidates who have lined up to replace her on the council. She also denied that she’s pushing the ballot-measure to boost her run for city attorney. “I didn’t bring it forward for that reason,” she said. “I haven’t had any of those conversations” with Tramutola. However, when asked whether she would be okay with Tramutola using her in ads for the term-limits measure, she demurred. “I’d have to think about that,” she said.

Until Brunner makes up her mind and vows to stay out of the term-limits campaign completely and Tramutola hands off the term-limits measure to another campaign manager, the council should reject Brunner’s proposal — not because term limits are inherently a bad thing, but because it could give her an unfair advantage in the city attorney’s race. If Oakland residents really are ready to embrace term limits, then it should be the product of a grassroots’ effort to put it on the ballot, and not the result of a decision made by councilmembers that could aid the political aspirations of one of their colleagues.

Parker’s office, meanwhile, released a long-awaited legal opinion on Monday, stating that ranked-choice voting must be used to select a successor to Mayor Jean Quan if there is a recall election. The opinion represents another setback for Councilman Ignacio De La Fuente, who plans to run for mayor if there is a recall, but is a staunch opponent of ranked-choice voting.

In the opinion, the city attorney states that the city charter makes it clear that ranked-choice voting must be used in all elections involving the mayor, the council, the city attorney, and the city auditor. The only exception is the recall election itself. In that case, city law defers to state rules that say an elected official will be removed from office if a majority of voters cast ballots in favor of the recall.

However, that now seems unlikely. The poll commissioned by Tramutola showed that 56 percent of Oakland voters would cast ballots against recalling Quan.

The San Francisco Bay Guardian announced last week that it expects to be officially purchased by the owners of the San Francisco Examiner in the coming weeks. “Both parties are optimistic that a final contract will be signed shortly, most likely in May,” the Guardian said on its website.

The Guardian also announced that longtime editor and publisher Bruce Brugmann and his wife Jean Dibble are resigning from the paper and that Executive Editor Tim Redmond is taking on the role of publisher and editor.

According to the Guardian, Todd Vogt, president and publisher of the Examiner, said he was proud to be able to help a community institution continue with its mission. “Bruce and Jean have created a legendary publication, and we are happy to be able to give it a new home and the chance to continue its mission,” he said. &#8;