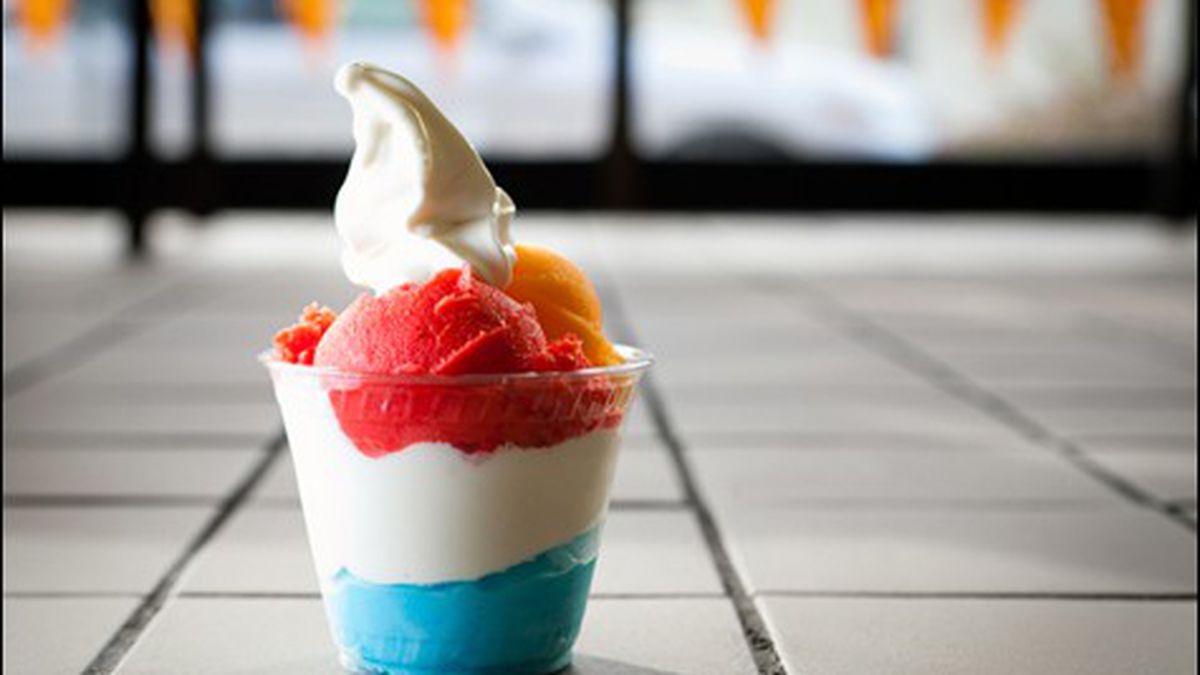 Ten Desserts for the Budget-Conscious

From pork pastries to Italian doughnuts, my top picks for inexpensive sweets.

Don’t misunderstand: I like fine-dining, high-concept restaurant desserts. I don’t mind the little artfully placed dabs of sauce; I can even appreciate the jarring flavor combinations.

But sometimes you just want some small sweet thing at the end of a heavy meal. Sometimes you want to grab dessert to go so you can enjoy it in the comfort of your own home. Quite frankly, sometimes you don’t want to (or can’t afford to) shell out $10 for a showstopper of a composed dessert that might end up being more style than substance.

Fortunately, with all the culinary riches in the East Bay, there’s no shortage of desserts that are as outstanding as they are inexpensive, many of them available for three bucks or less. (Note, for the record, that I’m quite liberal in my interpretation of what constitutes “dessert” and have included many pastries and baked goods and such. In my house, anyway, “$3 dessert” is just another way of saying “breakfast fit for a king.”)

Without further ado, here are ten of my favorites:

For definitive proof that inexpensive desserts can be just as sophisticated as their pricier counterparts, look no further than Cupkates. Headed by “Chief Cupcake Officer” Kate McEachern, the Bay Area’s first mobile cupcakery has been slinging its cream-topped wares in Oakland, Berkeley, and Emeryville since 2009 — well in advance of the current food truck craze.

But cupcakes? Sophisticated? At $3 a pop? Not to worry: The tiramisu cupcake will make you a believer. A deconstruction of the popular Italian dessert, McEachern’s cupcake version captures the taste of the original while avoiding the characteristic sogginess that normally makes tiramisu one of my least favorite desserts. So instead of soaking ladyfinger cookies in espresso and booze, she makes a crust out of crushed ladyfingers and bakes that right into the cake itself, then soaks the cake in brewed espresso. This being a kid-friendly cupcakery, McEachern eschews the alcohol altogether, but does nod toward the traditional flavors by topping off the whole thing with a light, barely-sweetened mascarpone frosting.

You wouldn’t think it, but the East Bay’s best rendition of those sugar-dusted Italian doughnuts known as zeppole come from a gourmet food truck that’s owned and operated by a Vietnamese American. Just about everything on the menu at DanVy Vu’s truck, Go Streatery, is tasty, but her lemon ricotta doughnuts — just $3 for a generous sackful — are exceptional. What sets these zeppole apart is the contrast between their soft, slightly custardy interior and a crunchy exterior so resilient that the doughnuts never seem to get soggy, even after they’ve been sitting in the bag for an hour.

Vu says developing her zeppola recipe was a year-long labor of love, inspired by her passion for a savory — but similarly crispy — Vietnamese fritter called bánh cay, and by her husband’s childhood memories of his Italian grandmother’s zeppole. Vu’s then-seven-year-old son served as her chief taster.

“We had a version of zeppola for every occasion,” she recalled. “For his birthday that year, I piled a plate high with zeppole and stuck candles in it. He was delighted.”

You will be, too.

Fried-dough lovers should also check out Oakland’s Boniere Bakery, where on Fridays and Saturdays you can buy rustic-looking, irregularly-shaped doughnuts called malasadas, still warm from the fryer. These are pillowy little things, covered in cinnamon sugar, with a satisfying chew and crunch to them — it takes a high level of self-control not to scarf down three or four in one sitting. At 75 cents apiece, they’re a flat-out bargain.

Owner Diane Jatczak explains that malasadas come from Portugal by way of Hawaii, where her parents grew up and where the fried treats are quite popular — especially on Fat Tuesday, when they’re traditionally eaten. The malasadas at Boniere are made using a family recipe: Lemon extract and a secret spice blend are added to a basic raised yeast dough, and then the doughnuts are fried, free-form, in hot oil. Need I state the obvious? These go amazingly well with a good cup of coffee.

Pushing the limits of what can rightfully be considered a dessert, we come to the husband cakes (or lao gong bing) at Oakland Chinatown’s Wonder Food Bakery. You’ll find these circular, black-sesame-seed-flecked pastries (not cakes, really) in a small display case on top of the counter at Wonder Food, and their price — $1.35 for five! — makes them arguably the best deal on this entire list. These flaky little pastries have a savory-sweet filling that brings to mind Cantonese barbecued pork; there are even little bits of pork inside. All in all, it’s a strangely addictive combination of flavors and textures, and so much better than the latest creation of some pastry chef who’s decided to add bacon to everything, willy-nilly.

Ask folks who grew up on the East Coast about Italian ice or frozen custard, and you’re likely to spark fits of nostalgia. For the longest time it was well-nigh impossible to find the stuff in the Bay Area, but then Flavor Brigade opened in Oakland’s Dimond District. Owner Braedon Galloway’s Italian ices — or water ices, as they call them in Philly — are the real deal: like brightly colored, super-smooth sorbets. And his custard — think ridiculously rich soft-serve ice cream — is no slouch either. Layer the two together and you get the ultimate hot-weather treat, what Galloway calls the “2nd Street.” Three dollars buys you a “small” cup that in any other ice cream parlor would probably be considered a large.

There aren’t a ton of dessert options at Smoke Berkeley, the Texas-style barbecue joint that opened a few months ago on San Pablo Avenue. But Chef Tina Ferguson-Riffe won’t hesitate to tell you about the blue ribbons her pies have won at Texas state fairs, and once you taste her chocolate pecan pie ($3.50 a slice) you’ll understand why. Smoke’s version is more like a slightly oozy fudge brownie — complete with the crackly top and chock full of pecans — than a typical pecan pie. It’s delicious, but definitely different.

According to Ferguson-Riffe, a traditional pecan pie is loaded with light and dark corn syrups — hers isn’t, which is why it doesn’t have the sticky, gooey consistency people associate with the dessert. She also ups the ante by using high-quality Callebaut dark chocolate, from Belgium.

Only in a food writer’s bizarro-world would $5 be considered cheap for a slice of pie, but Crixa’s pies are the best. The slices are huge, and eating one all by yourself is as much of a decadent indulgence as any dessert you might get at a restaurant. The price for a slice actually ranges between $4 and $5, depending on what fruits are in season — my favorites are anything involving stone fruits during the summer months, and Crixa’s pumpkin pie (ordered several weeks in advance) has become an annual Thanksgiving tradition. The pies here are a somewhat unusual deep-dish style, perfect for those who love lots of crust. And while the all-butter crust isn’t the crisp variety, it is very, very tasty.

You never know what you’ll find in the display case at La Bedaine: tarte tatin, little buttery croissants, those ethereal cream puffs called croquembouche. One of the most wonderful items — if not the most obviously French — is Chef Alain Delangle’s orange tea cake, each loaf the size of a small pound cake and topped with almonds. It’s an incredibly moist and fragrant little cake, and the nuts and the nicely browned exterior provide an appealing textural contrast. Each cake sells for $6, but only a real champion cake-eater would consume the whole thing at once — it’s perfect for sharing with two or three other diners over a pot of hot tea.

For something more obviously French, try the $3 pain au chocolat from Alameda’s Feel Good Bakery — it’s as good a version as you’ll find in the East Bay. Biting into one of these bad boys, the first thing you’ll notice is the crunch and the buttery little shards that’ll fly all over your plate and onto your shirt. This isn’t that limp, bready kind of croissant that you find all too often, even at respected bakeries. Just as importantly, Feel Good uses quality E. Guittard dark chocolate in its croissants, and the result is a less-sweet and more intensely chocolaty filling.

I’ve been known to order bread pudding every single time I see it on a menu, and the Bananas Foster bread pudding at Angeline’s Louisiana Kitchen, in Berkeley, is one of the best. This is the restaurant’s take on the classic New Orleans combination of bananas, vanilla ice cream, and rum. Here, they’ve dispensed with the ice cream, folded the bananas into a dense bread pudding, and added the rum to a decadent caramel sauce.

At $6.95, this is on the upper end of my list, but again, it’s a dessert clearly meant to be shared. I can testify to having once tried to eat the entire portion myself — after a gut-busting dinner of barbecued shrimp, hush puppies, and too many glasses of sweet tea. It was, as the kids say, an epic fail.

But that doesn’t mean I won’t try again.