.A Bike Rack on Every Corner

Bicycle parking is gaining acceptance as a wise investment. 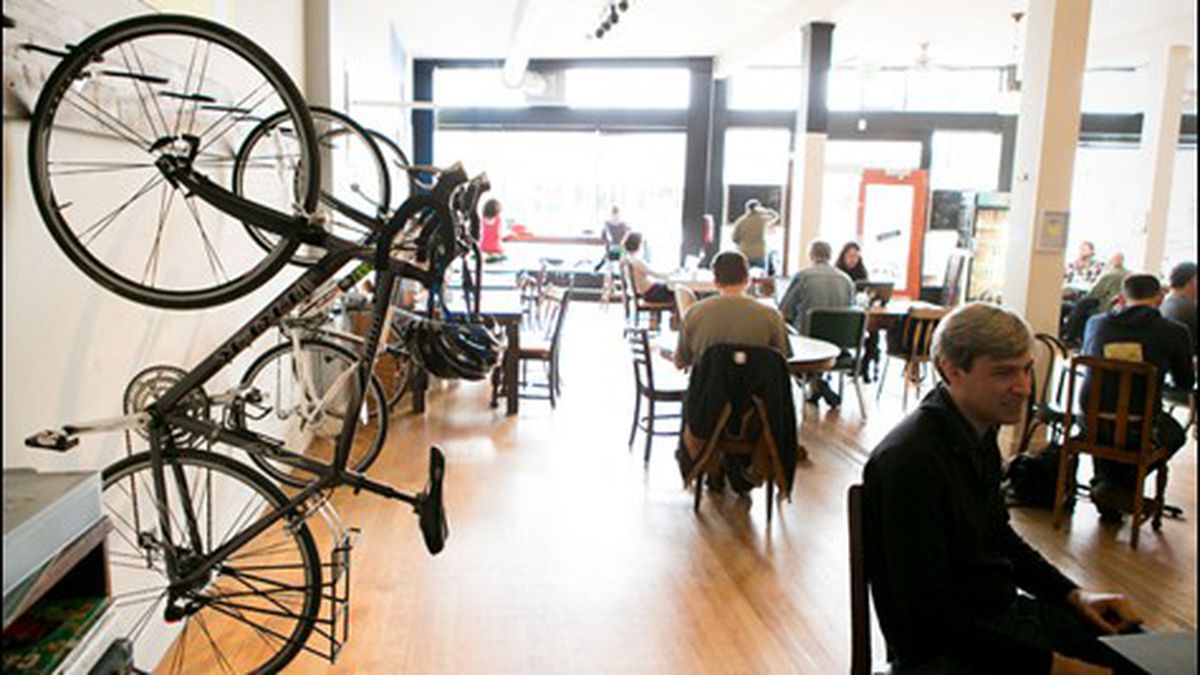 For Brian Drayton, bike parking is not just a convenience; it’s a necessity, a mission, a movement in the making. Richmond Spokes, the organization he founded in early 2009, provides valet bicycle parking at about 25 small- to medium-size events throughout the Bay Area each year. But more impressive than that is his sheer ambition.

“I want people to understand we can use bikes for everything, everyday,” Drayton said. “There should be as many bike-parking facilities as there are gas stations in the world.”

In the East Bay, at least, bike parking is booming. BART is increasing capacity at its stations, cities are investing more in public racks, businesses are bringing bikes indoors or designing their own outdoor parking, and bike-advocacy groups are making valet services at large events the new norm. Parking may be one of the least sexy elements of bicycle infrastructure, but it’s beginning to garner serious attention.

Drayton is already looking to expand his model into other cities such as Los Angeles and Atlanta, allowing independent event producers to rent out racks and staff their own valets. No event should be without bike parking, he believes, whether it’s a block party, a music festival, or an art show. In Oakland, for example, Richmond Spokes has provided free valet parking for The Fox Theater, Art Murmur, and Oaksterdam University.

The East Bay Bicycle Coalition provides a similar service throughout Alameda and Contra Costa counties, though it tends to focus on larger events. Executive Director Renee Rivera said the organization works with contractors and volunteers to staff about thirty events a year, parking anywhere from dozens to more than a thousand bikes at a time. Earlier this year, the coalition hired its first dedicated bike-parking program coordinator.

The cost to a city or major event producer for providing valet bike parking runs around $1,000 a day, Drayton said, but there’s a return on the investment. “Most of the promoters are really motivated by getting as many people to their event as possible,” Rivera noted. “You can bike and park right in the center or right at the entrance to the event. It’s just so convenient.” In Oakland, events drawing more than 5,000 people are required to offer bike parking, yet producers of smaller events often opt to provide it for the benefit of attracting more visitors.

In recent months, BART has embraced the same approach to increase ridership. The agency finished installing 320 new bike lockers at twenty stations throughout the East Bay in January, and is on the verge of placing 160 more. These weatherproof, highly secure lockers have a forty-year lifespan and cost $2,500 each, said BART bicycle-access manager Steve Beroldo. The lockers rent for three cents an hour via an electronic BikeLink debit card.

BART is also in the midst of designing two new bike stations in Oakland similar to the existing facility at the Fruitvale station. One will occupy a street-level storefront on Broadway above the 19th Street stop, providing supervised storage for up to 150 bikes in addition to a host of services. The other will be integrated into the new MacArthur Transit Village, adding about 175 spots to the 125 racks and lockers currently available. Both bike stations should be complete around the middle of next year. It’ll be none too soon; at many East Bay stations, Beroldo said, BART simply can’t keep up with demand for bike parking.

Meanwhile, the agency is updating its bicycle access plan, a far-reaching document that guides policy on parking, on-board access, wayfinding signs, and related issues. Again, the intent is rooted in dollars and cents at least as much as it is in goodwill and reducing greenhouse gas emissions. “We want people to be able to get to the stations,” Beroldo said. “It’s a way to get more bicyclists riding BART.”

Where once bicycles were considered antithetical to growth and sales tax receipts, in cities like Oakland, Berkeley, and San Francisco, they’re beginning to be seen as economic engines. In an effort to squeeze more bike parking into crowded commercial districts, the City of Oakland is experimenting with in-street bike parking, where racks are placed directly in the parking lane rather than on sidewalks. At least three demonstration installations will go in this summer, said the city’s bicycle program manager, Jason Patton — likely along College or Piedmont avenues, in red zones where they won’t displace any existing car parking.

Store-owners themselves are increasingly enthusiastic about bike parking. For two and a half years, Actual Cafe in North Oakland has sacrificed some all-important interior table space for wall-mounted parking for ten bikes. Owner Sal Bednarz says the racks are always in use, and on the weekends they tend to attract road warriors with high-end rides who probably wouldn’t otherwise visit.

Taking a cue from Bednarz (who himself borrowed the idea from a few San Francisco stores), brothers Christopher and Eric Marquez installed wall-mounted racks in their new Temescal cafe, Arbor. Originally billed as a “bicycle cafe,” Arbor also offers a bike pump and repair stand, and stocks bike-delivered Bicycle Coffee.

Perhaps nothing illustrates the growing cachet and broad appeal of bicycle parking quite like parklets, one of the nation’s hippest trends in urban design. The majority of parklet designs throughout the Bay Area have integrated bike racks, as will most if not all of the seven parklets coming to Oakland for a trial period this summer. Actual Cafe is sponsoring one of them, and it’ll feature another dozen spots to go with the six already on the sidewalk.

“People who are redesigning communities find that bike parking helps create economic corridors,” Drayton said. “The bike is the crunchy granola center of the new economy.”

How to Safely Park Your Bike

A cynical bicyclist once said, “If you own a bike, it will get stolen.” We’d prefer to be more optimistic, but it’s true: Bike theft is a rampant crime, especially in the Bay Area. Fortunately, there are ways to avoid it. The first and most important thing to consider is where you’re locking up. Bike parking comes in a range of forms, from standard sidewalk U-racks and corrals to secure lockers and interior storage. The safest approach is some combination of the above with active supervision, such as at a bike station or valet. The most common option, however, is also the most susceptible to theft: the sidewalk U-rack. But follow a few basic steps and you’ll greatly reduce your risk:

– Buy a high-quality U-lock that’s as small as will accommodate your bike.

– Find a designated bike rack, or, if none is available, a secure, immovable object that won’t allow your bike to be slid off the top.

– If you can help it, don’t leave your bike parked outside in a public place overnight. Good luck.&#8;