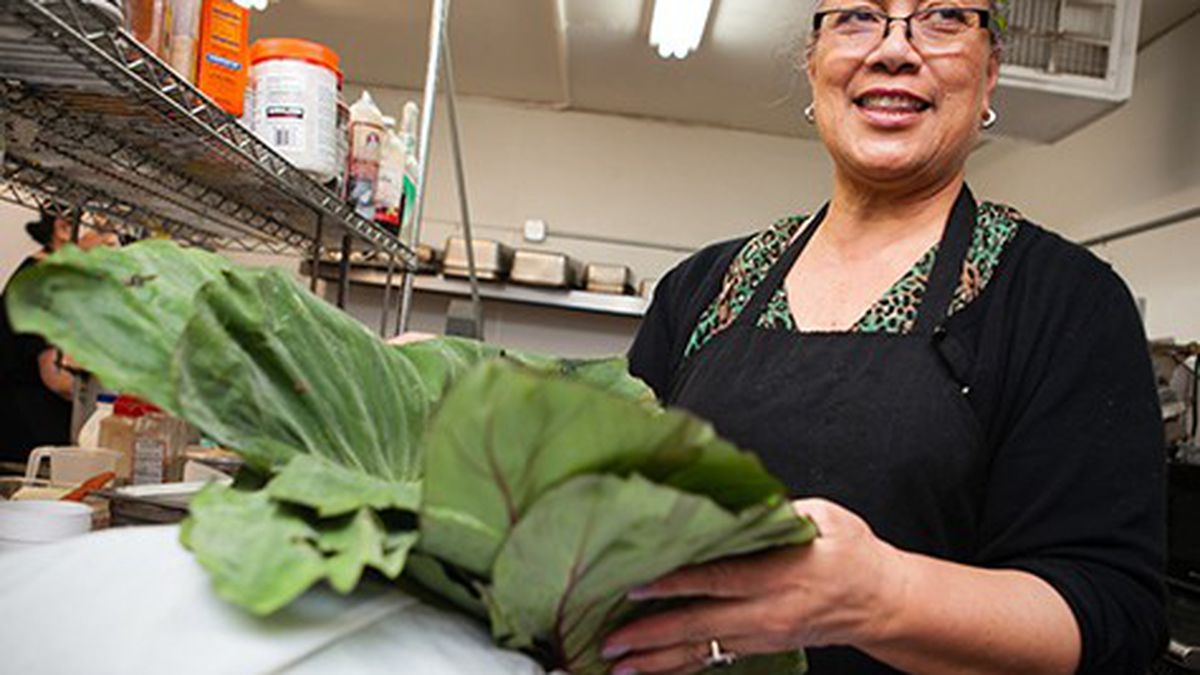 When my all-time favorite Samoan barbecue restaurant — Mo’s Hut, in East Oakland — and one of Alameda’s better Hawaiian plate lunch shops (Kau Kau Korner) both closed at the end of 2015, I wondered: Did every good Polynesian eatery in the East Bay go out of business overnight?

Later, I realized that I’d been a bit too nearsighted and Oakland-centric in my search for a decent scoop of crab mac salad. What I needed to do was head down to Hayward, a city that’s home to one of the largest populations of Pacific Islanders in the country. Specifically, I needed to eat at Katalina’s Island Grill and Grocery, the only bona fide Tongan restaurant in the entire East Bay.

Even in Hayward, where plate-lunch aficionados can choose between a half-dozen L&L-type Hawaiian fast food restaurants, the year-old Katalina’s is something of an anomaly — a family-run spot that serves home-style island dishes instead of your typical mix-and-match teriyaki grilled meats. Katalina Pahulu, the restaurant’s eponymous owner, said that on warm-weather Saturdays she’ll make a big batch of macaroni salad and set up a grill outside. But the main focus is on slow-cooked comfort dishes — the sort of food you’d find if you traveled to Tonga, Fiji, or Samoa. In the words of several enthusiastic online reviewers, this is “the real deal.”

Here in the Bay Area, our popular image of Tongan culture owes too much to the outsize presence of kitschy, culturally appropriative tiki bars. Katalina’s is more or less the exact opposite of that. If anything, the restaurant resembles a general store or an old-fashioned pancake house — the charmingly no-frills kind of place you’d stumble upon out in the Sierra Nevada. A small grocery section is stocked with canned mackerel, giant jars of mayonnaise, and other pantry items.

The closest thing to something you might find at a tiki bar is the handful of gorgeous black-and-white photographs of Polynesian dancers that line the walls, but these are hardly kitsch: The featured dancer is Pahulu herself. The photos date back to when she and her husband worked at Disney World’s Polynesian Village Resort during the Seventies — as a dancer and musician, respectively.

Katalina’s is Pahulu’s first restaurant, and the place is, among other things, a testament to its proprietor’s work ethic. Pahulu is there at 8 a.m. to cook the day’s first batch of food, and she stays through the early afternoon, when she turns the kitchen over to one of her three adult children — Annabelle, Helen, or Alani — and heads off to her other full-time job at Delta Airlines. The next morning, rinse and repeat. If you’re like me, this is the kind of scrappy, family-run small business you root for — assuming, of course, that the food is up to snuff.

What, then, is Tongan cuisine? At Katalina’s, all of the food is served from a steam table and consists of a lot of slow-cooked meats, all prepared in small batches over the course of the day. You can order dishes a la carte, but every customer I saw went with one of the combo plates, which come with a choice of starch: big, starchy hunks of taro, sweet potato, or unripe banana. A three-entrée plate will only run you $15 and, unless you’re a much heartier eater than I am, leftovers are inevitable.

If you aren’t too fat-averse, you’ll want to start with the restaurant’s most unusual and hardest-to-find item — turkey tails, a dish that’s beloved in both Samoa and Tonga, which import several thousand pounds of the fatty delicacy each year from the United States, where most customers consider it to be an undesirable waste product. (Southern cooks, who sometimes use these tails in place of salt pork when preparing collard greens, know better.) At Katalina’s, the tails are brushed with teriyaki sauce and roasted slowly until the meat is impossibly soft. Any home cook who knows that the choicest morsel on a roast chicken is the butt will love this (though perhaps only in moderation): Turkey tails are even fattier, with an even greater surface area of crisp, caramelized skin — and are about ten times as big, to boot.

The menu at Katalina’s is dotted with dishes that speak to the global influence on Pacific Islander cuisine. For instance, one of the most popular items is the corned beef and cabbage — a testament to the islands’ relative proximity to New Zealand. As Pahulu put it, “You don’t have to be Irish” to love this pub staple. Again, the corned beef had been poached gently for hours until it was lush and tender, and the cabbage offered a welcome bit of sweet, vegetal freshness.

Tongans’ love of corned beef also manifests itself in other forms. One of my favorite items was Pahulu’s version of creamed spinach, which was spiked with a ton of cream and coconut milk and a small amount of canned corned beef — the softest, fattiest bits cooked down until they’d yielded all of their salty, meaty flavor. Lemon pepper gave the dish a distinctive, addictive tang.

Another highlight was a dish I haven’t seen elsewhere in the East Bay — what Tongans call lu pulu, Samoans call palusami, and Hawaiians call lau lau. Each island cuisine has its own take on the dish, but the gist of it is that taro leaves are wrapped in foil — along with coconut milk and, often, meat — and then baked until the greens achieve a texture similar to the aforementioned creamed spinach, but with a musky flavor that reminded me of my favorite versions of Indian saag. Katalina’s serves one version with corned beef and another with lamb; both are the kind of unique dishes you’ll be hard-pressed to find anywhere else.

Even after you’ve eaten all of the above dishes, you will have barely scratched the surface at the Katalina’s steam table, which, as a sign promises, is “the only island table with twelve or more items daily” — the exact number depends on when you arrive, and how quickly Pahulu and her children are able to restock the supply. There’s a fish and coconut milk dish that wasn’t available during any of my visits. Other rotating menu items include ota (a poke-like raw fish preparation); a very simple but tasty chicken curry; a gingery version of chop suey; and pork hocks braised until the meat and gelatinous skin practically fall apart.

If I have any criticism, it’s that there was a sameness to a lot of the dishes, especially in terms of how rich and heavy they are. Order accordingly. (Turkey tails, pork hocks, and corned beef might not be an ideal trio if they’re all part of the same meal.)

A note to mainlanders and East Asians who, like me, might find the starchy default sides a bit difficult to get used to: You can always opt for white rice. It helps, too, if you order a mango otai — a refreshing drink made with fresh mango and coconut pulp, served in Big Gulp-size foam cups. For dessert, if Pahulu’s pineapple pie, topped with a big dollop of cool whipped cream, is available, don’t hesitate to get it.

In the back of Katalina’s, there’s a stage area with a full drum kit and a tricked-out sound system. Sometimes there’s live music on the weekend, and eventually Pahulu says she’d like to do Polynesian shows each Friday and Saturday night — something like the family-friendly performances that she and her husband used to put on back in their Disney resort days. During my last visit, there was a humbler performance: a little Tongan or Samoan girl, maybe seven or eight years old, singing a charmingly off-key rendition of “The Star-Spangled Banner” into a live mic. Somehow, it was the perfect soundtrack for my meal.

Previous ArticleParents Are Outraged that an Ex-49er, Who Is on Trial for Sexual Assault, Spoke to Students About Self-Discipline