.Bourbon by the Bay 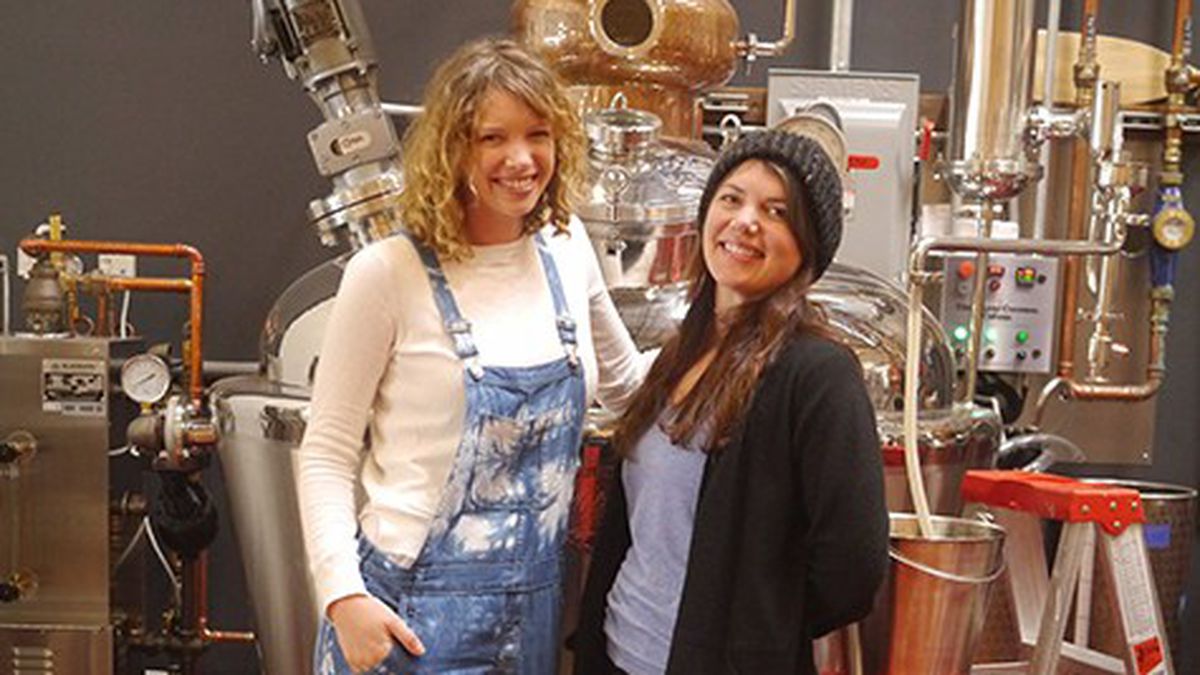 They say that sisters who distill single malt whiskey together stay together — or something like that, anyway. At least that’s the case for Samantha and Alexandra Blatteis, a pair of Oakland-born twin sisters who will launch their new craft spirits company in the coming months.

Housed in a Jack London district warehouse, Home Base Spirits joins an emerging community of craft distillers in Oakland, which, until recently, hasn’t had a single active distillery since the onset of Prohibition. Then, last fall, Wright & Brown Distilling, a small-batch whiskey distillery in West Oakland, opened, followed a couple of months later by the Oakland Spirits Company, a gin- and brandy-focused distillery in Uptown.

Part of the reason that the craft distilling trend has taken longer to take root in Oakland than other comparable movements — in, say, the worlds of beer or wine — has to do with the burdensome legal restrictions that govern the production and sale of spirits, particularly in the State of California, where you need to go through a lengthy process and obtain a prohibitively expensive permit to even begin to practice distilling whiskey. (There’s no spirits equivalent to brewing small batches of beer in your garage — not legally, that is.)

To be clear, this is why Home Base Spirits won’t technically be distilling its own whiskey, at least not at the outset, though co-owner Samantha Blatteis said opening their own distillery is very much the sisters’ long-term goal. For now, Home Base’s spirits will be distilled at Sutherland Distilling (a Livermore-based rum and vodka distillery) using the Blatteis sisters’ recipes and under their close supervision. Their first product, a 350-gallon batch of bourbon, has been aging in charred oak barrels for the past eight months. Once a batch of booze is ready, the Blatteises will bring it back to their Jack London district facility, where, in some cases, they’ll flavor the spirits with additional herbs or other botanicals, bottle them, and then sell them to bars, restaurants, and liquor stores under the Home Base Spirits brand.

The decision to apply for what’s known in the trade as a “rectifier’s” license instead of a distiller’s license was “completely a matter of budget,” Blatteis explained. Apart from the permitting issue, the Blatteis sisters wanted to specialize in whiskey and bourbon, which are notorious for how long they take to properly age — often upwards of three years, or even ten or twenty years for the really high-end stuff. Blatteis said she knows many folks in the craft distilling industry who have opened new distilleries only to have to wait years and years before they have anything to sell. Why not start their business now and put the money they make toward building a distillery later on?

The Blatteises are both relative newcomers to the distilling industry and are mostly self-taught, though Alexandra took a workshop at MB Roland, a bona fide Kentucky whiskey distillery. Samantha, on the other hand, has spent much of her career working with farmers — including several years working for the New York-based Greenmarket network of farmers’ markets. So it makes sense that Home Base Spirits would tout its use of California botanicals and sustainably grown corn, barley, and rye.

Home Base’s first batch of bourbon is probably still a few months away from being ready, but Blatteis expects that it will pick up some nice caramel-y notes from the oak barrels, and some honey and chocolate flavors from the malted barley. The idea is for the bourbon to be of high enough quality to drink neat, but also priced low enough that local bars and restaurants won’t find it too expensive to use in cocktails. Other products in the works include a single malt American whiskey and an amaro — a bitter Italian liqueur flavored with various herbs.

It should be said, too, that there’s a perception that the distilling industry is a male-dominated field, even if that hasn’t been strictly accurate for quite some time now. Blatteis said she’s aware of that perception, but hasn’t found it to be much of a hindrance so far.

“Before we decided to start this business, we had been enjoying whiskey for a long time,” Blatteis said, explaining that she and her sister are longstanding members of a women’s whiskey tasting club. “It’s just a fun community of ladies that we enjoy drinking with.”

Previous ArticleParents Are Outraged that an Ex-49er, Who Is on Trial for Sexual Assault, Spoke to Students About Self-Discipline