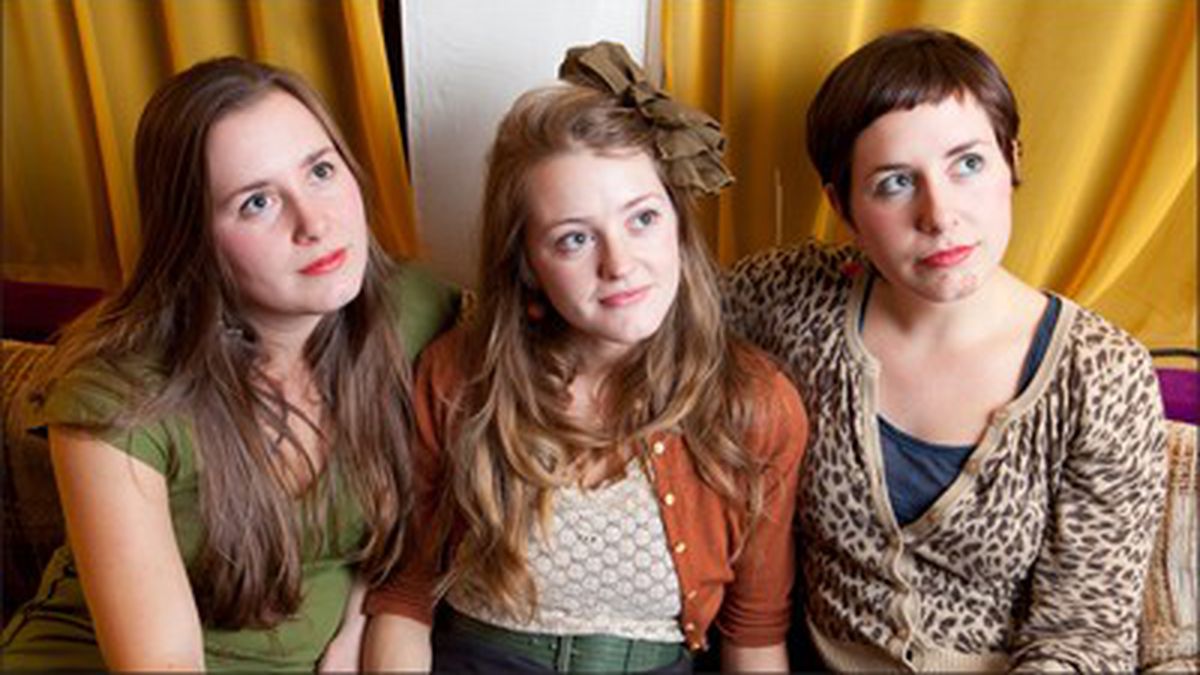 An Oakland-based folk trio clings to its anachronistic sensibility.

Nature doesn’t bless all siblings with the ability to harmonize, but it does provide genetically similar vocal chords. Thus, brothers and sisters often sing best with each other: The Jackson 5, The Hawkins Family, The Neville Brothers, The Andrews Sisters, DeBarge, the Marley dynasty, and Los Lonely Boys constitute only a partial list of celebrated music groups whose members spawned from the same womb. Oakland’s own T-Sisters could be the latest addition to the pantheon.

Rachel, Chloe, and Erika Tietjen grew up in Berkeley and Piedmont, and currently live together in a roomy East Oakland warehouse. The three sisters have always collaborated on projects, from the dress-up plays they mounted in their grandmother’s attic, to the two musicals they co-produced, to their current series of variety shows. Now they also perform as a vocal trio, singing in an old Appalachian style that had its revival about ten years ago with the Coen Brothers‘ movie O Brother, Where Art Thou?

They demonstrated last Wednesday night, sitting on a couch in their living room. Erika counted off unobtrusively. Mother of all, all over us/We are a bundle, confused, and disgruntled, the sisters sang, using close Appalachian harmonies. They slurred the two “alls” to make them sound like one sustained note. At times they switched parts, with Chloe shifting from high to low and Rachel going from low to high. Most listeners won’t notice, Erika said. “A lot of people can’t necessarily tell our voices apart, but they hear that something weird is going on.” The effect is warm and woolly. Chloe, who wrote the song, says that the “Mother” of the first line is a metaphorical term. “Kind of getting people to remember things like —

The T-Sisters usually sing a cappella, though they’ll occasionally add a dulcimer or a guitar. Their harmonies are small and simple — usually hovering on a third or fourth interval. But there isn’t a slack moment. The T-Sisters eschew modern adornments, and try instead to be as ascetic as possible. It’s a sound that’s become increasingly popular in the local music scene.

“I think we learned that style through — oh, the zeitgeist,” she said, sitting with Chloe and Erika at their kitchen table. “More people are listening to that kind of music.” She added that the three of them grew up listening to folk music, popular R&B, and so-called “jock jams,” since their mother was an aerobics instructor at the Oakland YMCA. They weren’t aware of the Appalachian stuff until it came back in style.

And the T-Sisters continue to get more old-fashioned over time. They own a sewing machine and a record player. Their cupboards contain jars of dried beans, tea leaves, and spices. Even their television has a cloth draped over its screen, as though to hide the ugly face of technology. They seem to dwell outside of modern society. And they seem to like it that way. Not for nothing do the Tietjens call their operation “Chthonic Theater” — meaning a theater that exists in the underworld.

“Cthonic deities in Greek mythology were the opposing deities to the Olympians,” Chloe explained. “So they’re a lot more feminine, and closer to the earth.”

True to its name, Chthonic Theater is its own self-contained purgatory. It exists only for people in the know. The Tietjen sisters use the term to describe all of their artistic enterprises — including their 2005 musical, A Murmured Tale, and current production Ship of Fools. But mostly it refers to a variety show that they produce in their warehouse. Modeled after 19th-century vaudeville, it features sketch comedy, puppetry, magic, interpretive dance, and a house band at the end of the night.

The theater itself is the basement of their warehouse apartment, which lies in an industrial zone near the 880 freeway. It was just a building shell with an open floor plan when the sisters moved in two years ago, but they’ve turned it into the kind of netherworld that suits their sensibility: Potted ficus plants line the walls. The lamps are decorated with statuettes and a bust of Saint Peter. The place is both an anachronism and an odd paradise.

The whole point was to have sole curatorial power and not be constrained by an outside mediator or venue, Rachel said. And it seems to work. Home theater venues are enjoying a resurgence in the Bay Area for exactly those reasons. “We were more interested in curating our own production and creating an environment for sharing where everyone benefits,” Rachel wrote in a recent e-mail. Moreover, she added, “it’s a way to bring creative people into our lives, which comes in handy when we are putting on a larger production like one of our musicals.”

Running a home venue can be taxing, particularly at the level that the T-Sisters are doing it. They only publicize via newsletter, Facebook, and word-of-mouth, but the word gets around fast enough to draw one hundred people to each show.

It helps that the T-Sisters are extremely close-knit. Twenty-four-year-old Rachel and Chloe are identical twins. Erika is 26, and says she behaved like a typical older sister for much of the girls’ childhood. They sang together as kids, and Erika would conduct. The three of them attended Piedmont High School, sang in the a cappella choir, and hung out in roughly the same circle. They attended separate colleges but continued performing together. Generally, the three of them handle different aspects of the artistic process. Rachel, the artist, does costumes and set design. Chloe, the literature buff, writes scripts and song lyrics. Erika, the self-proclaimed “harmony tyrant,” writes arrangements and leads songs.

The T-Sisters will inevitably get bigger, even if they remain cloistered in a warehouse performance space. They’re playing more gigs around town and recording an album with Mike Marshall. With attendance rising, they make ultimately have to move the variety shows to a legit venue. For now, though, they like having a cottage industry. “There’s something about the cabaret, I guess,” Erika said.

“It’s a great networking place, too,” Chloe added. “Like performers will approach each other after the show and say, ‘Hey, I’d love to play drums with you.’ Or, like, ‘Hey, do you want to perform at this thing?'”