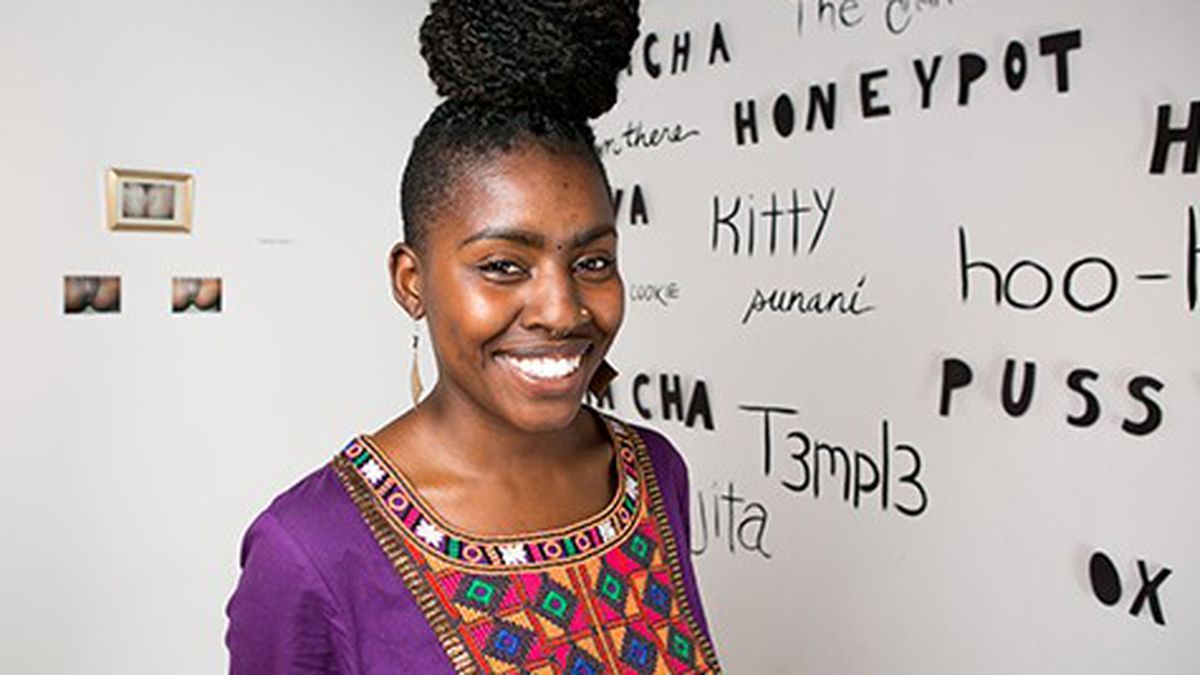 The local artist and activist is planting the seeds to make alternative reproductive health services accessible to marginalized communities in the East Bay.

At the opening reception of Malidoma Collective’s art show, #UGods, at Krowswork Gallery, during July’s First Friday, Sumayyah Franklin greeted people with an inviting smile as they nervously peeled back the curtain of her installation. Titled “The Yoni Temple,” the enclosure featured an altar with objects alluding to female fertility as well as a wall inscribed with terms — both anatomical and colloquial — used to describe women’s sexual organs.

But the aspect making visitors nervously fidget as they entered the space was Franklin’s photography of women’s yonis prominently hanging on the central wall. The term yoni comes from the Sanskrit word for vagina, although the word’s literal translation, according to Franklin, is something closer to “sacred passageway.” Each photo on the wall revealed vulvas of various shapes, sizes, pubic-hair patterns, and skin tones — a veritable rainbow of women’s anatomical differences. As viewers apprehensively entered the space, the gregarious Franklin engaged each person in a conversation about shifting the culture surrounding female sexuality from one of shame to one of empowerment.

An Oakland native in her mid-twenties, Franklin produces community events focused on bringing alternative reproductive health services to underserved demographics — often in creative ways that draw from her background in the arts. She is a practicing doula (a traditional birthing coach who assists women through pregnancy, birth, and the postpartum process); she facilitates workshops on womb wellness; and she regularly counsels pregnant women and trans people — many of whom are young and Black — to educate them about homebirth practices and holistic healthcare options. (Franklin’s event details can be found on her Facebook page, “Sumi’s Touch.”)

Franklin is a core member of Malidoma Collective, a group of mostly Black, female artists, creative professionals, and healers who share a central mission of empowering communities of color. The past few months have been busy for her. In May, she and a group of volunteers facilitated the Women’s Healing Clinic, a free event in West Oakland’s DeFremery Park that offered various wellness services — such as acupuncture, reiki, massage, spiritual counseling, and several types of prenatal care — to women and trans folks. A similar healing clinic for youth is already in the works for the fall. Last month, she hosted an intensive training workshop for doulas of color. And in conjunction with the exhibition at Krowswork, she facilitated a workshop that delved into both womb health and the spiritual dimension of sexuality.

Part of Franklin’s objective has been to educate people about the ways in which institutionalized racism affects people of color, especially Black people, even before they leave the womb — which is why she is specifically interested in working with Black families. According to the Centers for Disease Control and Prevention, the infant mortality rate for Black babies is more than twice that of their white counterparts. And recent studies have concluded that Black women are almost three times as likely to die during childbirth as white women — often because of a lack of access to adequate prenatal care.

“Stress causes high blood pressure, which is not productive when you’re pregnant,” Franklin said recently during an interview inside “The Yoni Temple,” referring to the challenges that often plague mothers of color. “Living in food deserts impacts their diet and nutrition, which is important with health outcomes, as well as being overworked at jobs that don’t respect their rights as mothers.”

The training for doulas of color that Franklin hosted in July doubled as a fundraiser for her tuition for midwifery school. This fall, she will relocate to Los Angeles to work as a student midwife under Racha Lawler, a licensed traditional midwife and the clinical director and founder of The Community Birth Center. (She continues to raise tuition funds online at GoFundMe.com/MoreBlackMidwives.)

The Community Birth Center has a staff of primarily women of color, including Lawler, who are dedicated to social justice — something Franklin says is rare to encounter in her profession. In her six years of experience as a doula, she has found that the majority of other doulas and their clients are white. Because of the lack of diverse experiences among doulas and midwives, typical trainings often don’t address questions concerning the communities Franklin strives to serve, such as how to help mothers dealing with substance abuse issues or how to make prenatal care inclusive to queer and trans people.

“I’m very passionate about providing compassionate care [to Black women] by a provider that looks like them and understands their struggle and speaks their language and is also in their community,” Franklin enthused. “It’s not the solution but it’s one of the solutions in reversing those statistics.”

Judging by the large turnouts at Franklin’s workshops, it seems that many others share her perspective. Franklin has found that there are more aspiring doulas of color than she can accommodate in her trainings, so she is currently working on an online curriculum so that she can continue to educate people even while she’s away from the Bay Area for her midwifery studies.

Much of the curriculum for Franklin’s doula training draws from her research about birthing practices from various African and Mesoamerican cultures, as well as the principles of Ayurvedic medicine. She seeks commonalities between various indigenous care-giving practices passed down through generations of women and views traditional medicine as a way for people who have been disenfranchised by the medical-industrial complex — and society at large — to become empowered.

“I think that as oppressed and marginalized people, the most revolutionary thing we can do is heal,” said Franklin. “If we obtain holistic lifestyles, we … allow ourselves to thrive and get to a place where we don’t have to fight anymore because we’re whole.”