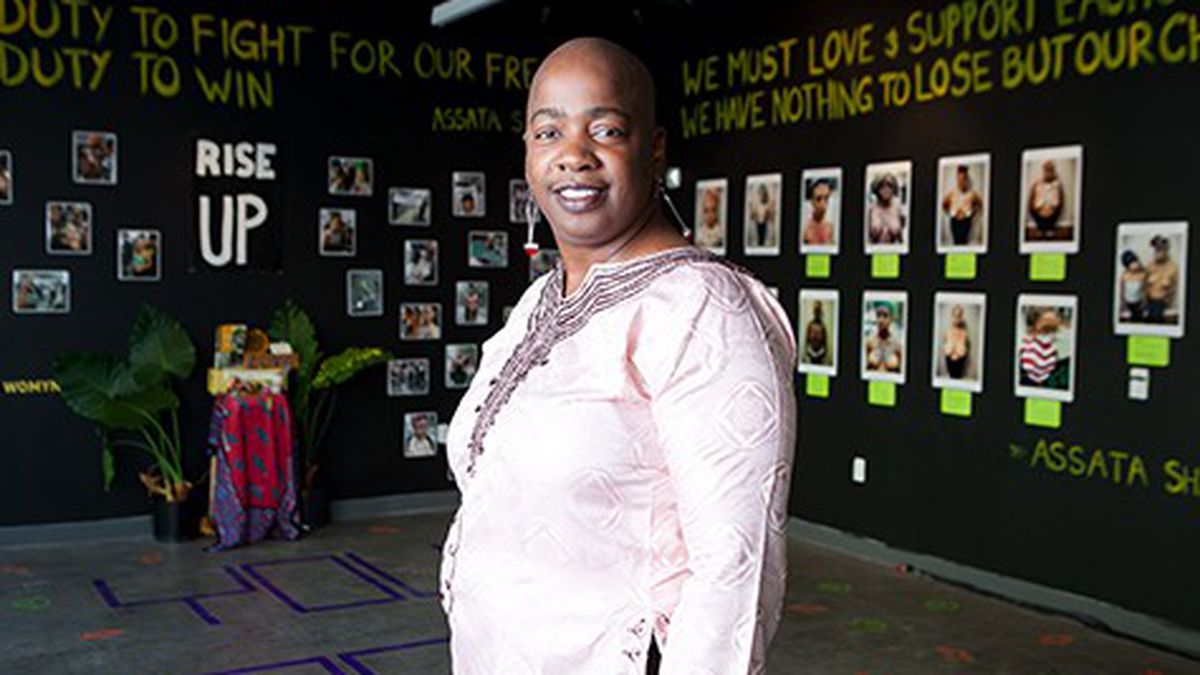 Lessons From The #SayHerName Protest

Oakland Impact Hub's Who Taught You How to Love Yourself? Black Womyn! exhibition, inspired by the #SayHerName protest, marches into Omi Gallery.

In 1992, Nobel Peace Prize winner, environmental activist, and Kenyan feminist Wangari Maathai protested alongside a group of women in Uhuru Park, Nairobi. Confronted with teargas and beatings from the local police, the women — gathered to decry the political incarceration of their sons — stripped naked in defiance. The tactic was effective — the police allegedly fled what they perceived as a curse.

In the Omi Gallery at Impact Hub Oakland (2323 Broadway) an exhibition entitled Who Taught You How to Love Yourself? Black Womyn! highlights a recent political action led by Black women evoking Maathai and a long history of Togolese, South African, Nigerian and many more African women exposing their chests as a form of protest. Specifically, the show is a collection of portraits of Black women baring their chests for the May 2015 #SayHerName protest in the Financial district of San Francisco. Organized by the Black Youth Project 100 (BYP100), the BlackOut Collective, and supported by Black Lives Matter in Oakland, the action called attention to the erasure of Black, queer, and transgender women’s stories from public conversations on the Black Lives Matter movement.

Watching the #SayHerName action unfold on social media back in May, Impact Hub co-founder, gallery director, and chief creative officer, Ashara Ekundayo was ecstatic. “It took me into this kind of whirlwind of research into the tactic of African women baring our breasts in protest, in rage, in lament, in sorrow,” she said in a recent interview. Ekundayo contacted documentary filmmaker April Martin, who was asked to photograph the protest by its organizers, and asked if she would agree to have her first photography exhibition. Now, her photos are on view in Who Taught You How to Love Yourself? alongside portraits created by artist Oree Originol of Black women who were killed by the police.

In a recent interview, Martin spoke candidly about the fear she experienced accompanying protesters on May 21. “My sisters were willing to go topless,” said Martin. “I was terrified for them — you never know how the police are going to react.” Despite chilly weather, the activists stayed put for hours, chanting “Who taught you how to love yourself from the crown of your head to the soles of your feet? Black womyn!” The exhibition at Omi elaborates on that expression of power with an altar devoted to the divine femininity of Black women. “Black folks are magical,” said Martin. “We are the ones that we have been waiting for.”

The naturally lit Omi gallery serves as a serene backdrop for the defiance and vulnerability depicted in the exhibition portraits. Pedestrians walking past on Broadway frequently turn to peer through the glass at the images lined up against the dark walls. “Because it’s the first time we’ve had so-called ‘nudity’ in the gallery, it’s been very interesting for some of our members and corporate clients who work in the space to be confronted with this kind of message, and this imagery of Black women and our bodies,” said Ekundayo.

Ekundayo plans to draw as much attention and activity to the show as possible. This Thursday, August 6, as part of a series of events under the name “Conjure Circle,” a procession from Broadway and Grand Avenue to the gallery will commence the official Opening Night Ceremony of Martin and Originol’s exhibition (although the show has been up for viewing since July 3). Participants are encouraged to bring drums and banners. Once at Impact Hub, dinner, performance art, music, and conversation will take place from 7 p.m. to 10 p.m. The following evening, there will be a First Friday reception, featuring a performance by AfroFonix and special guests.

The events will celebrate the lives of Black women, issuing a radical call for inclusivity. “I think it’s very important that we continue to remind people that this particular movement [Black Lives Matter] was spurred, is nourished and nurtured by women, by transfolks, and by queer folks,” said Ekundayo.

Above Martin and Originol’s work, political exile Assata Shakur’s defiant words are emblazoned on the gallery wall, issuing a loud, memorable cry: “It is our duty to fight for our freedom. It is our duty to win.”

Correction: The original version of this article stated that The Black Sheros and Bones of a Feather would be performing at Omi Gallery on Friday, Aug. 7. Due to a scheduling change, the performer will actually be AfroFonix.
Facebook
Twitter
Linkedin