.Sucking Up Every Bit of Marrow 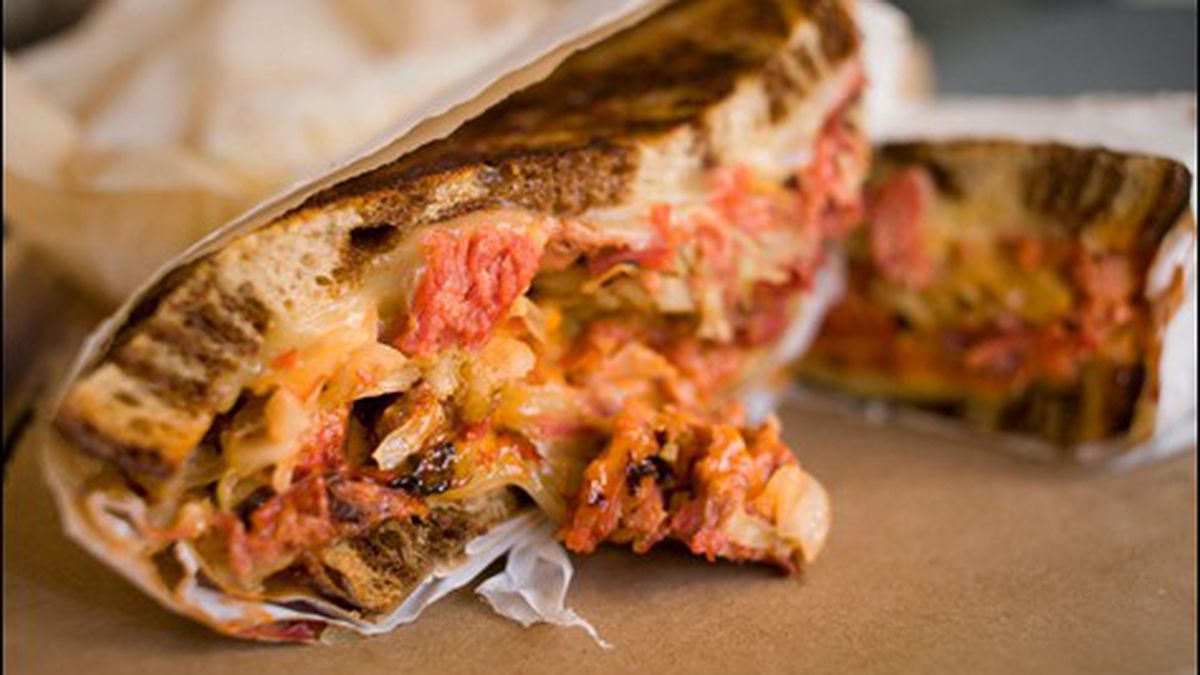 At Marrow, the latest meat-centric sandwich shop to open in Oakland, there’s a big stack of books on the counter about nose-to-tail eating and the finer points of how to butcher a cow — volumes whose titles read like some incantation or a recipe for witch’s brew: Odd Bits. Fat. Bone. The dominant decor feature is a handwritten account of the restaurant’s sourcing philosophy, so you can read about the animals’ lineage and their lifestyle — the fact, for instance, that the Devil’s Gulch Ranch piglets stay with their mothers until they’re weaned, after which point they enjoy a diet of whole milk, whole-grain bread, and tortillas; or that the J Brand cattle procreate naturally, in the manner that God intended.

Practitioners of whole-animal cookery believe that if humans are going to kill animals for their meat, it’s only right to use up every last “odd bit,” to let no part go to waste. Marrow’s owner, Jon Kosorek, isn’t the first chef to adopt this philosophy. But he might be the first (in Oakland anyway) to open a restaurant promising that every piece of meat — every soup bone and scrap of bacon — will come from a whole animal, dismantled on-site. And I don’t know anyone else who’s doing this in a tiny shoebox of a sandwich shop with barely a dozen seats and just enough room in back for Kosorek to break a cow down into all its delicious component parts.

Kosorek was the proprietor of Jon’s Street Eats, one of the first new-school gourmet food trucks to launch in the Bay Area. He sold the truck in 2011, and, after a stint in wine country, came back to Oakland wanting to open a restaurant with a simple menu, but with whole animals as the foundation: “I got kind of sick of seeing boxes of parts,” Kosorek said.

Jon’s Street Eats was popular because Kosorek served fancy, restaurant-quality food made with integrity but packaged in a familiar format: a cheesesteak, a breakfast sandwich, a bag of fries. He hasn’t changed his approach at Marrow.

So one morning I ordered a grilled pork terrine, for which Kosorek braises a pig’s head and hocks and picks off all the meat (jowl, tongue, ears, cheeks) before pressing it into a mold. Technically, it was a headcheese, but if he called it that, people might be less inclined to buy it, which would be a shame. Spooned over grilled toast, along with a 64-degree egg (the yolk creamy and just barely runny), it was one of the best breakfasts I’d eaten in months.

The whole-animal ethos dictates the entire menu. It’s why a corned beef Reuben is one of the restaurant’s staples: The corning process keeps the meat shelf-stable long enough to be served up, one sandwich at a time. It’s why Kosorek dry-ages steaks and stuffs sausages — why he practices the obscure and wholesome arts of curing and preservation. And it’s why, aside from a handful of recurring standards, everything on the menu rotates depending on what animal Kosorek is focused on, and which cuts he needs to use up.

Mostly, he serves sandwiches — meaty, meaty sandwiches. The Reuben was gloriously saucy but well balanced. Kosorek, a transplanted New Yorker, makes the dressing and sauerkraut in-house and buys marble rye from a local baker. But the East Coast flavors were pitch-perfect, as was the meat itself: moist, luxurious cubes (not slices), with just a whisper of smoke.

A porchetta special was the best kind of grease bomb, the rendered pork fat soaking all the way through the sandwich’s wax paper wrapping. Kosorek takes the pig’s torso off the bone; rolls it up with fennel, thyme, and assorted spices; slow-roasts the whole thing; then chills it and slices it thin. The texture of the meat — stretchy, fatty, and tender — was divine.

It isn’t surprising that such a temple of meat would serve an outstanding patty melt or exceptionally savory thin-cut beef-fat fries. But what struck me was the delicacy with which Kosorek handles the dishes that are less meat-focused. A King Salmon Cobb salad featured no bacon whatsoever, in spite of its name. Instead, there was subtly smoky roasted salmon and goat cheese — a play on cream cheese and lox — served with asparagus, roasted beets, a boiled egg, and thick slices of avocado. All in all, a surprisingly light and vegetable-centered dish. A side of grilled Brentwood corn on the cob was a nice play on Mexican elote, topped with grated Grana Padano and chili flakes for an explosion of flavors — spicy, savory, and sweet. And Kosorek’s take on potato salad was an inspired combination of crispy fingerlings, arugula, and a preserved-lemon dressing.

Of course, there’s a cost associated with eating sustainably raised animals. While many items are reasonably priced — a refreshing seasonal agua fresca for $2; the aforementioned pork terrine breakfast plate for $5 — a sandwich, side, and drink at Marrow will cost nearly twenty bucks — probably more than what some might be willing to spend on a grab-and-go lunch. Is it worth it?

If you’re mainly interested in the food, it is. The whole-animal philosophy appealed to my conscience, and the big hunks of meat satiated my hedonistic id. Mostly, I was impressed by the kitchen’s restraint: Nothing was overly salted or spiced, and the cooking methods tended toward the simple and the old-school. It’s not health food, certainly, but you get a sense that the ingredients are treated with respect.

There was perhaps no better illustration of this than Kosorek’s roasted marrow bones — an occasional special and, of course, the restaurant’s namesake. The preparation — bones roasted in an oven — couldn’t be simpler, and there was little adornment beyond a bit of salsa verde and a spoonful of sea salt for sprinkling. But I’d be hard-pressed to think of a more decadent dish. I scraped out the quivering pink and brown bits and spread them on toast, and when that was gone, I did what Thoreau advised: I picked up the bones and sucked out every last drop.