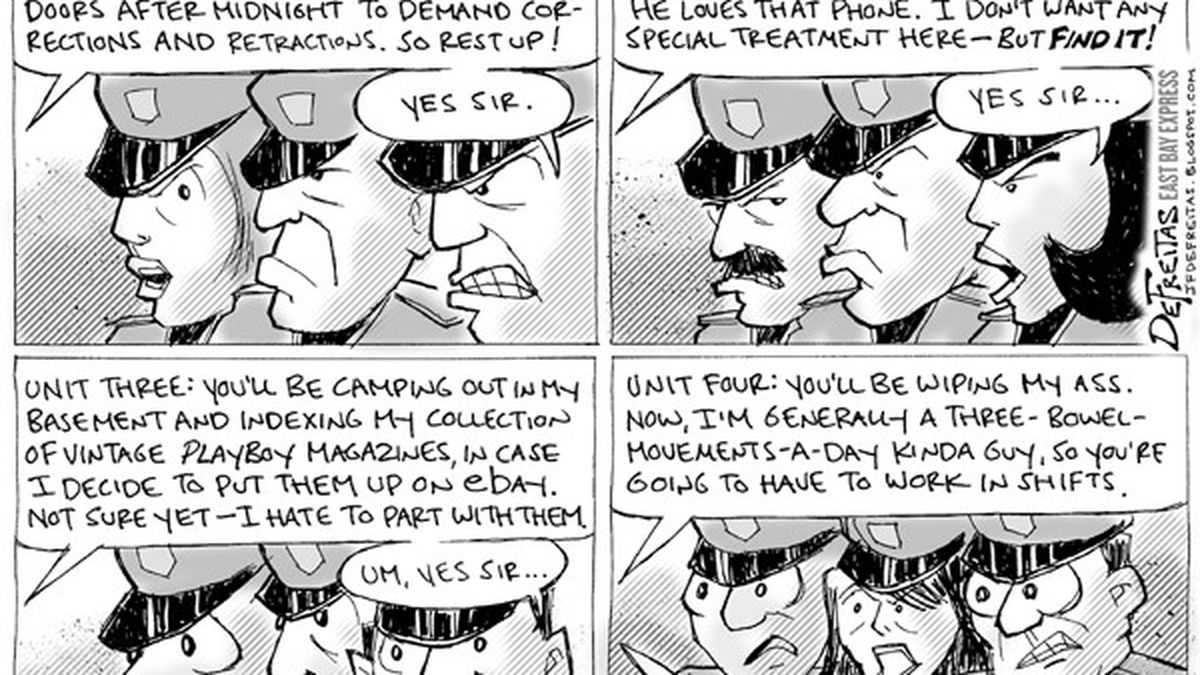 Berkeley's top cop takes another misstep. Plus, the Warriors aren't gone yet, and Oakland has a balanced budget.

At the beginning of this year, it looked as if the decision in 2009 by Berkeley leaders to hire Seattle police Captain Michael Meehan as the city’s new police chief was a smart move. Meehan was successfully reforming Berkeley’s police department, implementing a zero-tolerance policy for police misconduct while slashing costly police overtime. And his get-tough stances with the city’s police union represented a refreshing break from the past. But in the past few months, the hiring of Meehan has started to look more like a mistake, as he ensnared himself unnecessarily in two mini-scandals that raise serious questions about his judgment and his priorities as Berkeley’s top cop.

Meehan’s troubles began when he dispatched police spokeswoman Mary Kusmiss to pay a late-night visit to the home of Oakland Tribune reporter Doug Oakley to demand a correction to an incorrect story that had been posted to the newspaper’s website. It was a dumb move. Although Meehan had every right to want the story corrected, he should have waited until the next business day. He later admitted as much and apologized for his actions, although questions remained as to whether the chief improperly used police resources to find Oakley’s home address.

Interim City Manager Christine Daniel — Meehan’s boss — hired an outside law firm to investigate the chief’s actions, but it appears that the inquiry uncovered no serious misconduct, because Meehan seems to have received no major reprimand. Daniel told the website Berkeleyside last week that the probe cost the city $15,000, and that “appropriate action” had already been taken against the chief.

Then came the news that earlier this year Berkeley police had dispatched ten cops to search for Meehan’s son’s stolen iPhone. The move represented another waste of city resources, and smacked of special treatment for the chief. Meehan later insisted that the sergeant in command made the decision to send the officers after the phone, not him, and that such moves were relatively routine.

But that seems like a pretty weak response from the chief. First, the sergeant-in-charge had to be influenced by the fact that the stolen phone belonged to his boss’ son. Second, if Berkeley police really do regularly dispatch ten cops, including some on overtime, to search for stolen phones that have tracking software, then the department’s priorities are screwed up.

As such, we view the iPhone incident as a second strike against Meehan. In fact, if it weren’t for the fact that he’s done a good job overall as police chief, particularly by standing up to the police union, we might be inclined to say that it’s time for Berkeley to get a new chief. But we’re not quite ready do say that — at least not yet.

The Warriors Aren’t Gone Yet

The very public announcement last week by the owners of the Golden State Warriors that they plan to move the team to a new arena in San Francisco represented a significant blow for Oakland’s plans to build Coliseum City in East Oakland. Without the Warriors, the proposed sports, entertainment, retail, and housing complex will lack a major tenant that would bring 20,000 fans to the area at least forty times a year. However, as bleak as things look for Oakland basketball fans right now, the city should not give up hope on Coliseum City. It still represents Oakland’s best chance for keeping the A’s and the Raiders in town. Plus, the Warriors’ planned move to San Francisco is by no means a done deal, especially when considering the typically contentious nature of major development projects in that city.

Just ask Larry Ellison. The plans by the Oracle founder for a major development on San Francisco’s waterfront were on the very same site — Piers 30-32 — now being eyed by Warriors’ owners Joe Lacob and Peter Guber. But Ellison’s plans belly-flopped earlier this year after facing much opposition in the city. And the San Francisco Chronicle reported last weekend that support for the Warriors’ plan on the San Francisco Board of Supervisors appears to be tepid, and that some supervisors intend to demand substantial concessions from the team.

It’s also worth noting how rapidly things can change in the world of sports — and that no city knows that better than Oakland. The Raiders, for example, abandoned the city once before, and were previously involved in a nasty lawsuit with the city and Alameda County for many years. But now, the Raiders are the one professional sports team that actually wants to stay here.

In other words, Oakland would be smart to forge ahead with Coliseum City, particularly since the A’s’ proposed move to San Jose, which once seemed as viable as the Warriors’ plans for San Francisco, now appears to be dead in the water as well.

Listening to the critics of Mayor Jean Quan, one might think that Oakland is on the brink of financial disaster. In fact, the opposite is true. Last week, amid the panic over the Warriors’ announcement, Quan and City Administrator Deanna Santana unveiled a balanced general fund budget that includes no cuts or layoffs for the first time in four years. In fact, Quan’s 2012-13 budget has enough money to finance a much-needed police academy.

So what’s going on? It turns out that city tax revenues are coming in at a higher clip than anticipated. In addition, previous layoffs and cuts, along with the pivotal concessions that Quan’s administration negotiated with the city’s public-employee unions last year, have eliminated the structural deficit in Oakland’s general fund.

Quan’s administration also appears to have effectively dealt with the elimination of redevelopment by Governor Jerry Brown — at least in terms of the city’s general fund. In fact, the city has plenty of money in reserve should the state decide to nullify some of the redevelopment deals that Oakland made last year.

The one dark spot on the horizon, however, is the city’s old pension plan for cops and firefighters. The old plan, which only applies to some current retirees, has long been a financial burden for the city. And finding a sustainable way to fund it will be one of the biggest challenges that Quan and the city council will face in the next year.