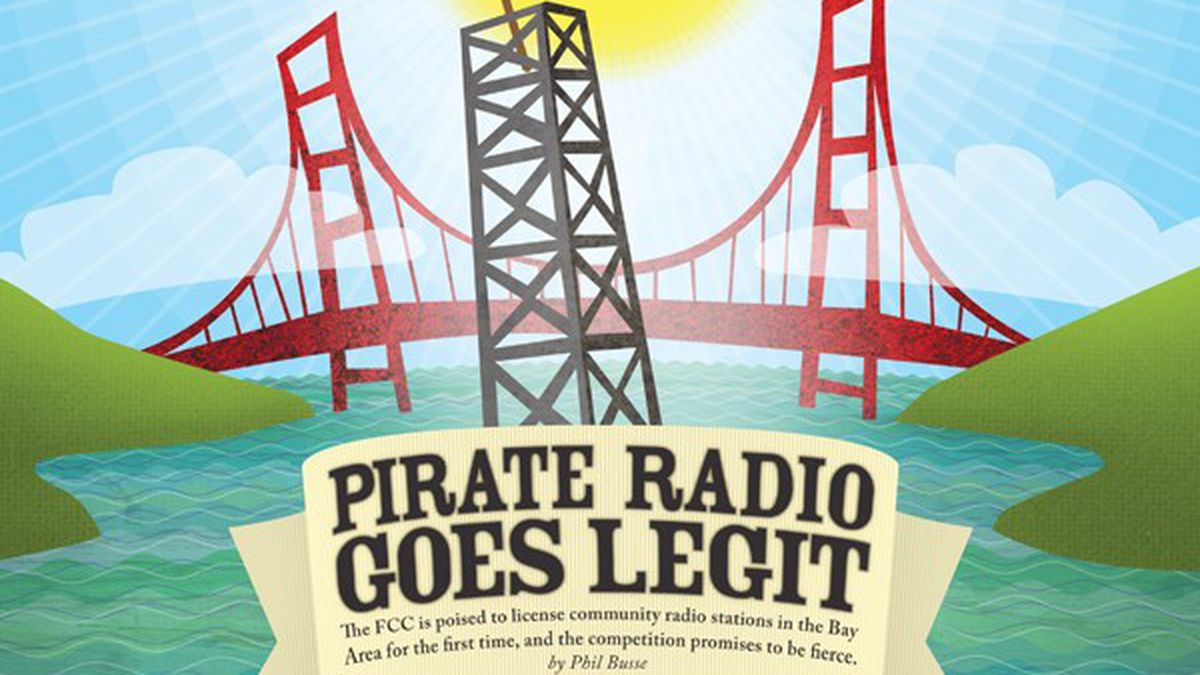 Readers sound off on pirate radio, Tara Flanagan, and our new food critic.

Thank you, Phil Busse and the Express.

Best always and rock on! to Free Radio Berkeley 104.1, in its work locally and around the globe!

Of course, it is a zenith (abyss?) of irony to have deregulated, eliminated, sold-out and sold-off “public interest programming” requirements on behalf of commercial broadcasters, and then attempt to re-balance the dial (YAY!men) with low-powered frequency modulation stations after paving radio paradise the first time ’round.

Several Bay Area LPFM “pirates” have come and gone and come again: The Mission’s Radio Equis, SF Liberation Radio, Pirate Cat — all part of an indomitable urge to free music, information, and inspiration, like so many effulgent community sound gardens (although some hours/DJs/tastes may tip toward the dark, subterranean, funky … fecund, all the same). In SF today one can tune into KKCF 90.9 streaming (CCSF.edu/KKCF), and Radio Valencia 87.9 is swingin’ away at RadioValencia.fm

KECG was created by tech and media teachers, against all kinds of odds and tides. KECG currently features global/local programming, interviews, and student-generated live programs throughout the academic year (weekdays from 10 a.m.- noon) with the support of Contra Costa County Regional Occupational Programs (ROP) and the West Contra Costa Unified School District.

Listeners and readers: Thoughtfully crafted and curated radio can function like a vital organ, to help keep us sonically, psychologically, and metaphysically fit. Take your pick and send one your love, letters, and donations.

I have trouble understanding the characterization of Abel Guillen as the “more progressive” candidate than Rob Bonta. Bonta has been dual-endorsed by many of the same organizations that Guillen claims support from, including the California League of Conservation Voters and SEIU. Bonta has by far the most endorsements from organized labor, and also the most Democratic Club endorsements of any candidate for Assembly District 18. Lastly, Bonta is exclusively endorsed by the United Farm Workers, one of the most progressive endorsements in the race. It seems that Bonta is the more consistent and proven progressive candidate.

Prop 13 Is the Problem

Apart from the genuine need for community college funds, a $48 parcel tax is really unfair to low-income property owners, of which there are many. Let’s take on the big dog, Prop 13, and modify it.

I was quite surprised [to see your endorsement of Andrew Wiener], as I know that my friend and candidate for Superior Court Judge, Tara Flanagan, was not contacted for an endorsement interview by the Express.

First, Tara Flanagan is the most experienced candidate, having served for six years as a temporary judge here in Alameda County, and as an attorney handling criminal, civil, and family law matters. That is one reason why she has such solid support in the legal and judicial community.

Next, I still think that diversity matters. About 30 percent of our county’s judges are women, and I am the only out lesbian judge in Alameda County. Tara will bring needed diversity to our bench. That is one reason that groups like Women Lawyers of Alameda County, the National Women’s Political Caucus – Alameda North, Black Women Organized for Political Action, and the Latino Connection PAC have endorsed Tara Flanagan.

Finally, when you endorsed me two years ago (May 26, 2010), you wrote that “[w]e think it’s time that a county judge reflect the progressive views of most voters.” I believe that is still important today. That is why I was joined by the Democratic Party, the Green Party, the Sierra Club, SEIU Local 1021, AFSCME Local Council 57, and dozens of progressive leaders in endorsing the most experienced and qualified candidate, Tara Flanagan.

As a point of clarification: We did not conduct endorsement interviews with any candidate for office in the June 5 election.

Full disclosure: I’ve been smoking cigarettes for over thirty years. That being said, I’d planned on voting yes on 29 until reading it and seeing that only 20 percent of funds raised would go toward cessation and prevention, and 60 percent toward more cancer research. It’s well-known that smoking causes cancer. We need more help quitting, and this tax, as written, doesn’t do nearly enough.

I HAVE TO EAT HERE.

Thanks for being so awesome/open-minded about all kinds of food; I really look forward to hearing about the next great veg find! Plus you’re so fun to read, love your reviews! Luke for president! (I think those are the qualifications you need to become president.)

I love Luke Tsai’s reviews! I live in and love downtown Oakland. I’ve been here almost ten years, and it gets better all the time, in spite of the Occupy-related problems. I work in the City, but spend as much of my money in my town, Oaktown, and encourage all my fellow Oaklanders to do the same.

“The Anti-Bullying Movement Misses the Mark,” Raising the Bar, 5/2

I think you are on to something here. If American capitalism has morphed into a zero-sum game where Americans think only the strongest will survive and there is no regard for our collective well-being, how else can we expect kids to behave?

We failed to credit the photographer whose work appeared alongside our May 16 music story, “Can’t Stop, Won’t Stop, Chippy Nonstop.” It’s Arturo Torres.

In our May 23 Legalization Nation column, we mistakenly referred to Congressman Dana Rohrabacher as a Democrat. He’s a Republican.

Islands in the Steam

Alternative to Governor’s Giant Water Tunnels Plan Would Be $6 Billion...