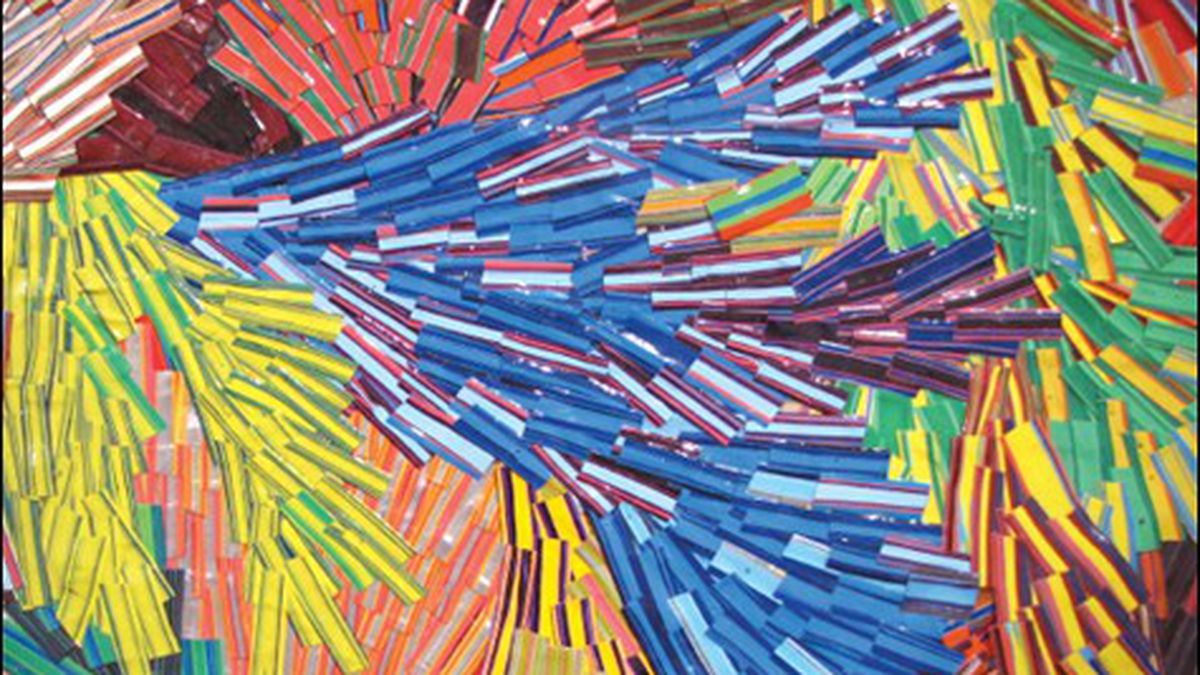 Stratigraphy is the branch of geology that focuses on rock and soil strata. It’s a discipline we’re all reminded of occasionally, when windows and nerves get rattled by twitchy tectonic plates. Within the context of Stratigraphic, which premiered at Gordon Huether‘s Hay Barn Gallery in Napa in September, the word takes on gentler meanings, invoking, according to the gallery’s press release, “hidden strata, stories untold, passages of time, and fleeting moments.” The five artists featured — Macyn Bolt, Brian Caraway, Omar Chacón, Jr., Danielle Mysliwiec, and David Allan Peters — apply paint in unorthodox ways, i.e., with unusual tools like grout and pastry guns or clay extruders, in laborious sedimentary stages, creating abstract images influenced as much by the physical properties of the oil or acrylic paint (either squeezed straight from the tube or enhanced with gels or other additives) as by preconceived ideas. These paintings, insistently physical and overtly time-intensive, are slow collaborations between maker and material.

Within those broad parameters, however, lies a great deal of variation. Bolt’s “Red Pivot,” “Red Pivot II,” “Interlude (A) and (B),” and “Interlude (C), (D), and (E)” are acrylic abstractions in red or black and gray that look monochromatic, revealing only on closer inspection their subtle variations in hue and finish; they’re Minimalist pieces that require contemplation. Caraway’s striped abstractions, “Take My Advice Don’t Come Any Closer” and “I Am Not Afraid,” revisit the geometric abstraction of the Sixties, with the latter incorporating modern vinyl stick-ons, perhaps a dig at the formalist pretentiousness that now seems antediluvian. Chacón makes what might be termed baroque abstractions, covering his canvases with labyrinths of stripes or effusive sprays of extruded/collaged Technicolor paint (“Untitled,” “Variation 1 of 4 Made in Colombia,” “LA ENEA CCXVIII”). Mysliwiec works with any color as long it’s black, to quote Henry Ford; “Breach,” Moat,” and “Anchor” are composed of innumerable strands of oil paint that have been seemingly “woven” into pointed medallion forms that are actually derived from the plans of Renaissance star forts with their projecting bastions. Peters’ untitled laminated/carved acrylics on panel, with their smooth white plains interrupted by craters and trenches of exposed color strata, suggest geological forces in action or abeyance. A piece covered with countless millefiori or peacock-feather eyes is a knockout. Stratigraphic runs through November 19 at Chandra Cerrito Contemporary (480 23rd St., Oakland). 415-577-7537 or ChandraCerritoContemporary.com