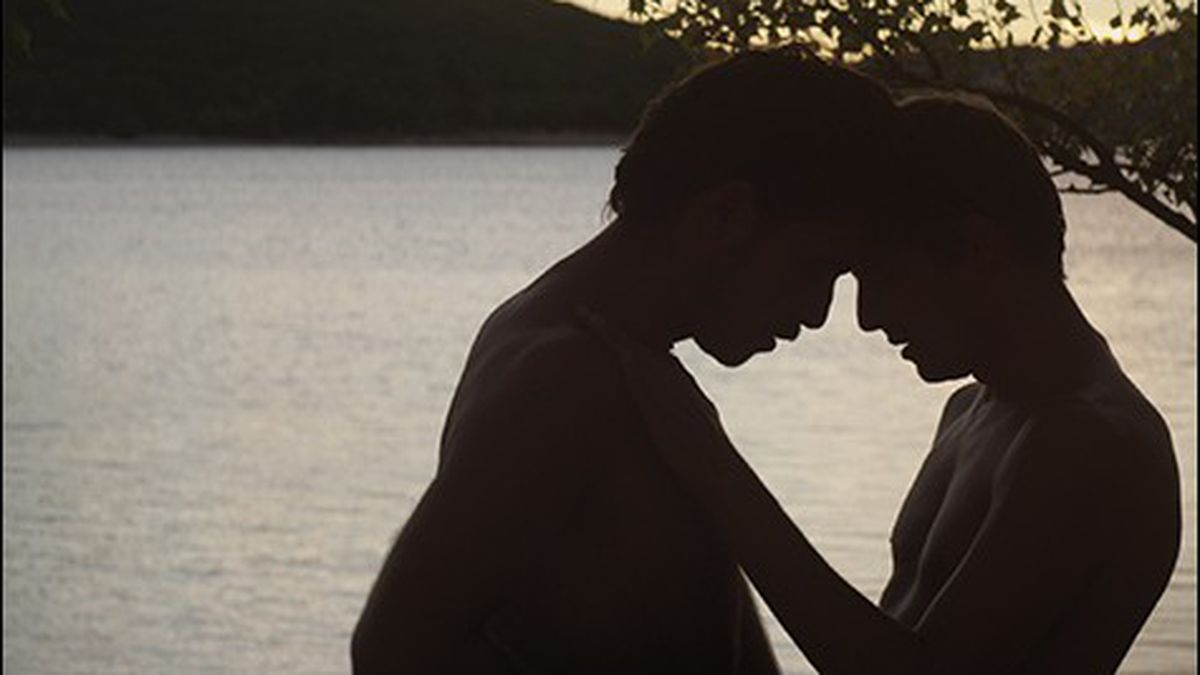 Stranger by the Lake

It’s the hush that gets to us first in Stranger by the Lake, before there’s even a word of dialogue. That eerie silence is accentuated by the establishing shot, an overhead long view of the lonely dirt parking lot near the lake, somewhere in the dry hills of Southeastern France. Local gay men, including Franck (Pierre Deladonchamps), use the secluded lake and its beach as a nude sunbathing/cruising spot, and it is there that Franck becomes fascinated with Michel (Christophe Paou).

Dark-haired, mustachioed Michel doesn’t immediately respond to the boyish Franck, so Franck moves down the beach and strikes up a conversation with an overweight middle-aged man named Henri (Patrick d’Assumçao), sitting alone and observing the scene. In the days that follow, the two rejects become friends and share confidences — the longest exchanges of dialogue in writer-director Alain Guiraudie’s screenplay. But Franck nevertheless remains fixated on the slightly menacing Michel, even after witnessing something one evening in the early twilight. Spoiler alert: We don’t want to ruin any plot surprises, so we’ll just say that Franck realizes early on that Michel is dangerous but pursues their risky, quickie-in-the-bushes relationship anyway. Because love is blind, or because horniness trumps self-preservation, or whatever — choose your own bromide.

Filmmaker Guiraudie tells the story of Franck and Michel in a stylized, formalist manner. The action occurs over ten days, each labeled day opening with a shot of the parking lot. From the publicity material we learn that the hard-core sex scenes were shot with body doubles, but the lake’s other habitués — the exhibitionist masturbator, Franck’s other partners, et al — are depicted so matter-of-factly that it sometimes seems as if we’re watching a documentary. The two male leads (there are no women in the film) play their parts with a convincing lack of affect, to go along with the rest of the distancing effects. There is absolutely no music of any kind, only the mournful sound of the wind whistling through the pine trees. Things happen without music cues or inserts, suddenly and without warning, as if the film were made clandestinely by an eyewitness to a crime.

The two principals, Deladonchamps and Paou, do a lot of acting beneath their facades. Franck is torn between taking it easy with the beach regulars and willingly flinging himself into the path of danger. In this movie no one other than the outcast Henri shares any soul-searching with another character, but we’re led to believe that Franck arrives at his decisions after some study. Michel, on the other hand, gives the impression of a predator. He wears the hard expression of a hunter and seemingly acts on instinct.

Stranger by the Lake is a chilly piece of work that may challenge audiences to pay attention. All we can say that is if they stick with it, Guiraudie’s mannered study of a world often hidden from the mainstream will reward film fans who have admired Claude Chabrol, François Ozon, Dominik Moll, Erick Zonca, and the many screen adaptations of Patricia Highsmith. The classically minded may also catch a whiff of Michelangelo Antonioni, particularly Blow-Up. It has the same ultra-cool examination of motive and rationale, the same cat-and-mouse mental games, the eternal dilemma of truth or consequences. We almost always have to go to France to find that tone, but in this case it’s well worth the trip.

Outside Lands to Be Fitter, Happier, and More Productive