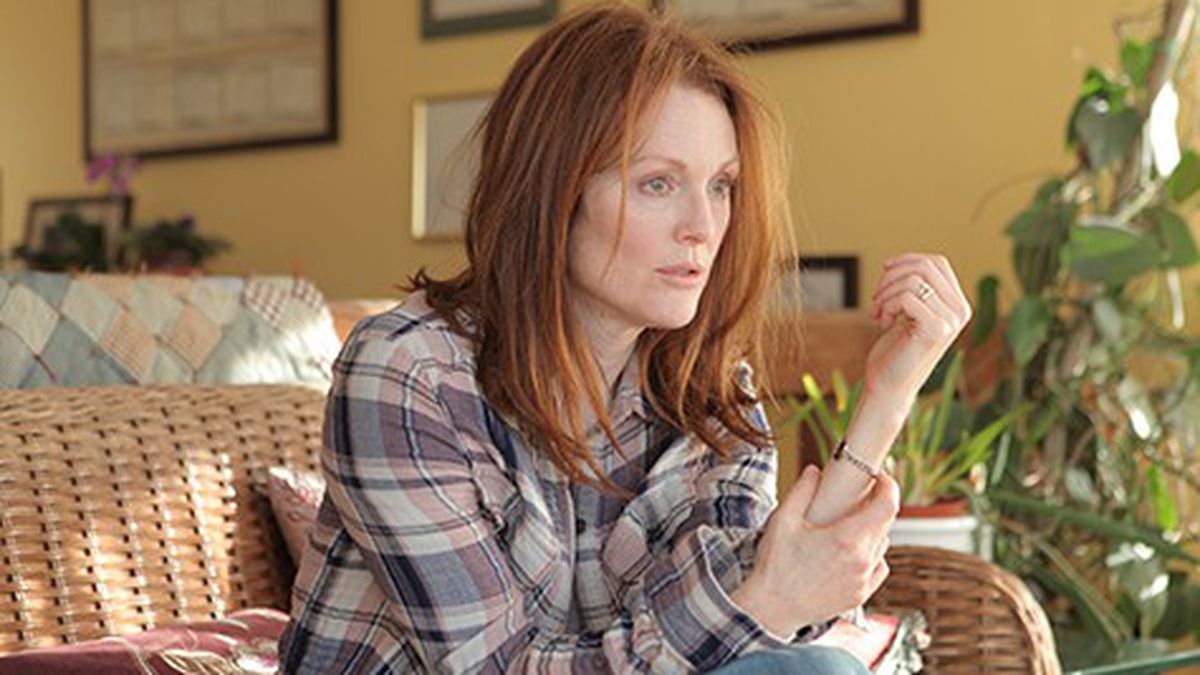 A reviewer’s confession: Some of us have never cared much for movies built around a character’s illness, particularly terminal illness. The overwhelming majority of such movies can’t help being maudlin; it’s their reason for being. And even when they touch our emotions (as they were meant to), we tend to recoil from them because it all seems so cheap and manipulative, so patently dishonest. Movies about slowly dying characters almost never leave us feeling ennobled or uplifted — they make us feel like suckers.

That said, there are degrees of such entertainment. In 2006, writer-director Sarah Polley made Away from Her, in which a character played by Julie Christie develops Alzheimer’s disease and slowly wastes away before our eyes, but not before she mentally closes out her husband and falls in “dementia love” with a fellow patient at a care facility. Christie’s performance was truly heartbreaking, but we got over it.

Now there’s another sensitive Alzheimer’s character study, Still Alice, featuring another fine actress (Julianne Moore) going through a similar but different set of plot variations on themes of love, mindfulness, relationships, and loss of all of the above. And despite our wariness, it too washes over us like a wave and carries us to another place. In the case of actress Moore and the writing-directing team of Richard Glatzer and Wash Westmoreland (adapting Lisa Genova’s novel), that place is Awardsville, as in the Golden Globe given to Moore on January 11 for her performance as Dr. Alice Howland. So it’s established that what makes us break out in hives causes other people to bestow extravagant praise.

At first, Alice has trouble with forgetting things. After a few blown appointments and the realization that it’s affecting her career as a linguistics professor as well as her relationship with her medical-researcher husband (Alec Baldwin) and their three children, she consults a neurologist and gets a PET scan — the diagnosis is Early-Onset Alzheimer’s. Panic. At one point as she slips slowly, from scene to scene, into that netherworld, Alice creates a video message for her “future self,” detailing how to take a suicidal dose of pills she’s put aside in a drawer. When the time comes, she can’t even remember the necessary steps from one moment to the next. The situation gets worse from there.

Moore is a terrifically vivacious performer, with a filmography full of magnetic scenes in such films as The Kids Are All Right, Savage Grace (as Eddie Redmayne’s mother), Todd Haynes’ Far from Heaven, Boogie Nights, and The Big Lebowski. Her portrayal of Alice Howland — from full, engaged awareness to non compos mentis — is truly one of the finest acting jobs of 2014. She etches the gradations of Alice’s suffering in our mind indelibly, poignantly. But it’s entirely likely that Moore’s performance itself will be highlighted as a remarkable characterization, and that the rest of Still Alice — alongside such pathetic films as Away from Her and Michael Haneke’s Amour — will be quickly forgotten.