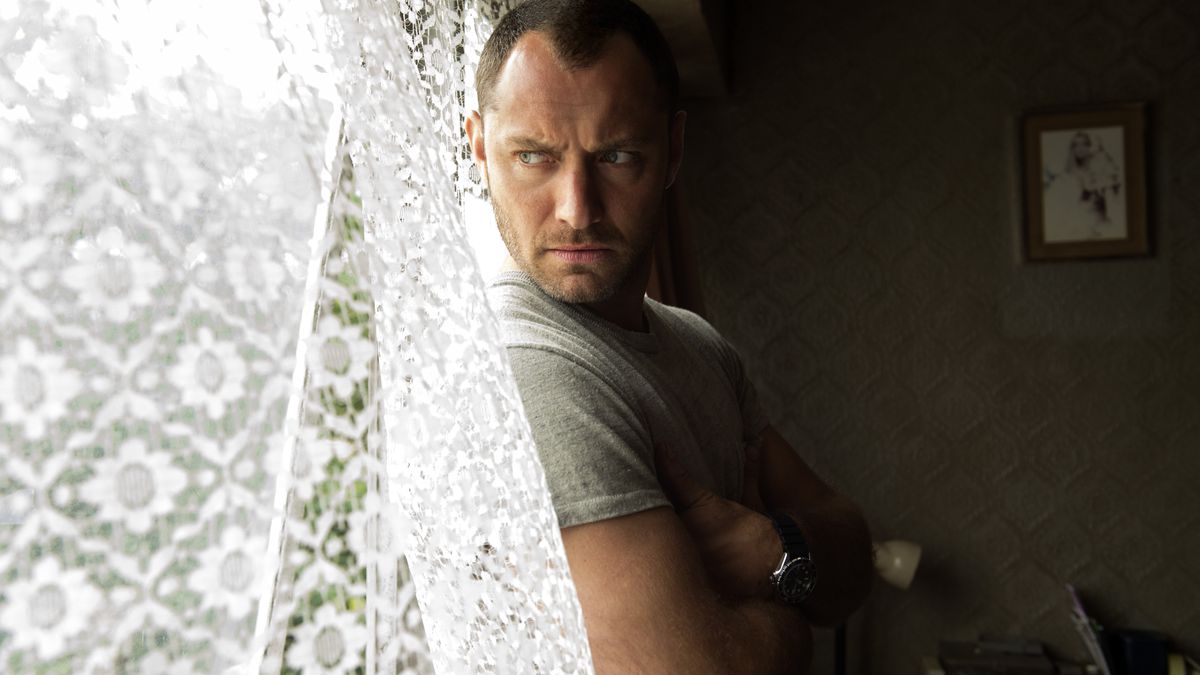 Here’s the pitch: Treasure hunter Jude Law on board a ramshackle Russian war-surplus submarine with a crew of thugs, trying to salvage $482 million in Nazi gold bullion from a WWII U-boat sunk at the bottom of the title body of water in Eastern Europe, all the while dodging the Russian navy. That sounds potentially exciting in outline, but the movie needs to get all the details right, and the crew (and Law as well) has to be particularly nasty. All of that happens, and Black Sea surfaces as a film of ugly beauty, an old-fashioned, sweaty, oily, mechanical (as opposed to electronic) sub adventure full of bursting bulkheads and painful sudden death. It’s the best submarine pic since Das Boot.

Captain Robinson (Law), a burnt-out sea dog who has just gotten the sack from a marine salvage company somewhere in the UK, rebounds with a tip from one of his unsavory sailor friends, over a pint. A German U-boat filled with two tons of gold lies off the coast of Georgia in the Black Sea, still untouched after seventy years. Russia and Georgia both claim it, but while they’re ironing out an agreement Robinson has the chance to set out in a sub from Sevastopol, Crimea, and, operating under the Russian sonar, steal the gold and bring it back to a shadowy group of investors repped by Daniels (Scoot McNairy), an untrustworthy MBA type. Sounds easy enough.

Speaking of untrustworthy, the crew Robinson recruits is half Russian — a gang of burly, tattooed ugly-mugs — and half Brit, mostly Glaswegians, Mancunians, and Liverpudlians, plus an Ozzie screwball named Fraser, played by Ben Mendelsohn. And all skuzzy, all the time. Fraser has a knife he’s continually fondling, a bad sign for a long voyage in a cramped sub packed with foul-tempered men. There’s a seventeen-year-old “virgin” (therefore accident-prone) submariner from Merseyside named Tobin (Bobby Schofield), and a nervous, bearded Russian called Morozov (Grigoriy Dobrygin from A Most Wanted Man). Daniels, the preppy straw boss, ships along as the designated albatross. A well-chosen cast of short-fused ruffians. The stage is set for mishaps.

Director Kevin Macdonald (The Eagle, How I Live Now, The Last King of Scotland), working from an original screenplay by English TV vet Dennis Kelly, paces the action well, allowing a few minutes of breathing room between disasters. The scenes with a squad of divers exploring the long-sealed, tomb-like German sub and then dragging the booty across the muddy sea floor are suspenseful and realistic, with very little obvious CGI. We all know what happens when gold fever sets in — it’s an adventure-movie staple — but that doesn’t mean that Law and his pirates can’t milk the resulting greed and panic for all they’re worth.

This is the middle-aged Jude Law that’s been through the typecasting wringer and is now, in the role of Robinson, fully in command as a hard-boiled foreman with a terminal case of regrets. Black Sea will never be accused of overloading metaphor and subtext on a genre framework. It’s a modest, tightly wound, straightforward story about a dangerous task performed by disposable men under severe conditions. The men are surly before sailing and they only get worse as the water seeps in. Who would want it any other way?