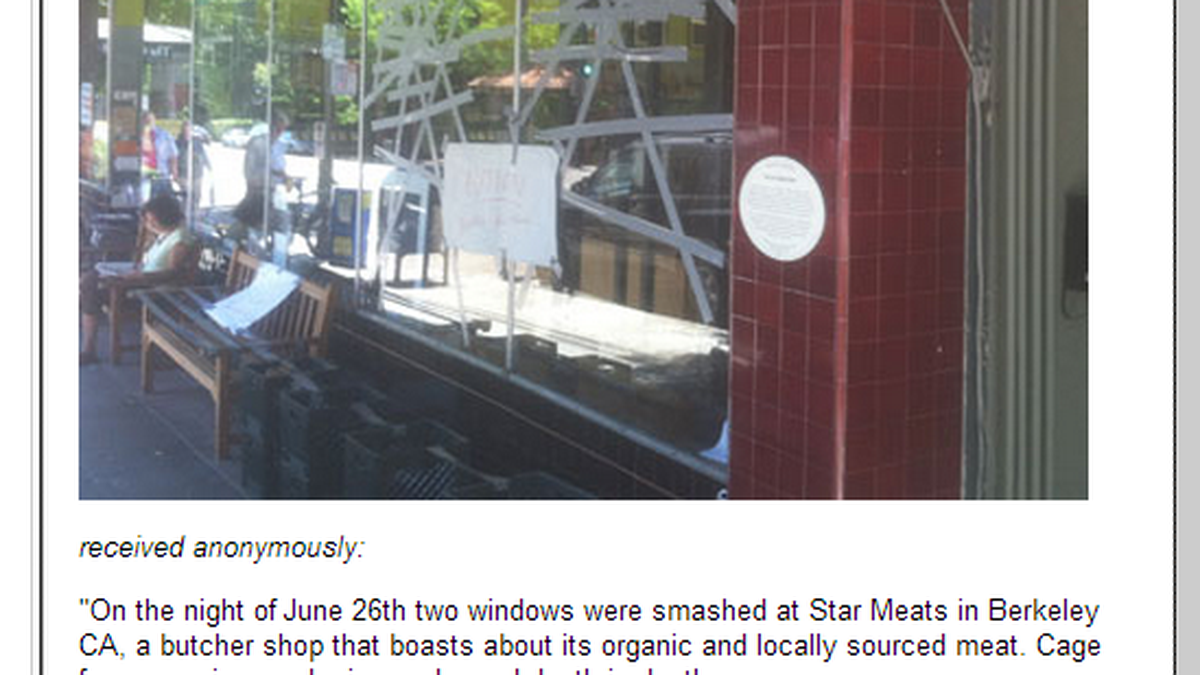 by Sam Levin
Aug 5, 2014
Star Grocery, the longstanding, family-owned Berkeley shop that sells locally sourced meats free of antibiotics and hormones, has allegedly become the target of anonymous animal rights activists. And now, the FBI is getting involved. Folks passing by the Claremont Avenue staple, which is home to butcher shop Star Meats in the back, may have noticed part of the storefront boarded up this past week. That’s because, in the early morning hours of Sunday, July 27, vandals allegedly smashed the windows — possibly as some sort of seriously misguided animal rights protest.

[jump] No owners or managers were available at the grocery store or butcher shop when I called this afternoon — after Berkeleyside posted about it on Facebook — but Star Meats employee Rafiq Scott told me the vandals left “two pretty big holes through the window,” after  throwing rocks at the business in the middle of a night. (Activists smashing the windows of independent, local businesses is apparently becoming a popular trend in the East Bay).

At first, the grocery store didn’t know why it had been hit, but FBI officials told the owners that it might be the act of an animal rights activist, according to Scott. “We thought it was just kids throwing rocks. No one had any clue why this happened.”

Fueling the speculation that animal rights activitsts were involved is this bizarre post from a Florida-based website called Bite Back, which apparently promotes “animal liberation“:
That site appears to collect these kinds of stories from around the globe, and the tipster is clearly familiar with the East Bay — referencing similar past incidents at Wayland’s Meat Market in Oakland an East Oakland Burger King.

It’s not exactly clear how the FBI got involved, though Berkeleyside reported that the FBI has been monitoring the Bite Back website. (An FBI representative did not return my call this afternoon, and a Berkeley Police Department spokesperson told me that it did not receive a call about the incident).

Regardless of who is responsible, the attack on a small, family-owned business, took people by surprise. “People feel like it’s a really pointless act of vandalism,” Scott said.