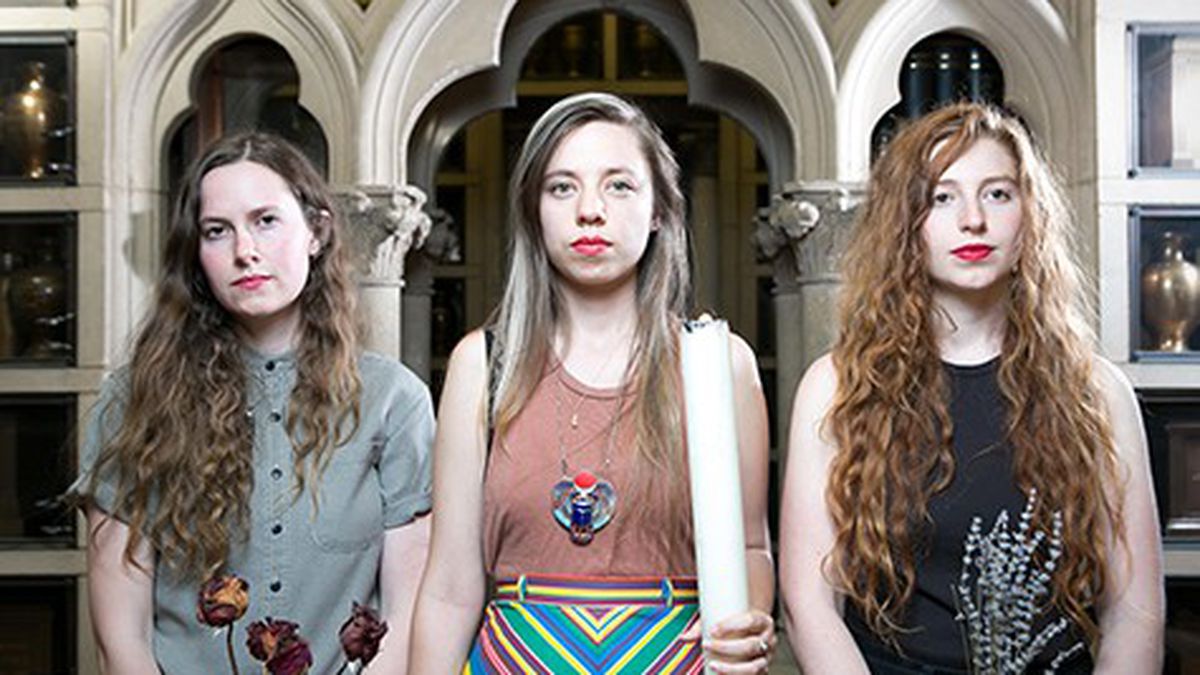 The weekend-long festival will highlight artworks that merge mysticism and new age aesthetics.

Above an illustration of an all-seeing eye, the poster for the HÄXÄN Film Festival reads: “The consecration of your personal occult through film.” To the young HÄXÄN organizers — Courtney Fellion, Hannah Schulman, and Phaedra Restad — the phrase “personal occult” is the crux of how the festival is curated, and it has a specific yet malleable definition. The personal occult is the particular way in which a person applies paranormal practices to his or her life and work, whether that’s through full-blown ritual or merely an aesthetic nod to the supernatural. Thus, the works that will be shown at the second annual HÄXÄN festival in Oakland this weekend won’t be recycled movie tropes about magic. Rather, they will represent sincere, contemporary forms of hybrid occultism that “present the kitsch of New Age pop culture alongside ancient sacred and mythological practice,” as the HÄXÄN mission states.

Over the last few years, there has been a steady rise in references to mysticism in popular culture. While witches have always been a cinematic stereotype, a more sincere belief in the secular existence of a supernatural beyond has been gaining serious momentum — manifested in Tarot card collections, ritual-based performances, and the adoption of an everyday occult aesthetic through clothing. Oakland residents Fellion, Schulman, and Restad — who are all interested in both experimental film and occult practices — noticed that a mystic subculture that has long existed in the Bay Area was garnering interest from newcomers. “We could see an inkling of this new iteration of the occult in art and this younger generation of artists [who] were making occult-themed art,” said Restad in a recent interview. So, the trio decided to start the HÄXÄN Film Festival last year to build a platform for those people to show work, and the response was even more enthusiastic than they had anticipated.

This year, the festival will take place over the span of three days and will include much more than film. It will kick off on Thursday, August 27, at EM Wolfman Small Interest Bookstore (410 13th St., Oakland) with a “ritual blessing” that will include short talks by Wundercabinet, a curated slideshow performance of Vernacular Visions by Justin Clifford Rhody, and a preview of films from the festival (7–9 p.m.). On Friday, an hour and a half of films will be shown at Club Vinyl (420 14th St., Oakland) and otherworldly local musicians Beast Nest and Gossimer will perform (7 p.m.–2 a.m.). The evening will end with a costume Crystal Ball Dance Party. Saturday will be the “HÄXÄN Festival Final Ascension” at the Omni Commons (4799 Shattuck Ave., Oakland) with more film screenings, live performances, and art installations, plus a coven of vendors from the Tarot Woman to Spinning Wheel Apothecary (5:30–10:00 p.m.). While the first HÄXÄN festival attempted to pack all the films into one night, this year will bring in more interdisciplinary work and create a more laid-back vibe, where newcomers to experimental film won’t feel overwhelmed.

Experimental film and occult practices easily intersect, as experimental filmmakers often manipulate found archival footage in a way that seems to conjure enchanted realities. But this year, HÄXÄN also has a lot of submissions that represent a “post-internet” aesthetic — what the curators called “techno-occultism” — that imbues influences of new media and virtual experience. “I think that’s really apt because a lot of the New Age material and the art that was being made in the Sixties and before are more accessible than they ever were on the internet,” said Restad. “And people are drawing on those resources, and it’s inspiring a whole new generation of artists and resonating with a lot of people.”

Fellion added that new media technology may be the reason why more people are being drawn to occult practices these days. As technology becomes increasingly capable and we understand less about how it works, it begins to represent a new kind of magic. Fellion pointed out that the device being used to stream film clips in the “Occult Archive” that they have on view at EM Wolfman is called a “Video Caster.” “Even the language of this technology is in itself talking about the magic of technology and the experience that we’re reaching at that we can’t quite grasp,” said Fellion.

At the same time, technology is also prompting people to want to get back to something elemental — to connect with the earth — which can, paradoxically, be accommodated by occult practices as well. “They’re somehow both going on and they’re not in contest with each other,” said Restad. “They’re harmonizing in a really cool way in a lot of the films.”

This year, one of the installations on view will be a “New Age gospel corporate ritual” videogame by local game designer Porpentine Charity Heartscape and Brenda Neotenomie. Another, by Sarah Brady, will use mirrors, projectors, and motion sensors to create an immersive, prophetic experience. Natalie Tsui, on the other hand, will be screening one of her horoscope films in which she illustrates the fortune of a particular sign through found, archival footage. There are over forty participating artists, and approximately half of them live in Oakland.

The festival name is a loose reference to a 1922 documentary about witchcraft that’s both a well-researched piece of journalism and a fantastical, fictional tribute to the occult. The HÄXÄN Film Festival hopes to straddle those two worlds as well. “We’re just interested in that ambivalence of being both interested in authenticity but also performance and fantasy and play,” said Fellion.