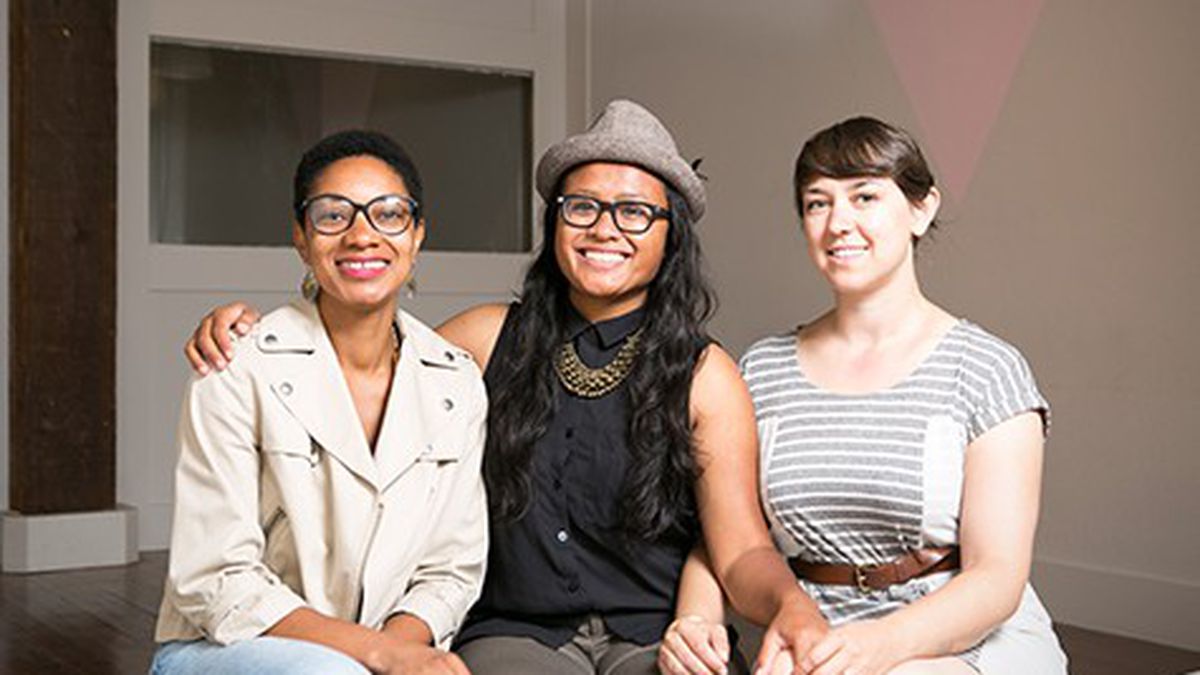 As the city rapidly develops, a new collective is staking claim for LGBT people with a highly visible center aimed at promoting queer art, retail, and community-building.

At Show and Tell, a boutique and art gallery on Broadway and 14th Street in downtown Oakland, customers and friends of co-owner Alyah Baker will sometimes stop by and ask if they can sit and work on their laptops. The small commercial space is not set up for laptop work, but Baker doesn’t turn people away; she wants her business to feel like a welcoming gathering space. Often, she said, those who want to spend time at the shop are, like Baker, queer people of color who can find it surprisingly difficult to find an LGBT-friendly place to hang out or work — even in Oakland.

“There are still so many spaces where queer people don’t feel safe and don’t feel comfortable,” said Baker. She and her LGBT friends — especially transgender and gender non-conforming people — regularly experience various forms of judgment, discrimination, or harassment in shops and cafes, she said. It can be poor service at a bar, employees using incorrect pronouns to refer to trans customers, or glares from clothing store staff when queer people try on outfits that don’t follow gender stereotypes.

Eliminating those kinds of experiences is one of the goals of Qulture Collective, a new queer community center that will soon open in downtown Oakland. Located at 1714 Franklin Street, around the corner from the 19th Street BART station, Qulture Collective is a project of Baker and two other queer Oakland business owners, Julia Wolfson and Terry Sok. Wolfson and Sok co-own Garden House, a nearby sandwich shop in downtown, and are also engaged.

The three women, who all live in Oakland, have been remodeling the two-story, 2,400-square-foot space since January and are now raising funds through an Indiegogo campaign to help cover the remaining build-out costs in advance of a September opening. Qulture Collective, billed as “a safe space for queers and allies,” will have a cafe in the front of the ground-floor space, a retail section behind it, another area on the first floor with workstations, and a mezzanine and loft upstairs that can be used for classes, workshops, and studio work.

The venue will also function as an art gallery with rotating shows by queer artists. The retail shop will feature goods made by queer artisans, and the cafe will employ LGBT staff. The women also plan to host regular events, such as monthly screenings of LGBT-centered films, karaoke nights, speed dating, meditation, trivia, live performances, and a range of other programming. In the months prior to its grand opening, Qulture Collective has already hosted events for a diverse range of LGBT organizations and businesses, including a queer fashion group, an LGBT wedding services company, a group that does queer open mics, and a number of activist coalitions.

“There are a lot of community spaces that are disappearing from this area,” said Sok, who is an Oakland native. “And it’s not often that you get a community space that is also a business and is also for people who are underrepresented in the downtown area.”

Qulture Collective is opening its doors at a time when there are increasing concerns about the influence of tech money in the Bay Area and the ways in which rapid development in and around downtown Oakland could make it harder for small businesses and creative art spaces to stay afloat. As rents skyrocket and neighborhoods gentrify, activists, artists, and entrepreneurs say it’s especially critical that Oakland supports minority-owned and queer-owned businesses and venues that preserve and promote the city’s diversity.

At the same time, while Oakland has a handful of gay bars and queer-oriented venues, the city currently has no dedicated LGBT community center. And although the East Bay has a number of successful mixed-used retail and arts venues — as well as a range of co-working spaces that host artists, professionals, and community events — there aren’t any local spaces of this nature that cater to LGBT people as part of their mission.

Qulture Collective combines the longtime dreams of all three founders. Show and Tell opened in 2011, but moved to a smaller location in March of 2014, making it harder for Baker to host large events. And Baker said she always wanted to open a venue that supported LGBT events and art while also doubling as a space that enables and encourages queer people to hang out and network during the day over coffee. “It’s a space that explicitly says, ‘We are serving the queer community,'” said Baker, who will continue to run Show and Tell when Qulture Collective opens.

Wolfson and Sok, who have experience in business consulting, have long wanted to find a way to actively support local queer merchants also. As soon as the three women saw the vacant space on Franklin Street, which previously housed a gallery and espresso bar, they knew it was an ideal spot to execute their vision, since it was a central and highly visible location in downtown. “We really do want to just make a stake in this area and stay here, and be a permanent fixture,” said Sok, noting that Qulture Collective has signed a ten-year lease. “We’re right here on the ground floor with big windows, so everybody knows we’re here.”

In terms of the business model, Wolfson said that revenue from the cafe and retail space would be Qulture Collective’s primary source of income, along with additional funds from renting out the space for events. The collective may also bring in sub-tenants who could rent out the upstairs rooms for various uses — such as an LGBT-oriented production company or a group that wants to run a maker’s studio. The collective could then showcase or sell products and artwork made upstairs in the downstairs retail and gallery spaces, Wolfson said. “It’s exciting to see how many different shapes this one space can take.”

The collective has also developed sliding-scale rental prices with the goal of making the location accessible to nonprofits and other groups that may struggle to afford similar event spaces in downtown Oakland. “We can let the community come to us and tell us what they need … and that’s going to shape what the calendar looks like and what the space looks like,” Baker added.

Correction: A previous version of this article misspelled Terry Sok’s last name on a second reference. This version has been corrected.