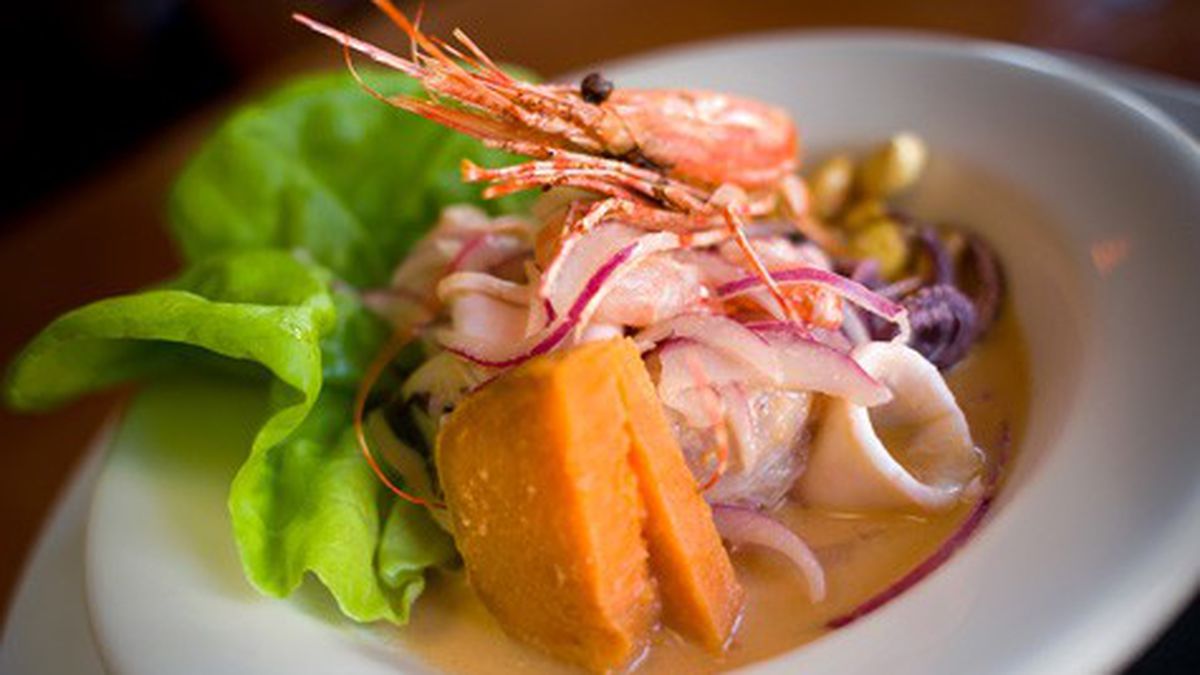 After my first meal at Pucquio, the new Peruvian restaurant located in the former Guest Chef space in Rockridge, I thought of that old saw about pupils surpassing their masters. Or, as the Chinese say, “The blue from the indigo plant yields an even deeper shade of blue.”

How else to describe what happens when a little-known pop-up takes over the restaurant wherein it first “popped up” and — from day one, it seems — puts out food that’s tastier, and more exciting, than anything I ever ate at the original pop-up host?

That’s no knock on Guest Chef. Those familiar with Rockridge’s dining scene will, of course, remember the recently shuttered rotating pop-up kitchen where a new restaurant was born every two weeks. Pucquio still has the temporary, scraped-together feel of a pop-up, with its handwritten chalkboard wine list and two-person staff — chef-owner Carlos Moreira works in the kitchen, while his wife Lissette holds down the front of the house. The setup of the space is largely unchanged, marked as it was before by a studied, somewhat sterile neutrality that’s meant not to clash with any concept or cuisine. Certainly, you’d never guess that it’s a Peruvian restaurant. (As of my most recent visit, the awning outside still said “Guest Chef.” So did our receipts.)

I expect the personal touches will come with time. Moreira told me they’re still in the process of changing everything over to the “Pucquio” name. But as far as the actual food is concerned, Pucquio has hit the ground running. I don’t know of another Peruvian restaurant in the East Bay that’s serving food that’s as good or as ambitious.

According to Moreira, his concept is “contemporary Peruvian street food” — dishes inspired by what long-haul truck drivers in Peru might stop to eat at roadside eateries along the coastal highways. But there’s nothing especially “street” about the food. The presentations are elegant; the skill and technique wouldn’t be out of place at any fine-dining temple of gastronomy. Check out the knife work on the refreshing cold quinoa salad, for instance — the precise, tiny cubes of red onion, cucumber, and chili pepper that dot the plate. Or take the pulpo al olivo: Gently steamed slices of octopus serve as a “crostini” base for an aioli made with Peruvian Botija olives — Moreira’s riff on a tapenade. It was as magical as any molecular-gastronomical concoction: the briny essence of olives distilled into something as airy and light as a cloud.

Any conversation about Pucquio needs to begin and end with its cebiches — not “ceviches,” Moreira stressed. Though both spellings are acceptable, Moreira wanted to emphasize the dish’s Peruvian origin and set it apart from the tomato-based Mexican ceviches diners might be more familiar with.

Whatever the spelling, I often find this dish excessively limey and one-note, with an unappealing texture. But Pucquio’s Mixto cebiche is in an entirely different league. Moreira mixes delicate raw shrimp, tender cubes of California sea bass, whole squid (fresh enough that you get a squirt of black ink when you bite in), soft yams, and, to top it all off, a fried shrimp head. There was so much going on — the lime-juice zing, the no-joke heat of a rococo chili emulsion, the sweetness of the yams and shrimp, the crunch and intense umami of that head — yet everything was perfectly balanced. It’s the cebiche I’ll use to judge all future cebiches.

Less spectacular, but also enjoyable, was the Moreno cebiche. Served in a martini glass, this version featured oysters and littleneck clams sitting in a pool of squid ink, which we threw back like a cocktail, savoring its murky ocean richness.

Main dishes also didn’t disappoint. The lomo saltado spoke to Peruvian cuisine’s Chinese-immigrant influence. It’s a classic beef and tomato stir-fry, but Moreira’s modern version was presented more prettily and used higher-quality meat. On one side of the long rectangular plate was a mound of rice; on the other was a little tower of French fries.

Most impressive was the pescado al ajo, a whole fried daurade fish that arrived on the plate sitting upright and curled around a mound of tender stewed chard. The fish itself was great — crisp-skinned and firm-fleshed — but the key to the dish was an intensely garlicky sauce that added deep soulfulness to every bite. After picking the fish’s bones clean, we got to work on the most satisfying bits: the cheeks, the eyes, and the pieces of soft cartilage inside the head. My only complaint was that we wished for more sauce and more vegetables. As it was, we nearly licked the plate clean.

Be prepared for a leisurely meal. Most days, Moreira is a one-man show in the kitchen, and he does a high proportion of the cooking to order, down to the shucking of oysters and the squeezing of limes. That he’s able to pull it off at all is a marvel, and once the food started coming out, our meals progressed fairly quickly. But if the restaurant is busy, the kitchen might get backed up. Fortunately, to tide you over, Pucquio serves the perfect bar snack. Moreira calls them “beer nuts,” though they aren’t nuts at all, but rather cancha: dried corn kernels that are fried until toasty and buttery-tasting (like popcorn that’s just short of popping), then coated in salt. (These make an appearance in several of the cebiches, too, adding a salty, crunchy counterpoint.)

Mind you, the prices at Pucquio aren’t low. But considering the quality, it’s worth the splurge, and the $35 three-course prix fixe is a great value. Two budget-conscious diners could share that, but you’d want to add at least one of the cebiches and an extra side dish to round out your meal.

And, though the prix-fixe comes with a dessert of the chef’s choosing, I’d be remiss if I didn’t recommend the bombitas de carretilla: beignets filled with an airy sweet-potato purée, served over a boozy, pisco-spiked crème anglaise. Yes, they were doughnuts, but like everything else at Pucquio, they were made with elegance and a light touch that was impossible to resist.

Next ArticleMid-Week Menu: The Hog’s Apothecary Is Open, a Taiwanese Noodle Shop Is Coming to Uptown, and Chef Shuffles at Plum and Haven