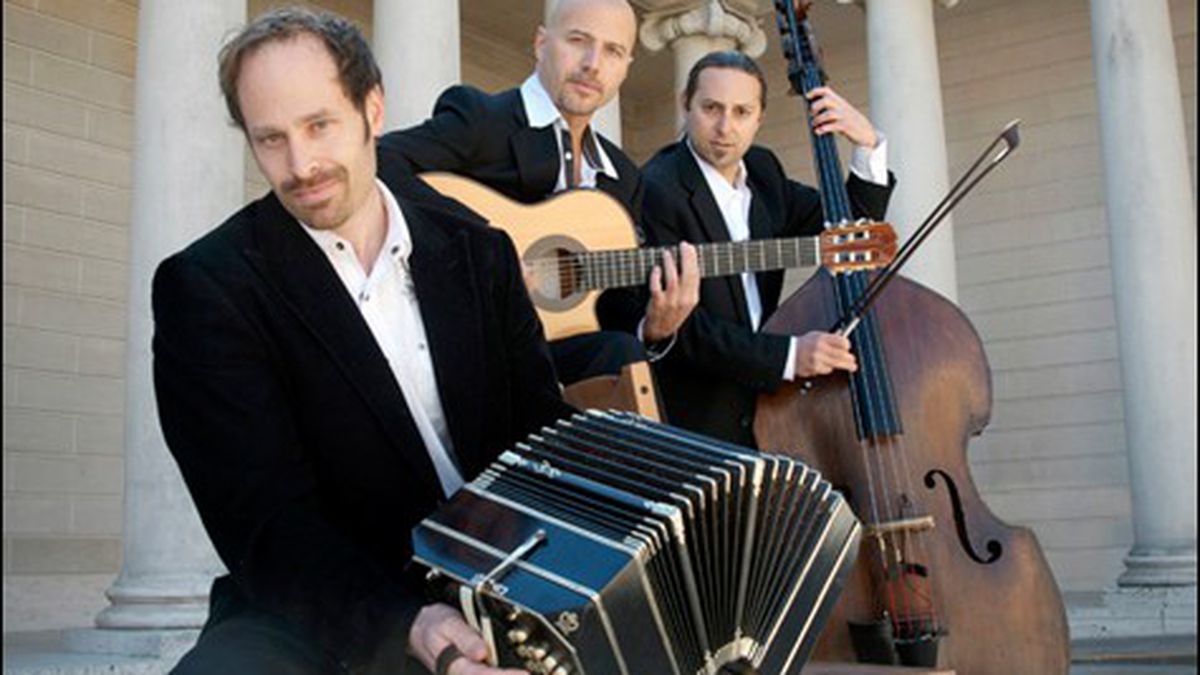 San Francisco may lie a full hemisphere away from the international capital of tango, but it’s home to a decent-size Argentine dance scene — albeit one that regularly flirts with obsolescence. The patrons tend to be middle-aged and a bit mannered. The choreography is slow and exacting, mostly executed over old, tinny records that crackle through even the most high-tech sound systems. The venues are musty, characterized by big chandeliers and banquet tables, the upstairs floors always dominated by “powder rooms.” Still, there are enough milongas — or dance nights — between North Beach and the Mission District to keep the tradition going. And if you play in a tango ensemble, this small sliver of the world could be your oyster.

That’s definitely the case for Trio Garufa, a chamber group whose members hail from three different continents. They’re three of a small handful of practicing tango musicians in the Bay Area, and as such are taxed with bolstering a scene that might otherwise wilt, lest it rely entirely on canned recordings from the Forties and Fifties. But bassist Sascha Jacobsen, guitarist Guillermo García, and bandoneón player Adrian Jost don’t merely see themselves as torchbearers. They’ve studied the form relentlessly, toured throughout the Americas, and created an ample oeuvre. Their new seventeen-track album, El Rumor de Tus Tangos, has a pointedly ecumenical sensibility: It genuflects to the Golden Era of tango (1930-1950) but also includes original compositions, a few folkloric tunes, and some modern electro-tango. For work so steeped in tradition, it has sex appeal.

And that’s an important factor for anyone making a career in dance music. On a recent Thursday evening, the trio played a gig at Verdi Club, a large ballroom just north of Potrero Avenue in the Mission District. The band was booked to play at ten, but Jacobsen and Jost both arrived an hour early for their sound check, right in the middle of a beginners’ dance lesson. About a dozen couples formed a ring around the club’s dance floor, while an instructor stood in the middle, discoursing on rhythm and tempo.

“If it’s not in time it becomes bor-ring,” she said in a thick Spanish accent. “Like this — ” She began speaking to the crowd in Spanish, letting her voice trail off mid-sentence, so that the words seemed to wither. “Ahora nosotros estamos bai-lan-do ….“

The crowd laughed politely as a small wave of feedback burbled through the club’s speakers, followed by the wheezing strains of a 1920s Argentine orchestra. As Jost and Jacobsen tuned their instruments onstage, couples began to slide with glacial elegance across the dance floor. To an observer, the movements seemed simple: Left foot steps, right foot steps, left foot extends back and drags up toward the right. But they’re performed so fluidly that each person’s body seems like a mirror image of the other. One tiny misstep could destroy that perfect symmetry.

The same could be said of tango music, Jacobsen explained, during the half-hour break between setup and showtime. He sat in the lobby of Verdi, drinking a glass of Argentine Malbec wine while Jost scrambled to write a setlist — Garcia was teaching a dance class around the corner, and probably wouldn’t arrive until ten. Jacobsen, who divides his time between Trio Garufa and another chamber group, the Musical Art Quintet, is one of the most prodigiously talented composers in the Bay Area. He’s known for taking full orchestral scores and distilling them for four or five instruments. But even he finds tango a bit taxing.

“You have to consider the rhythm, the melody, the counterpoint,” he said, pointing out that each piece funnels a huge patchwork of elements into a compressed period of time — usually three minutes. Unlike other dance forms, tango almost never has room for improvisation. There’s a style called a parrilla (“off the grill”) that gives musicians some room to solo, but it’s still trickier and a little more stylized than American jazz. In many senses, tango is a little closer to classical. It requires strict adherence to a form, and only allows musicians to take liberties in how they interpret a melody.

But Jacobsen loves it. He became smitten about six or seven years ago, after discovering the records of Ástor Piazzolla, a classical musician who played the bandoneón, or squeezebox accordion (probably the most important signifier in tango music, other than the rhythm). Piazzolla invented a new genre called nuevo tango, which mixed elements of the Latin genre with classical music and jazz — a polyglot form not unlike the music Jacobsen writes for his own groups. He is to Argentina what Bob Marley is to Jamaica.

“I was listening to Piazzolla and finding as many scores as I could,” Jacobsen said. “I bought a bendoneón and taught myself to play it. I wanted to imitate the sounds of the bandoneón on my bass.”

That was an odd detour for a conservatory-trained musician who says his brain is stepped in “the chordal textures of jazz,” but it led him to seek out fellow tangeros, including Jost and Garcia, who’d formed Trio Garufa in 2002 and played with a rotating cast of bass players. All three of them felt a connection to tango that seemed more atavistic than scholarly. Jost had grown up in Switzerland playing the accordion. As an adult, he traveled to Buenos Aires about once a year. García, who was born in the Argentine city Bahía Blanca, grew up playing tango. Jacobsen officially joined the group in 2005. “It was synchronicity,” he said.

Many historical factors contributed to the deterioration of tango in Argentina, which has a long and scattered history of military coups, dictatorships, and financial crises. By the latter half of the last century, large orchestras had given way to smaller and more economical outfits, big dance salons had closed, and the once-popular art form had become an ever-diminishing subculture. In time, tango was supplanted by other styles of pop music. Even with the electro-tangos of the Eighties — which were, essentially, traditional songs set over a machine-made backbeat — the genre failed to modernize. Jacobsen, Garcia, and Jost all see themselves as conservators of a tradition.

Nonetheless, there are advantages to being anachronistic. For one thing, Trio Garufa all but dominates the rarefied world of Bay Area tango. They divide the gigs with a couple other outfits, and there are evidently enough slots to keep everyone working multiple nights a week. And because the members of Trio Garufa are conversant in so many different musical styles, they appeal to a wide audience. At a place like Verdi Club, they tend to stick with the three traditional dance formats — waltz, tango, and the faster-paced milonga — but on El Rumor, they’re insistently, almost obstinately, inventive. Garcia plays flute and violin parts on his guitar, while Jost handles all piano duties on his bandoneón. Often, the bass plays melodies, or Jacobsen slaps the wooden belly to treat it as a percussion instrument. Some songs in their repertoire, like the Piazzolla cover “Libertango,” are deeply redolent of jazz.

Some patrons at Verdi Club would like to see this modernizing impulse become more widespread in the tango world. “I’ve been coming here for fifteen years,” said Count Glover, a dance instructor whose business card describes him as “the other side of tango.” “I go to Peña Pachamana [in North Beach] and see the same people. I go across the country to New York, and people recognize me.”

Though new blood would surely help the scene, there may yet be hope. Jacobsen said that when Trio Garufa played a CD release party at Ashkenaz a few weeks ago, nearly two hundred people showed up. The venue lacked that classic tango-club vibe, but still everyone was dancing.