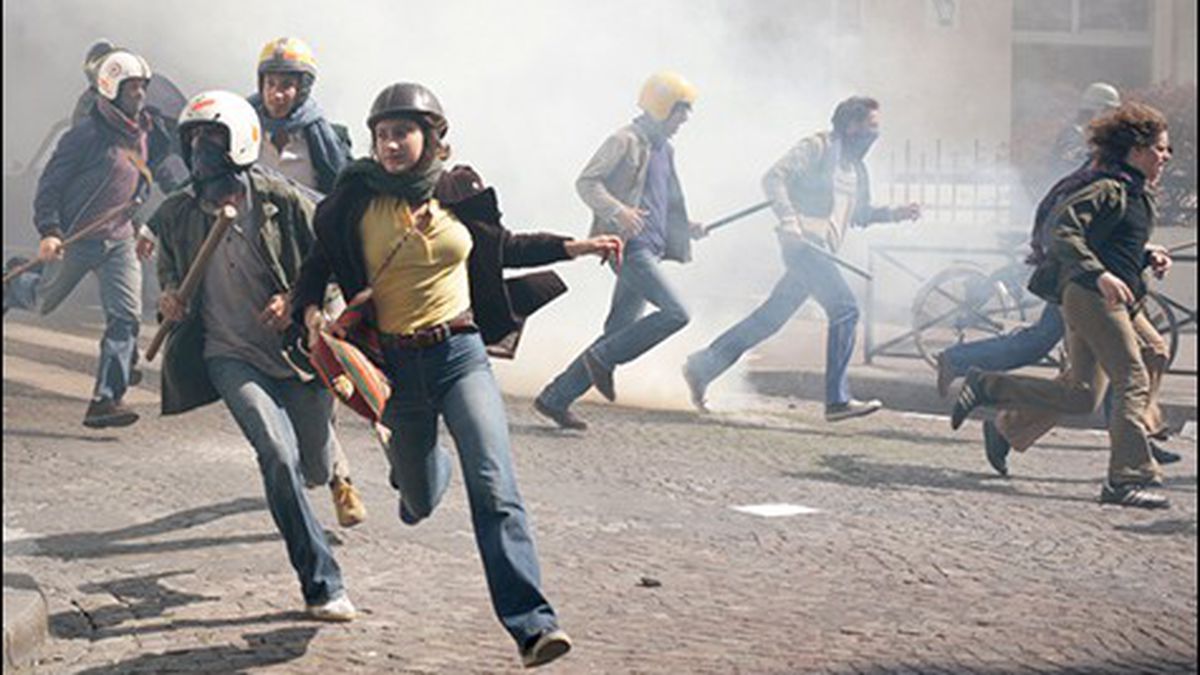 Something in the Air

Every character in Olivier Assayas’ Something in the Air is in a hurry. Dark-haired Gilles (Clément Métayer) and his high-school classmates in 1971 don’t have time for the thoughts of 17th-century philosopher Blaise Pascal. They’re too busy mimeographing leaflets for the next demonstration, boisterously arguing in leftist political meetings, and sneaking onto the school campus in the middle of the night to cover the buildings with agitprop graffiti tags and posters.

Gilles’ coming-of-age story has a familiar ring to it for both French and American audiences, with a critical difference. There are Baby Boomers, and then there are the soixante-huitards. In May 1968 a broad coalition of students and workers, upset by the policies of the government of Charles de Gaulle as well as the US war in Vietnam, took to the barricades in Paris and elsewhere in a general strike that changed the political atmosphere in France for generations. Overnight, the intense study of Mao Zedong and throwing paving stones seemingly became the main occupations of a large part of the French population, in that country’s closest equivalent to a full-scale revolution since 1789. Nothing quite like it ever happened in the US. Today, it’s hard to imagine how left-politicized European youths were in those days.

Gilles and his clique were evidently too young for the main event (the French title is Après Mai) but they desperately want to be a part of what’s left of it, three years afterward. Aside from his part-time career as a revolutionary, Gilles is a painter, a serious art student who also yearns to make films. He designs posters for the Youth Liberation Front and aspires to direct his own radical movies, à la Bo Widerberg’s Joe Hill, which captivates him and his sometimes-girlfriend Christine (Lola Créton) at the film society. Meanwhile, Gilles has a sex thing going with a willowy fellow student named Laure (Carole Combes).

Those three faces belong in a fashion layout, or in an art museum. They’re almost too pretty to be real. Their Gallic noses have not been broken fighting riot police, and despite their sympa identification with the laboring class, few of them ever worked in a factory. In fact, we begin to wonder how they support themselves. Does anybody have a job? Jean-Pierre (Hugo Conzelmann) works in a warehouse, and as time goes by Christine runs a business distributing revolutionary films. But most of Gilles’ globe-trotting friends — including Leslie (India Salvor Menuez), daughter of a US diplomat — are privileged middle-class academic types, which may explain Laure’s fascination with the drug culture and why Gilles ultimately chooses not to follow a hard political line when the violence intensifies. He’d rather concentrate on his series of erotic paintings or take a gig making a campy “dinosaurs and Nazis” movie in England. His motto changes from: “Up against the wall, motherfuckers” to: “I live in my fantasies. When reality knocks, I don’t open.”

Writer-director Assayas, thirteen years old in 1968, presumably also missed out on the excitement of the times. Maybe that’s one reason he made Carlos, his absorbing 2010 TV miniseries on notorious proto-terrorist Ilich Ramírez Sánchez. Not everyone had the ferocity and stamina of that hijacker/hostage-taker. Something in the Air functions as the artistic-hippie gloss on Carlos, an affectionate portrait of socially conscious kids who changed their minds about righteous violence in favor of trips to Pompeii and stoned parties at mom and dad’s country house. As in most of Assayas’ dramas, pop music is omnipresent, in this case the Euro-hippie ditties of Soft Machine, Nick Drake, Tangerine Dream, and British psychedelic folkies the Incredible String Band.

Gilles’ nostalgic idylls have the same flavor as Summer Hours (2008), Assayas’ bittersweet meditation on passing time. The filmmaker refuses to pillory the short-lived youthful idealism. People change. We’re encouraged to identify with the idealists without really knowing much about them, and we go along with it because they’re so attractive. The characters exist more as poster children than fully formed individuals, but somehow that seems beside the point. The excitement of throwing Molotovs and identifying with the Chinese Cultural Revolution is intense, and lasts for only just so long. Are they dilettantes? Maybe, but in the long run the only thing that matters is that you were there. Thanks to Assayas, we can pretend we were.