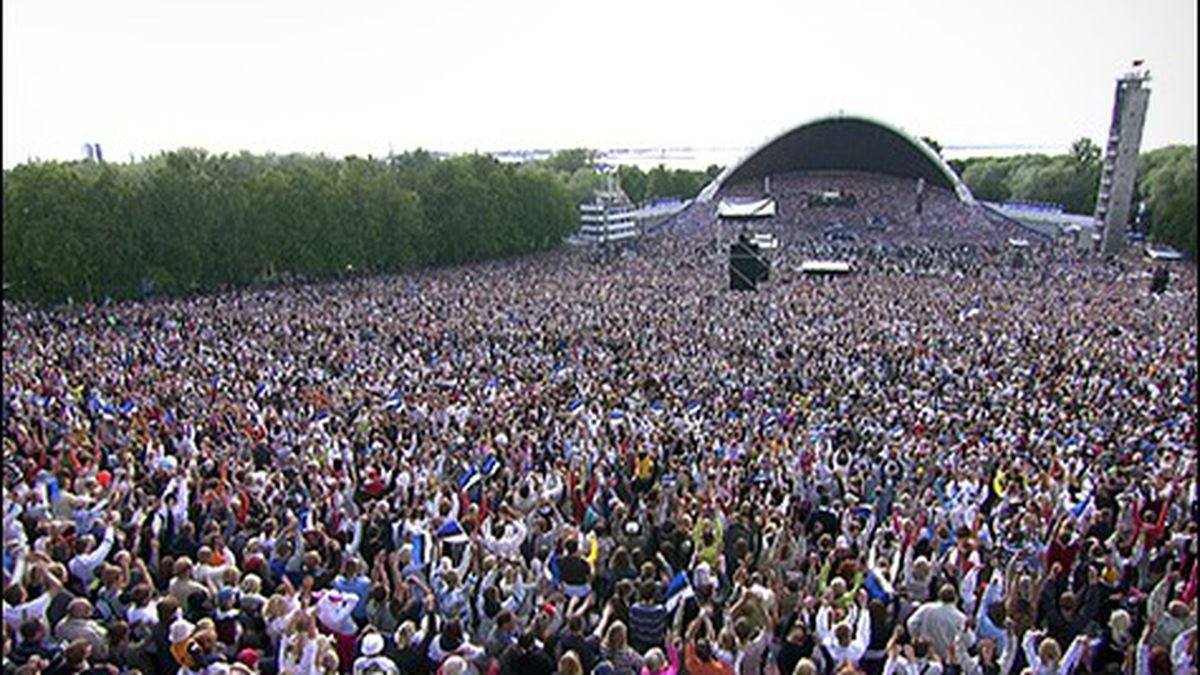 The Piedmont East Bay Children's Choir travels the globe to celebrate the revolutionary role music has played in Estonia's history.

At eleven, singer Ali Matthews of Alameda was already a citizen of the world. She has toured all over the globe with The Piedmont East Bay Children’s Choir, which has made stops in places like Slovakia, Hungary, Cuba, Siberia, and Finland. But nothing prepared her for the singing experience that awaited her in Estonia, a tiny country in Northeastern Europe with a population the size of Hawaii.

On an overcast July afternoon in Tallinn, Estonia’s capital, Matthews stood in a concert shell larger than a football field, singing shoulder to shoulder with 30,000 Estonian singers to an audience of 100,000 to create a sound she would never forget.

“You couldn’t see the barrier between the audience and all the choirs,” Matthews said. “It was surreal.”

Every five years, tens of thousands of Estonians gather on a special stage along the Baltic Sea to join voices and sing for an enormous crowd. Beginning in 1869, when Estonia was a province of Tsarist Russia, the singing celebration, Laulupidu, has helped this small Baltic nation face its many occupations — by Danes, Swedes, Germans, Russians, and the Soviet Union — and economic hardships. In 1988, close to half a million Estonians sang forbidden hymns in defiance of Soviet occupation, a “singing revolution” that helped Estonia regain its independence in 1991.

“The Estonian Song Fest is absolutely unique,” said Robert Geary, artistic director of the Oakland-based Piedmont East Bay Children’s Choir. “How can a culture rise above the oppression and suffering it’s endured and sing?”

Geary’s journey to Tallinn began while he was waiting at Heathrow Airport back in 2000. There he stumbled upon another choir, an internationally famous Estonian group called The Estonian TV Girls’ Choir, which had won awards at a competition in Spain and was heading home. Aarne Saluveer, its conductor, invited Geary to audition for his country’s national singing event. Geary’s Piedmont Choir tried out and made it, and the group has since performed in 2004, 2009, and soon in 2014, becoming one of the few American choirs to sing at the festival.

Matthews’ Laulupidu experience, which took place in 2009 (She’s now sixteen), was captured on film, and will air on Saturday, July 5 as part of the documentary screening of To Breathe As One on KQED.

The filmmakers, James Tusty and Maureen Castle Tusty, brought Estonia’s powerful singing tradition to the world in their 2007 documentary The Singing Revolution, which played in 125 North American markets and was cited by The New York Times as one of five “maverick” films changing the independent film industry.

In To Breathe As One, Tusty and Castle Tusty follow the Piedmont Choir’s 36 singers as they arrive in Tallinn and sing in the powerful event. The documentary explores the festival’s music legacy and historical meanings as seen through the eyes of California adolescents.

“It’s amazing how singing just bonds people together,” said thirteen-year-old Darren Fletcher, an Oakland resident. “No border, nothing. That’s what I truly love about this festival.”

“You feel like you’re Estonian even if you’re not,” said Joseph Starc of Oakland, also thirteen.

As Matthews, Fletcher, and Starc relive the experiences on screen, a new generation of Piedmont singers will be on stage for Estonia’s epic two-day event, July 5-6. The 46 Californian singers (aged 13 to 18) will be performing alongside 32,000 mostly Estonian singers for an audience expected to surpass 150,000 to 200,000.

“Most of the festivals we attend are wonderful festivals where choirs from around the world come and participate and sing their music, but they are not an expression of an entire country’s identity,” said Geary. “To be in touch with that, to observe that it does have real power in many ways, not just to make you feel good, but to unify, to preserve a people’s identity, that’s unique.”

“It’s a place where all generations meet … where singers tell a story for the next generations,” said Estonian TV Girls’ Choir conductor Aarne Saluveer, who is hosting the California singers for the third time this week.

Singing in Estonia is no longer about fighting occupations, but it remains a cultural catalyst that energizes the nation, and remains a defining part of their history and lives.