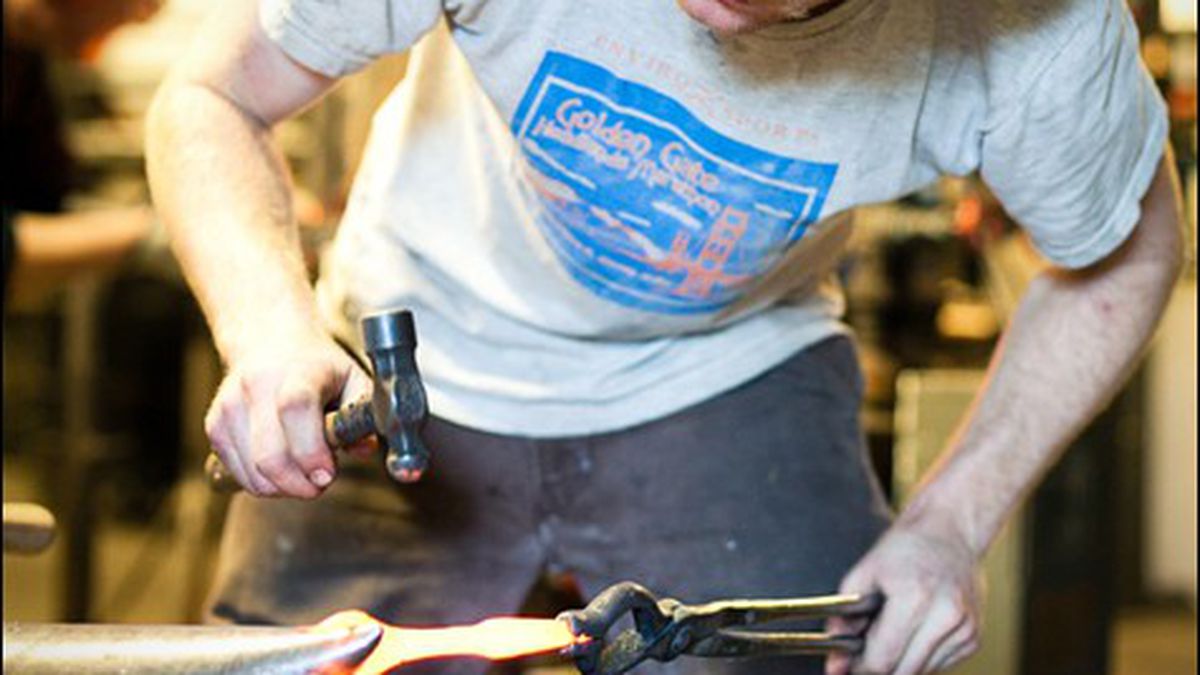 Shaping an Arts Education at The Crucible

The West Oakland institution allows aspiring artists to forge their own path.

If, anytime within the past ten weeks, you were to step foot inside the 56,000-square foot warehouse that houses The Crucible (1260 7th St., Oakland), a nonprofit industrial arts education facility in West Oakland, you’d have encountered quite an industrious work-in-progress: a five-level, scaffolding-like set design being soldered, welded, and hammered out of wood and steel for the institution’s January production of Machine: A World Premiere Fire Opera. It has taken a twelve-person crew of Crucible employees and volunteers to build a set for the intricate presentation (opening on Wednesday, January 11, and running Wednesdays through Saturdays until January 21), which melds opera, rock ‘n’ roll, and percussion with The Crucible’s signature displays of fire performance, glass blowing, and other industrial arts activities.

But despite all the blood, sweat, and steelwork that have gone into the endeavor, Steven Young, The Crucible’s executive director, will tell you that such elaborate displays comprise just a fraction of the organization’s overarching objective. Year-round, the primary purpose of the massive facility is offering more than five hundred industrial arts classes, workshops, after-school programs, and youth camps, ranging from weekend intensives to ten-week courses in everything from neon art to bronze casting and stone working. And, unlike more formal educational arts institutions with courses open only to those students who’ve made it past an often rigorous application process, The Crucible’s curriculum is open to anyone who wants to learn. “An industrial warehouse can be intimidating for some people,” Young said, “but you don’t have to have made anything before. People can come in without any background or skills and immediately engage in something in an environment that’s extremely positive and non-competitive.”

That non-competitive atmosphere is what Carla Hall, The Crucible’s youth program director and a longtime arts-centric metalworker, had in mind when she proposed adding entry-level women’s welding and blacksmithing courses to the Crucible’s extensive curriculum. Hall — who was raised in North Carolina among what she called a “very self-sufficient” family that included a woodworking grandfather — grew acquainted and comfortable with the workings of tools and machines from a young age. But despite her early introduction to the medium, she recognized that not all females grow up with such a natural introduction to manipulating hot metals — a trade that, for newcomers, can be perceived as male-dominated and intimidating.

That’s not to say that Crucible courses are segregated by sex. Hall’s weekend-long women’s workshops (the next iterations of which take place March 3-4) were added as a complement to the co-ed classes already offered in the same subjects, and she said different women gravitate toward each. The idea is to provide people with options. “Traditionally, I think that industrial environments and industrial skills such as welding and blacksmithing haven’t been so accessible for women to participate in,” Hall acknowledged. “There’s a different dynamic in a women-only class that tends to be more supportive, and I think comfortable for some people. And the learning curve tends to be higher.” But whether women-only or co-ed, the courses follow the same project-based, skill-building curriculum. In the case of the Introduction to Blacksmithing class, students typically learn how to manipulate metal into utilitarian objects like forks and letter openers — foundational skills that can later be applied to more artful, large-scale projects should students move on to the organization’s more advanced courses.

It’s worth noting that while The Crucible can equip its students with practical knowledge of certain crafts (in addition to more offbeat skills like juggling and fire-eating), it doesn’t offer certification or concerted job-placement programs to enrollees, as does Laney College’s Welding Technology certification program, for example. Young said that in order to offer such programs, The Crucible would need to comply with state requirements that could change the fundamental nature of the organization. He added that while some students develop an interest in a given field and later seek out more formal training, others move on to artistic endeavors. He cited Sean Orlando and David Shulman, members of the Oakland-based Five Ton Crane artist collective and both former Crucible students. The duo makes up two-thirds of the lead team behind a forty-foot rocket sculpture (dubbed “Raygun Gothic Rocketship”) currently on display on Pier 14 in San Francisco. “We’re really focused on using the industrial arts to make art,” Young explained. “Call it an ‘artistic expression of the industrial arts.’ Our mission is to inspire creativity.”

For those seeking some artistic inspiration, The Crucible’s winter 2012 semester begins on Saturday, January 28, with weekend through ten-week-long courses running through April 9. Winter youth classes (for ages eight to seventeen) follow different schedules within the same period, with scholarships available.