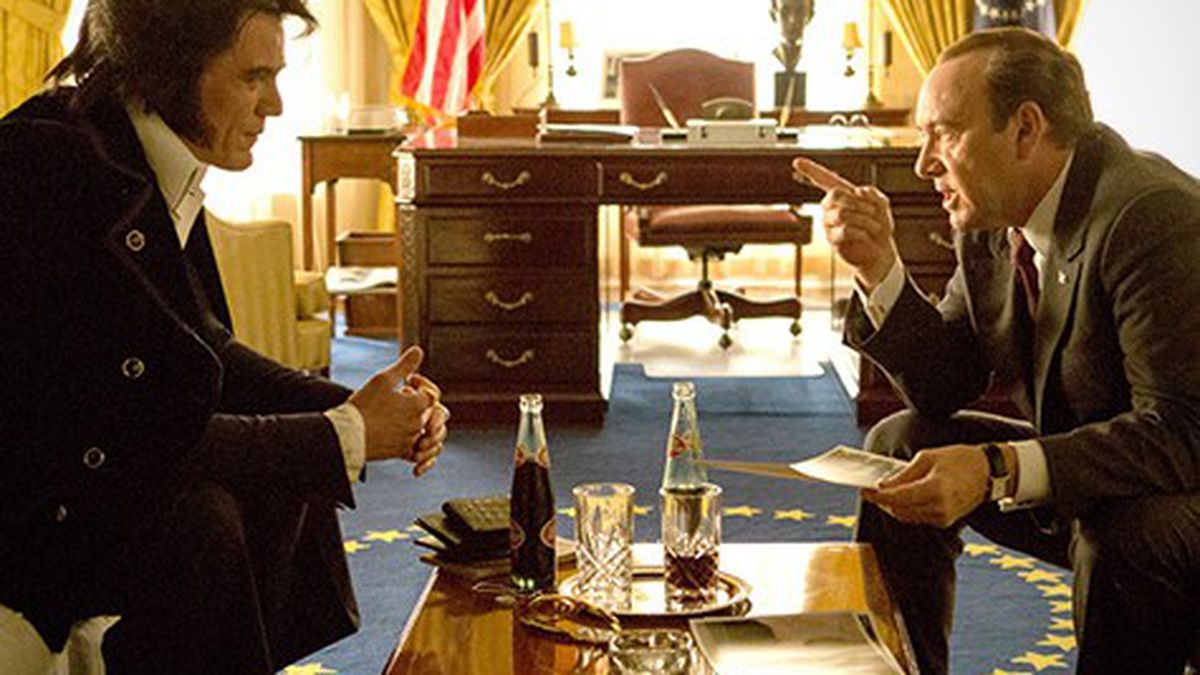 A hunka hunka burning egos in this nutty historical riff.

Elvis & Nixon? What a dubious concept for a major motion picture. The December 21, 1970 White House meeting of rock music figurehead Elvis Presley and President Richard M. Nixon seemed to have been adequately summed up, once and for all, by the well known black-and-white photo of The King, in full regalia including a belt buckle the size of Rhode Island, shaking hands in front of a line of flags with Mr. “I Am Not a Crook” himself, who’s flashing his best nervous “What the hell am I doing here?” smile. Worlds collided that day, it’s true. That image was duly noted, filed, and mostly forgotten.

Yet here’s Elvis & Nixon, big as life and unrepentant, happening all over again, with Michael Shannon impersonating Elvis and Kevin Spacey as Nixon. The mind boggles. It’s obvious that neither of the actors really resembles his subject. Steely-eyed Shannon (99 Homes, Batman v. Superman: Dawn of Justice) is and always will be the ideal screen predator. We can’t imagine him ever breaking into “Love Me Tender,” unless it would be addressed to a tied-up hostage. As Tricky Dick, Spacey is forced to reach deep down into his untrustworthiness bag, but let’s face it, nothing in the character actor’s “rogue file” — not his work in House of Cards, Margin Call, or Casino Jack — has quite the enormity of Nixon’s crimes. Remember, the film takes place in Nixon’s first term, pre-Watergate. He was running for re-election. He would kill his grandmother to remain in the Oval Office.

So Shannon and Spacey have their work cut out for them, to portray the two most recognizable public figures of their day — the pill-popping, grilled-peanut-butter-sandwich-eating King of Rock ‘n’ Roll and the official National Wart — in recognizable human terms. Or not. There’s a case to be made that director Liza Johnson’s film, written by Joey Sagal, Hanala Sagal, and former leading man Cary Elwes, is one short step away from being a hyper-absurd riff on American pop culture — a trip to the daffy outer limits where celebrity gossip meets politics and approaches total lunacy. That’s Shannon and Spacey’s natural turf, of course. The two most notorious men in the world sit down and talk, and they’re both stone crazy. Nixon lusts for the Southern voters who worship El, and more than anything else, Elvis wants a badge from the Bureau of Narcotics and Dangerous Drugs for his collection. To get it, he’s volunteering to be an undercover federal drug agent and infiltrate subversive rock bands such as the Beatles. The King and The Prez are in love with each other and they don’t know it. Elvis & Nixon is a devilishly funny comedy, the nutty step-grandchild of Dr. Strangelove.

Actors Alex Pettyfer and Johnny Knoxville are a hoot as Elvis’ cronies Jerry Schilling and Sonny West. Colin Hanks (TV’s Fargo) turns in another apt supporting role as White House advisor Egil “Bud” Krogh, who sincerely believes his boss needs to be seen with someone as popular as Presley. Nixon is annoyed at the suggestion at first — the meeting would cut into his nap time. But it’s Shannon and Spacey who conclusively put the concept over.

It’s great fun to watch them in deep character, verbally sparring. The scene with Elvis visiting a D.C. African-American donut shop (and getting very little respect) is a miniature gem of social commentary. Ditto Elvis’ soliloquy, lamenting his situation: “I’ve become a thing, an object, no different than a bottle of Coke.” Spacey has Nixon’s herky-jerky gestures down perfectly, along with his combative insecurity — “You think I could take him?” he earnestly asks an aide, right before the big sit-down. Naturally, Elvis strolls right in and takes control of the White House. With any luck, from now on we’ll think of Shannon and Spacey every time those other guys’ names come up.

Best Place for Artists to Relocate