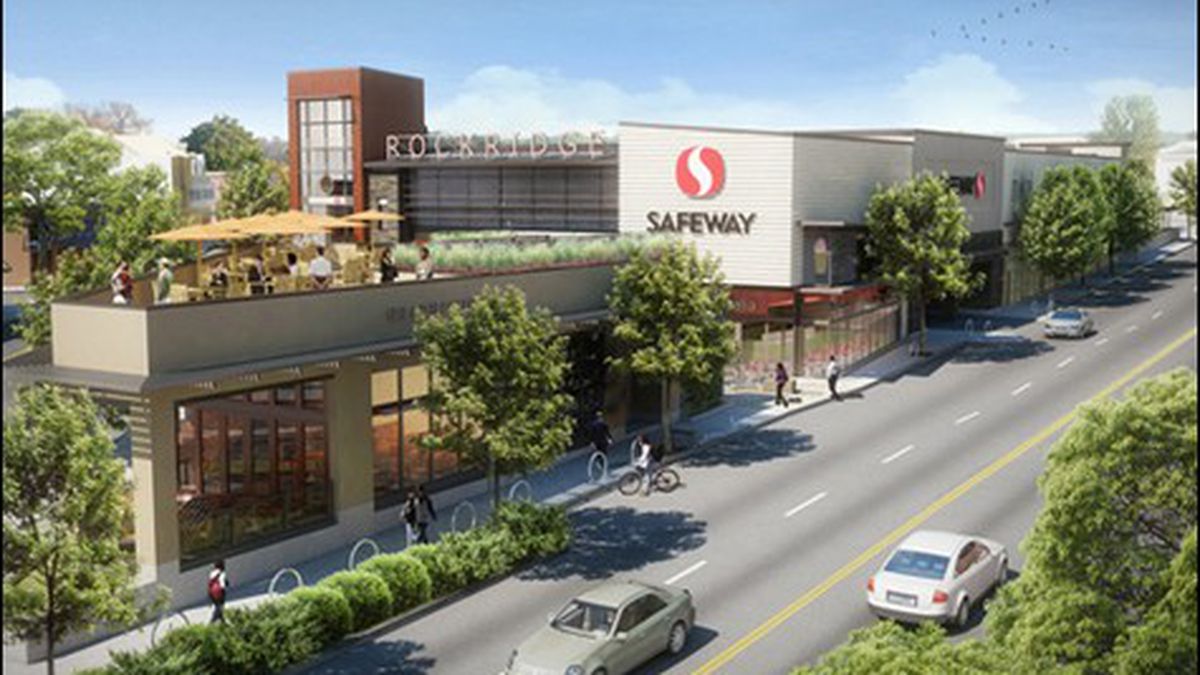 Shall We Shop at Safeway or Safeway?

The supermarket chain's own data shows that its plans to greatly expand its two Rockridge stores depend largely on the same customers.

When Safeway first came before Rockridge residents in 2007 proposing a remodel of its College Avenue store, many neighbors weren’t necessarily opposed to the project. “At that time, they had people screaming out ideas” for how to improve the store, recalled Susan Shawl, cofounder of the neighborhood group Concerned Neighbors of the College Avenue Safeway. Residents said they wanted more organic food, bigger aisles, and a more varied selection, “but mostly they were saying, ‘We don’t want it real big because we have a big one up the street,'” Shawl said.

Fast forward nearly four years and through three different sets of designs, and the project has now become the most contentious issue in the neighborhood precisely because Safeway wants to double the size of the store. And a major complaint from people opposed to this expansion stems from the concern that Safeway doesn’t seem to be taking into account how this project is overlapping with its plans to greatly expand its store at the Rockridge Shopping Center at Pleasant Valley and Broadway, just one mile up the road.

“It’s kind of a conscious blindness,” said Stuart Flashman, a well-known Oakland attorney and board chair of the Rockridge Community Planning Council, a group that has had several meetings with Safeway regarding the two Rockridge expansions. “If they look carefully where the customers are coming from, they’ll realize these two stores are going to be competing with each other.”

In fact, the proximity of the proposed giant supermarkets, and the apparent overlapping of their respective customer bases, raises questions as to whether the Safeway stores will be successful when the planned remodels are complete, or whether competition between the two will result in one of them ultimately failing, leaving Oakland with yet another large, empty storefront.

Both Safeway officials and Oakland city planners, however, appear to be unconcerned about such a possibility. “One does not impact the other — different customers at each store,” wrote Safeway spokeswoman Susan Houghton in an e-mail exchange for this story.

But Safeway’s own customer tracking data tells a different story. When the company first proposed rebuilding both stores, its representatives held several Rockridge town hall meetings. During one of the meetings for the Rockridge Center store on Pleasant Valley, Safeway representatives presented a map of where the store’s customer base lived, using data from shoppers’ Club Cards, a Safeway membership program.

“I recall the Rockridge Center covered North Oakland and maybe a little into Berkeley and some into Piedmont,” Flashman said. Shawl, who was also at the meeting, said what struck her about this map was that the coverage area for the store actually included the College Avenue Safeway, too.

Safeway shoppers’ Club Card data was also used in analysis of the College Avenue store’s customer base. The Oakland Planning Commission’s draft environmental impact report notes that “Safeway used customer Club Card data to determine the distance customers traveled to the existing stores.” Based on this information, Safeway concluded that the College Avenue store’s customers live within an average of 2.7 miles from the supermarket. The distance between the two stores is exactly 1.2 miles. In other words, Safeway’s own tracking data shows that it will be relying on many of the same customers to keep two massive supermarkets afloat.

“They clearly overlap quite a bit,” Flashman noted. He said that if a map could show the customer base from both stores with one store being blue and the other red, “somewhere around two-thirds of the area would be purple.”

Safeway declined to provide the Rockridge Center map for this story, but Houghton wrote in an e-mail that it is not unusual to use general market data to help identify where customers live and work, and “how stores support those folks and their drive patterns.”

Houghton also wrote that there have been situations, in San Jose, for example, where Safeway has built a larger store and shut down a smaller store nearby. “This, however, is not that situation,” she assured.

Houghton also acknowledged that the two expansion proposals are being handled by separate entities — the parent corporation, Safeway, Inc., and its wholly owned subsidiary, Property Development Centers — but she wrote, “They are very much in communication with one another.” However, the expansions aren’t necessarily being considered together. “They are both stand-alone projects,” she wrote. “They have been stand-alone stores.”

The two giant stores will have much in common, and will sell many of the same products at the same prices. Safeway is planning for both stores to have expanded deli, bakery, and floral departments; service counters for meat and seafood; pharmacies; and possibly cafes, sushi bars, and Starbucks kiosks.

Benefits to the expansions, according to Safeway, include hundreds of new jobs and tens of thousands of dollars in property and sales tax revenue annually for the City of Oakland and Alameda County.

The Rockridge Center Safeway now stands at 48,000 square feet. If the current proposed expansion plan is approved by the city, the entire shopping center will be torn down and rebuilt — nearly doubling in size. The new Safeway store would increase to 65,000 square feet. For reference, that’s nearly two-thirds the size of a typical Walmart store. The project is being spearheaded by the Safeway subsidiary Property Development Centers, which develops retail shopping centers.

But many residents have no qualms about the proposed size of the Pleasant Valley store. “We think the Rockridge Center expansion makes a lot of sense; it could be even a bigger project than what Safeway is proposing, more urban,” Flashman said. “On the other hand, the College Avenue Safeway is on a two-lane street — that big of a project doesn’t belong there.”

The College Avenue store, a 1960s-era, one-story building with a suburban design, currently is just under 25,000 square feet. It’s directly across College Avenue from small independent business such as Cole Coffee and Yasai Produce Market.

Safeway is proposing a complete demolition of the current store, along with an adjacent gas station, and the construction of a new, two-story, 62,000-square-foot building that would house a 51,500-square-foot Safeway on the second floor and eight separate ground-floor retail shops. The new College Avenue Safeway would be nearly the size of a football field, and bigger than the existing large store on Pleasant Valley. The College Avenue project is being done by Safeway, Inc. rather than Property Development Centers.

Although opposition to the project is strong, there are numerous supporters as well. According to a Safeway web site that includes designs and details, more than 650 people have signed up to say they approve of the proposed expansion. One local resident, Jeff Small, said he understands how people could complain about the size of the building, but he still welcomes the redesign because he is excited to have the ground-level shops.

“Since the Safeway store is not visible, it’s on the second floor, I don’t see how it’ll change the nature of the neighborhood,” he said. “I wasn’t a fan of the previous plans but when they added the individual retail stores I started supporting it.” However, he said he might still oppose the project if Safeway doesn’t rent first-floor shops to independent retailers.

Flashman agrees that having the supermarket on the second floor is an improvement, but contends that it still should be scaled back. The major problem, he and other opponents say, is that a bigger store will bring in more automobile traffic and congestion from outside the area, which is more than the two-lane street can handle. Opponents also argue that Safeway and city planners seem to be ignoring the cumulative impacts of having two large supermarkets in such close proximity.

“They ought to be looking at both stores together in traffic impacts, air quality, noise and greenhouse gasses,” Flashman said. “We think that it would make much more sense to make the College Avenue store a satellite store and drop the size down from 50,000 to 30,000.”

But Houghton argued that a smaller store doesn’t fit with the company’s new “lifestyle” model for its supermarkets: “In order to accommodate that, we need a much larger store.”

In the months ahead, it will be up to Oakland’s planning commission to approve or reject Safeway’s designs, and at this point it does not appear that the commission believes that having two large supermarkets, carrying mostly the same products at the same price, one mile from each other, will be a problem.

Darin Ranelletti, the city’s case planner for the Rockridge Center development, and Peterson Vollmann, the city planner for the College Avenue store, both said that the planning commission is looking at the two projects concurrently, but said that ultimately each will be decided on its own merit.