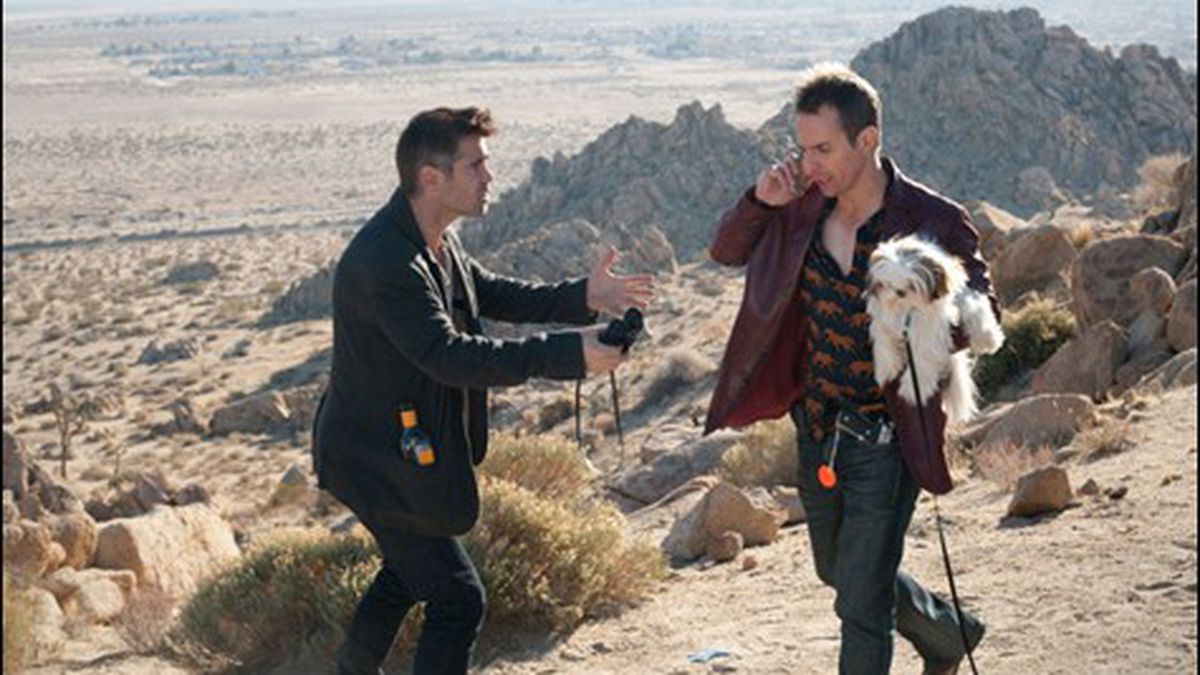 It’s fall now, the 3-D robot epics have gone away, and Hollywood can finally return to one of its favorite styles of screen entertainment, the Quentin Tarantino imitation. Case in point: Martin McDonagh’s exasperatingly predictable Seven Psychopaths.

As we’re all surely aware, McDonagh is a celebrated playwright/screenwriter/director of the Hibernian persuasion. The 42-year-old London native, son of immigrant parents from Sligo and Galway, has mined the twin Irish enthusiasms for glibness and malice to great effect in the Leenane Trilogy, three stage plays produced in 1996 and 1997, and his first American-set production, 2010’s A Behanding in Spokane. McDonagh’s specialty is combining the craic of a loquacious saloon raconteur with a swift crack in the teeth — eloquent mayhem, with all the literary trimmings.

Naturally, his shift in focus from the Western Eire outback to Left Coast USA has much to do with “fillum.” In Bruges, a delicious portrait of a pair of donkey-eared hit men played by Colin Farrell and Brendan Gleeson, was one of the best movies of 2008, even if McDonagh had trouble ending it — one of his recurring difficulties. Not for him the subtleties and social conscience of a Neil Jordan or a Ken Loach. McDonagh wants to go upside our heads and make us laugh about it while our ears are ringing. (Thank you sir, may we have another?) To that he brings a curious fetish for animals — The Lieutenant of Inishmore features a killer who adores his cat — and a taste for the tried-and-true trappings of Hollywood hipsterism. That brings us inevitably to Seven Psychopaths, his all-American come-out roll for the multiplexes, one of the most heavily advertised releases of the season.

Marty (played by Farrell) is a dim-bulb Irish moveover would-be screenwriter who can never quite find the handle in LA. His faltering screenplay functions as a story within the story; the title’s septet of violent weirdos comes from his imagination, with help from his pals Hans (Christopher Walken) and Billy (Sam Rockwell), a pair of losers who make ends meet by kidnapping pets and then collecting the rewards. On their rounds they make the mistake of grabbing the wrong mutt, Bonnie, a Shih Tzu belonging to a hood named Charlie Costello (Woody Harrelson, unusually one-dimensional). Den he muss kill dem.

Along for the bumpy ride come retired serial killer Zachariah (Tom Waits, with pet rabbit), Marty’s squeeze Kaya (Abbie Cornish), Charlie’s goons (Zeljko Ivanek and the perennially authentic Kevin Corrigan), a character called “The Quaker” (Harry Dean Stanton), and a pathetic victim named Sharice (Gabourey Sidibe from Precious), most of who arrive at the same unfortunate conclusion. It is as if all the odds and ends left over from a “typical” Tarantino project were swept up in a dustpan and dumped into one oafish crime yarn without a second thought. Everything they do, everything they say, is as flat and stale as yesterday’s spud pancake.

There are redeeming facets. Rockwell is the best thing about the movie, zinging McDonagh’s putdowns with giddy abandon. Walken and Waits weather the storm with their usual professionalism. Farrell, sad to say, plays at a mere suggestion of his In Bruges power. In all fairness, a different complexion comes over the “dark comedy” in the last quarter, with Rockwell’s campfire ravings in the desert, but by then it’s too late.

The scenario is not nearly absurd enough, if that’s the way McDonagh wanted it — we can only guess his intentions, a bad sign for an “important” movie. Is it a parody? A spoof? Robert Rodriguez — not to mention Guy Ritchie — would be ashamed to present something so bald on ideas as Seven Psychopaths. In the end it makes us appreciate Tarantino, if we were looking for new reasons at this late date. As for the whiz kid from Camberwell: Better luck next time, boyo.

Ghost in the Drywall

Foes of Richmond Coal Back For Another Try