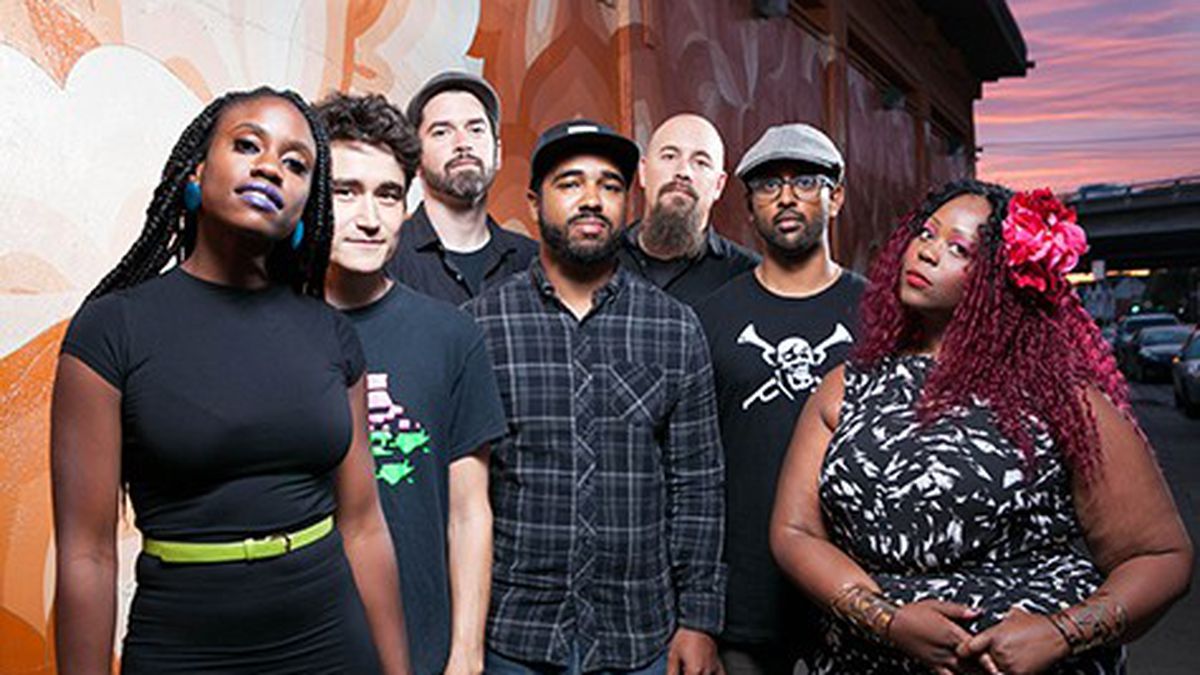 Sessions with the Seshen

The genre-defying seven-piece band experiments with new material for its residency at Leo's, "Love, Oakland."

Though the members of many bands consider themselves to be family, the Seshen is composed of a group of musicians who are about as close as one can get without being bloodrelated. Bassist Aki Ehara and singer Lalin St. Juste are married and the band rehearses at the couple’s El Cerrito home, which belonged to Ehara’s grandmother. Ehara, producer Kumar Butler, and keyboardist Mahesh Roa are all Richmond natives and former classmates.

Akasha Orr, the band’s other vocalist, and percussionist Mirza Kopelman are longtime friends of Ehara and St. Juste. And even though the band found drummer Chris Thalmann through Craigslist, Thalmann and St. Juste realized that they went to school together in Altadena, an LA suburb, as well as at UC Santa Cruz. “But Lalin is two years younger and I was way too cool to associate with someone like that,” Thalmann teased.

The members of the Seshen crack each other up easily, which put the other musicians and venue staff at ease during soundcheck at Leo’s before their performance last week. They have been playing at the North Oakland club every Tuesday for their September residency, “Love, Oakland,” and seem to have made themselves at home. As the percussionists tested their instruments, Orr removed a healing crystal from her purse and performed a brief ritual — to clear negative energy from the space, she said, dragging the aromatic smoke of palo santo over the other bandmembers’ clothes.

The musicians spend their free time together and agree that making music almost never feels like work. “Even practice feels like hanging out,” said Ehara as the band gathered in the green room. “Usually, one of us has to be taskmaster and keep everyone on track because otherwise we’ll act moronic the whole time.”

Since the release of its debut, self-titled album in 2012, the Seshen has become well known in Oakland’s music scene for its energetic blend of indie pop and neo-soul with electronic production. Unravel, its 2014 EP, saw the band shift its focus from down-tempo tracks to the upbeat sound that now characterizes its live shows. Throughout Unravel, St. Juste and Orr’s rich voices radiate warmth as fat baselines and crunchy synth riffs swell into rhythmic grooves, while sparkly keys and percussion instruments ebulliently dance over husky, reverberating vocal samples. As the principal composer, Ehara skillfully fosters collaborations among the bandmembers so that each person has an opportunity to demonstrate his or her chops without competing. Ehara said that he intentionally sought a large ensemble in order to translate its recorded sound to its live performances.

“We seem to get typecast as a giant band,” Kopelman explained. “But we all have our specific parts. … We don’t have anything extra for bigness’ sake.”

The Seshen has been using its Leo’s residency to experiment with new material that it’s currently workshopping for its upcoming album, due out in 2016. This has imbued its performances with a sense of spontaneity that was sometimes previously lacking. Some of the band’s past shows have been so tightly rehearsed that they hardly deviated from the recorded versions of its tracks, but performing weekly at the same venue has pushed the musicians to explore new sounds. St. Juste opened last week’s set with a stripped-down Amy Winehouse cover that showcased her expansive vocal range. Later, during a particularly high-energy point of the night, Roa launched into a jubilant keyboard solo while the rest of the band danced on stage.

In addition to serving as a creative catalyst, the residency has given the musicians the opportunity to play with other local artists that inspire them. Kev Choice, an influential multi-instrumentalist and rapper, opened the first “Love, Oakland” show and drew a huge turnout.

“Everyone [who has played with us] has a passion they’re going after and contributing to the community in some way,” said St. Juste. For instance, jazz singer Naima Shaloub, last week’s opener, frequently works with incarcerated women. And Lila Rose, whose recent album We.Animals. deals with environmentalist themes, plays with the Seshen next week.

Though “Love, Oakland” takes place in the middle of the workweek, the Seshen has filled up Leo’s every Tuesday. The residency, the bandmembers explained, is a way of thanking the city that nurtured their creative growth. “We came up with ‘Love, Oakland’ as a way to celebrate what we’re experiencing in this community,” said St. Juste. “Anytime we do a show in Oakland, people are so receptive,” Kopelman enthused. “It feeds our energy and makes us love this place even more.”