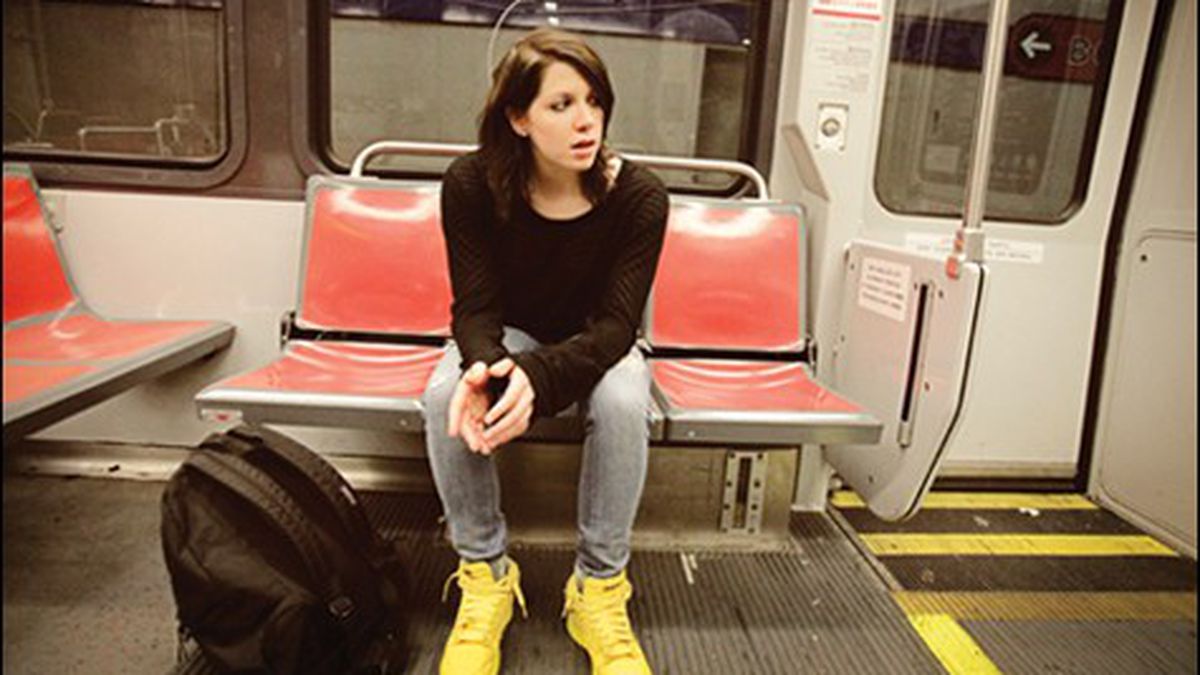 Local rapper is a one-woman production.

K. Flay is the newest strain of San Francisco rapper: a small, fair-skinned white woman who gravitated to hip-hop while studying sociology at Stanford University. Raised in the suburbs outside Chicago, she looks like she could have been cast in Ally Sheedy’s role in The Breakfast Club. K. Flay, whose real name is Kristine Flaherty, keeps her hair chocolate-black and wears heavy eye liner. She has a fashionably disheveled look. She’s sharp-tongued, with a sweet demeanor. She uses each of these traits strategically.

“It’s still shocking to people who knew me growing up that I’m doing this,” she said, interviewed at a cafe near her Haight district apartment. “Everyone thought I would be a doctor or something, have a serious job.”

For all the self-deprecating language, she obviously takes hip-hop quite seriously. K. Flay came to the genre by way of a house DJ she befriended at the end of her freshman year at Stanford. “He was the first person I ever saw recording music,” she said. “That was really fascinating to me. That’s how I got involved in the production stuff.” At that time, she had scant musical experience. Her dad had taught her a few tunes on guitar, but otherwise she hadn’t taken lessons or been involved in the performing arts. In high school, she played basketball and considered herself to be more of a jock. Her main musical talent was singing along to fast rap songs and learning the lyrics by rote. That mostly came from being fast and chatty, she said. “I like to cram a lot of words in. That comes through in my music.”

It’s a weird time for hip-hop, when the hot new stars are suburban white girls who launch their careers at high-profile universities. K. Flay is just one in a spate of quirky, all-girl acts, whose ranks also include Toast and the Oakland trio Hottub. Their closest pop analogue is the suddenly ubiquitous singer-rapper, Ke$ha, who brings her own brand of trashy femininity to a traditionally macho genre. Not all of these women are like K. Flay, but there are certain similarities that align them. They set their raps against spare, computer-generated dance music. They place heavy emphasis on fashion and stage persona. Not surprisingly, most of them play well to the club crowd.

What sets K. Flay apart, really, is a certain sense of craftsmanship. She makes all her own beats, manages her own web site, controls her own recording process, and essentially serves as her own rhythm section. She produces tracks on Logic and Ableton and does most of her live show via laptop, using a mini sampler called an MPK. “I used to perform with a guitar and my beats,” she said. “But the past few months I’ve been doing a solely controller-based show…. It’s basically me building beats onstage.”

K. Flay didn’t grow up doing any of the stereotypical techie things, but she became a software geek after setting foot in the music industry. The real turning point happened in the summer of 2004, when she was working a job making desserts at a French restaurant in Chicago. The position paid $4.85 an hour and involved a lot of kitchen hazards. “It was a super grueling job,” she said. “I kept burning myself. Everyone was always yelling.” With those earnings she bought a basic Edirol keyboard and taught herself how to make beats. By the time she finished college, K. Flay had amassed enough material to perform a full set at Bottom of the Hill. Two years later she released a mixtape and sang the hook for “Coastin,'” a languid, piano-based track by the hip-hop group Zion-I. In that song, K. Flay sings about indolence. When life brings trouble, you can fight or run away/I have no struggle, you can watch me run away, she coos.

Such lyrics contrast the tone of K. Flay’s new self-titled EP, which is driven, in large part, by nervous energy. The rapper’s voice constitutes much of her appeal. It’s fast, high-pitched, and girly. She raps with a lot of internal rhymes and alliteration. Her beats tend to stutter. The break-up ballad “Messin’ with my Head” has her half-singing over a patchwork of bleeps and grating guitar chords that never quite lock into a groove. Fuck you, and everything you said/It was all lies, messing with my head she mumbles, as if to quietly spurn an ex. In “So Fast, So Maybe” she attempts to psychologize herself: I’ve been outta wack since ’92, when my folks split up, and I came unglued. “No Duh,” a spoof on hip-hop braggadocio, is indisputably the EP’s best track.

Whether or not K. Flay constitutes an entirely new phenomenon in hip-hop isn’t yet clear. White-girl rap, party-girl rap, suburban rap, and hipster-hop are all well-established tropes, as is the storyline of an emcee launching his or her career in academia. (Kanye West‘s first three albums were all college-themed, after all.) But K. Flay managed to carve out her own slice of the genre. She’s a one-woman operation, so when you go to her shows you see her darting frantically between a laptop and a microphone. Her beats show ingenuity and she’s able to rap at fast tempos, but keep a groove going. A lot of her songs have that ear-wormy quality that makes hip-hop so pleasantly addictive.

Most importantly, K. Flay’s lyrics have a sense of humor. Sometimes she’s dishy and confessional, but more often, she’s sarcastic. In “No Duh,” she opts to laugh about the white-girl thing, rather than apologize for it: Bowl of Cheerios gripped in my left hand/Ballin’ like LeBron, but I’m less tan.