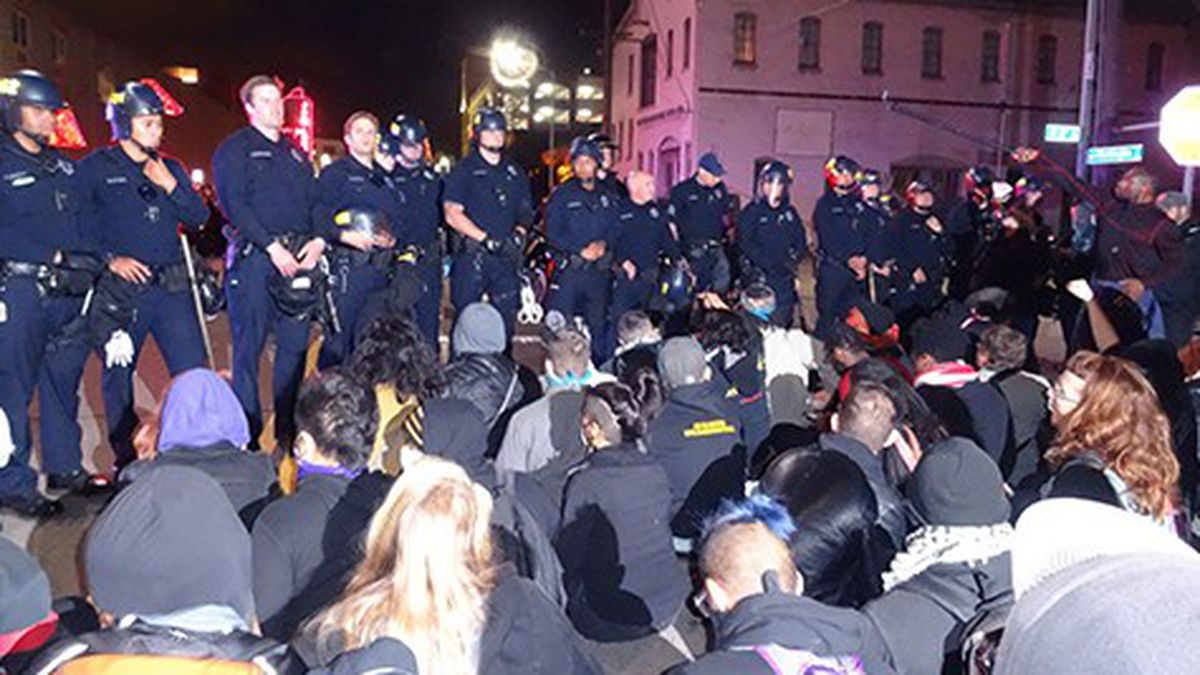 Schaaf’s Priorities Are Out of Whack

Oakland is wasting large sums enforcing the mayor's protest ban at a time when the city has no money to investigate crime or build affordable housing.

During the past few weeks, much of the debate over Mayor Libby Schaaf’s new prohibition on nighttime street protests in Oakland has centered on whether the ban is legal. But at least one aspect of the new policy has been mostly overlooked: It’s costing the city a substantial amount of money in the form of police overtime to enforce it. In fact, there have already been three protests against the ban itself, and if those demonstrations continue throughout the summer as expected, the ban could end up costing the cash-strapped city millions of dollars it doesn’t have. As such, the protest ban, which Schaaf implemented in order to protect windows from being broken during demonstrations, shows that the mayor’s budget priorities are completely out of whack.

How far out of whack? Last week, a new city report stated that through March 31, well before Schaaf rolled out her ban, the Oakland Police Department had spent $7.03 million on police overtime this fiscal year to respond to street protests in the city. OPD estimated that it will spend a total of at least $9.37 million on overtime dealing with protests by the end of this month. That’s a huge amount of money for a city that claims it can’t afford to investigate crime, build affordable housing, or keep its streets paved and parks and libraries open. It’s also reflective of OPD’s practice of responding to protests with massive numbers of cops working overtime.

Indeed, there are often more police officers than protesters during nighttime demonstrations in Oakland. During a protest last Friday night against Schaaf’s ban, reporters on scene estimated that OPD had deployed more than one hundred police officers to enforce the ban against about fifty demonstrators.

Just think about that for a moment: The city plans to spend at least $9.37 million this year in order to keep windows from being smashed on Broadway and Telegraph. It’s an extraordinary misuse of funds.

But for the sake of argument, let’s say that about half of that total — $4.7 million or so — is a legitimate expense, and is needed to prevent full-scale rioting and the looting of businesses when protests get out of hand.

But what about the other $4.7 million? For that amount, Oakland could have employed 26 detectives (at a cost of roughly $180,000 each, including health and medical benefits) to investigate the thousands of homicides, assaults, robberies, and burglaries that go unsolved each year in the city. As we noted in a story last month, OPD has basically given up on investigating most crimes in Oakland, because it says it doesn’t have enough money to hire detectives (see “Why Oakland Police Can’t Solve Crime,” 5/20). Last year, the department chose not to investigate 80 percent of the reported robberies and 97 percent of the burglaries because of a supposed lack of funds.

In other words, a thief can break into your house, ransack it, and steal all of your stuff, or can rob and pistol-whip you on a city street, and the police and the mayor will basically say: “Sorry, but you’re on your own. We don’t have the money to investigate and catch the thief who victimized you.” But if a protester who is upset about police brutality smashes windows at a bank or a car dealership or vandalizes property on Broadway, Schaaf shall spare no expense to make sure it never happens again.

It’s also a strong indicator of the power of the mainstream press and of the mayor’s interest in maintaining appearances rather than solving actual problems. After all, Schaaf instituted her crackdown on protests, effectively authorizing Police Chief Sean Whent to spend whatever amount necessary, after the San Francisco Chronicle ran a series of front-page stories about broken windows and smashed cars in Oakland and about how city leaders had “lost control.”

Of course, there are numerous examples of city leaders having “lost control” of Oakland’s problems — most far more pressing than broken windows. Instead of wasting $4.7 million on policing protests, for example, the city could help build much-needed affordable housing at a time when housing costs are soaring in the East Bay. Or perhaps, the city could pocket the $4.7 million and forgo the $5.1 million it plans to receive for selling public land on Lake Merritt to a luxury-condo developer. Or the city could spend $4.7 million on paving streets and creating bike lanes and pedestrian walkways, or keeping our parks and libraries open, or financing after-school programs for low-income kids, or funding job training for unemployed adults.

Plus, it’s not as if police officers even need or want the OT. In fact, OPD’s rank-and-file hates Schaaf’s protest ban and resents being forced to work overtime to enforce a policy they think is dumb and a waste of resources. Union chief Barry Donelan told the Oakland Tribune last week that the ban is a “failed policy” and a “failure of leadership.”

And enforcement of the protest ban also infringes on the city council’s legal role as fiscal agent of the city. In effect, Schaaf has told Whent that he can ignore the council’s legally adopted budget — in order to enforce her ban. The mayor, in other words, is not only making bad policy, she’s overstepping her authority to do it.