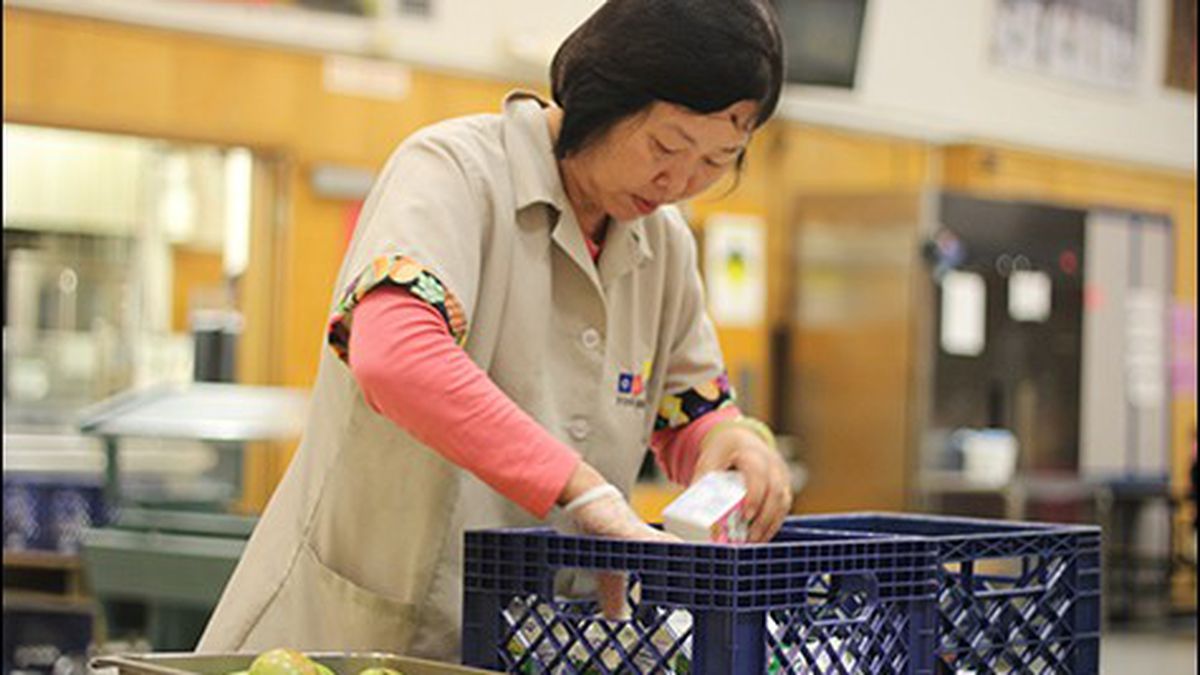 An Oakland school lunch redistribution program keeps food out of the landfill and feeds working class families, one milk carton at a time.

At noon on a recent Tuesday, the school cafeteria that serves both New Highland Academy and RISE Community School in East Oakland was filled with the din of children chatting over meals of salad, chicken and waffles, and whole pears. At the two schools, which share the same campus, 98 percent of the children qualify for free or reduced lunch because of their family’s economic situation, and the vast majority of students are kids of color. The schools also might have one of the greenest lunchrooms in the country.

The cafeteria has a salad bar and uses compostable food trays, and, unlike the majority of schools throughout the country, it takes leftover food and gives it away to parents, grandparents, and caregivers after school.

Nationwide, school cafeterias waste more than $600 million worth of food each year, according to a 2002 USDA report examining “plate waste” — the most recent of such studies. “I imagine that it’s more than that now,” said Kelly ErnstFriedman, program director at Food Shift, an Oakland-based nonprofit that manages a school lunch recovery program with the Oakland Unified School District.

Most extra food produced by schools in the United States ends up in landfills, including whole fruits, hot foods, and unopened milk cartons. That’s because strict federal meal program rules concerning the handling of cafeteria food prohibit schools from giving away most food, even if it’s uneaten or untouched.

For anyone who has ever volunteered or worked at a school lunch, it’s appalling to see just how much food cafeterias throw out every day. Even unopened, unexpired milk is tossed out. And in an effort to avoid cartons going into the landfill, “someone had to open milk cartons and dump it out,” said Nancy Deming, Sustainability Initiatives program manager at OUSD. “It’s become a morale issue.” Custodial staff, teachers, parents, and cafeteria workers would stand over buckets after lunch period, open cartons and pour milk out.

One way to sidestep the conundrum is to donate leftovers to a nonprofit. OUSD, as a result, has partnered with Food Shift, which focuses on reducing food waste, feeding those in need, and creating jobs.

“This is one of the first steps we can take — recovering the food and giving it away,” said ErnstFriedman. Organizations like Food Shift are covered under the federal Bill Emerson Good Samaritan Food Donation Act of 1996, which limits the liability of donating food to nonprofits and those in need.

Yet even though recovering extra food seems easy with the help of a nonprofit, ErnstFriedman said, “there’s shockingly a lot of barriers.” For example, extra food often needs to be stored properly, so food recovery programs need extra space. Thanks to a grant from StopWaste.org, the OUSD-Food Shift program was able to purchase several extra refrigerators and freezers.

Getting schools on board also takes time. Last spring, Food Shift started a pilot program at another elementary school, but the group has not been able to continue the program because of a change in leadership at the school.

Currently, there are very few schools that have any programs in place, although the numbers will likely grow as more administrators decide to reduce waste. “No one wants to see the food go to waste,” ErnstFriedman said, “particularly if they see hungry kids and hungry families in their community.”

Saving food can be as simple as getting a nonprofit to come and pick up leftover food. But to set up a redistribution program in which the schools’ families benefit takes more work. Reducing lunch waste is a school-wide effort that includes the principal, teachers, nutrition and custodial staff, and parent volunteers — and everyone has to buy in to it for it to work. Parent volunteers at New Highland and RISE run the after-school giveaways. “They’re the key,” said Annie Flores, a family resource coordinator through the Lincoln Child Center, who works with parents at the schools. Parents also receive mandatory training on food safety.

Food waste is, of course, not a problem unique to schools. An estimated 40 percent of food is thrown out nationwide, while 47 million Americans are on food stamps. Meanwhile, the price of food continues to rise. This irony is not lost on people struggling to feed their children, especially as federal SNAP (Supplemental Nutrition Assistance Program) benefits, more commonly known as food stamps, are being cut by Congress. “Our community is in great need of food,” Yolanda Magana, a parent volunteer with New Highland Academy, said in Spanish through an interpreter.

Nearly every family at New Highland and RISE relies on CalFresh, California’s version of food stamps, according to Flores. Toward the end of the month, families come to her for food donations. “They’ve run out of money on their benefits card,” Flores explained. “It’s just not enough. If they didn’t subsidize (on the food giveaway program), they would go without.”

During a giveaway on a recent Tuesday after school, one and a half crates of low fat Berkeley Farms milk was gone within five minutes. Many families gladly took what was available. Often, it’s grandparents who are the after-school caregivers.

At these schools, there’s actually less waste than others, according to Deming of OUSD. She credits the food manager, Bo Chee Kwong, who has worked in Oakland school cafeterias for eighteen years. Kwong carefully plans out meals for the 580 of 620 kids who eat school lunch, eliminating potential food waste in the process.

Oakland schools’ waste reduction and nutrition efforts also are not limited to this program. The district has seventeen after-school farmers’ markets that sell affordable and organic produce, its menu includes “Meatless Mondays” every week, and it has a Green Gloves program that reduces landfill waste and teaches children about sorting and composting. The district also has twenty after-school nutrition and cooking classes at elementary schools.

Currently, more than half of district schools participate in Green Gloves, in which waste is sorted into recycle, compost, landfill, and food share bins. School staff, often the custodians, stand next to the cans as a monitor in case a piece of fruit is accidentally thrown in the trash. Children and staff are also taught about what food is salvageable, and sometimes students monitor the bins. “A lot of learning happens in the cafeteria,” Deming said. For example, uneaten fruit, unopened packaged quesadillas, and unopened milk cartons can be placed into the food share bin. If kids are still hungry, they can grab something from the food share bin. This has helped kids understand the choices they make about food, Deming said. But the food share bin is still tossed at the end of the day at most other schools. Two schools, Hoover and Emerson, partner with the Berkeley Drop-In Center to pick up extra food. The food redistribution program, currently only operating at New Highland and RISE, goes a step further by taking what’s still good and giving it away to families.

Food Shift staffers said they hope to be in five more schools by the end of the school year, mostly in East and West Oakland. Nearly 60 percent of children who attend Oakland’s schools qualify for free or reduced lunch. The school board has already approved fifteen other schools to start a similar program. The district is also creating an implementation guide for schools outside of Oakland that want to start a program.

“It’s a wonderful opportunity for parents in the most need, and it reduces waste,” said Lorena Reyes, Assistant Principal at New Highland Academy. “Fruits are expensive,” she added.

One parent volunteer has also experienced an unexpected effect. “I like the program because it gives me an opportunity to have cross-cultural friendships,” Magana said. “Many African-American parents who never spoke to me before are now friends with me.”