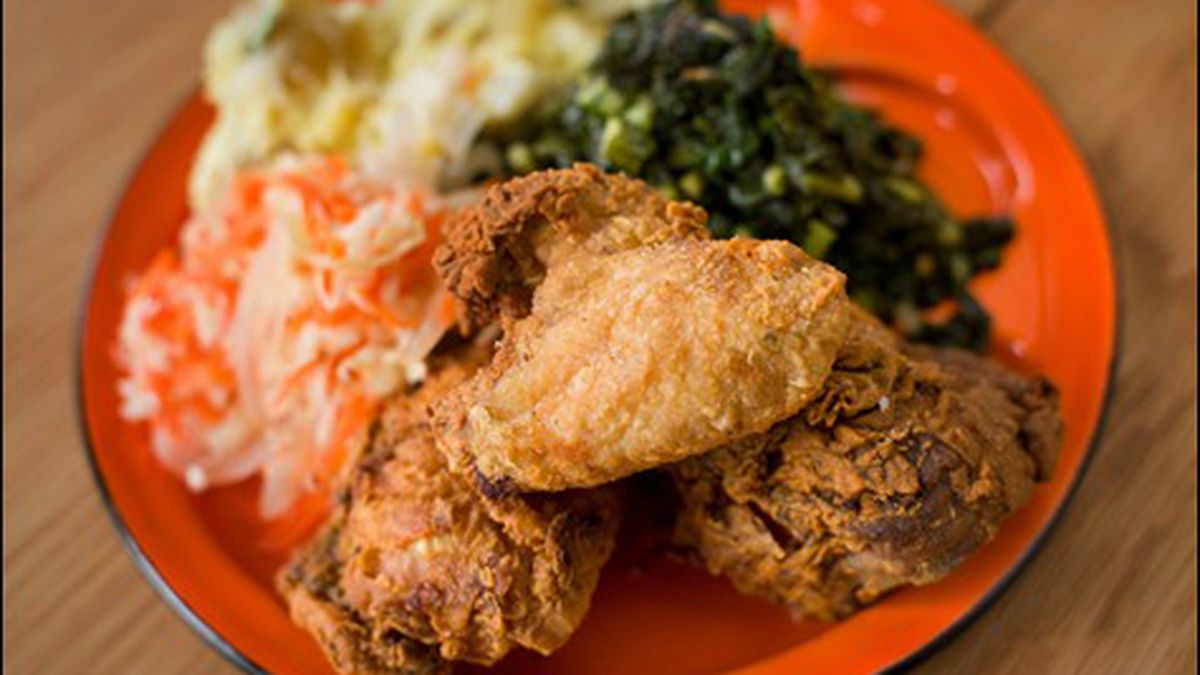 At Miss Ollie's, Afro-Caribbean cooking is more soulful than ever.

In one corner of Miss Ollie’s, Sarah Kirnon’s exciting new Afro-Caribbean restaurant in Old Oakland, a note scrawled on a chalkboard reads, “Food is revolution & our recipes are our weapons” — a chef’s manifesto if there ever was one.

Revolution is a strong word, but you can catch a whiff of it here: in the resurgent interest in long-overlooked dishes of the African diaspora, in the crowd that’s as diverse as any you’ll find in the Bay Area, in the fact that you’ll rarely find an item on the menu priced higher than $11 (and a satisfying meal can be had for around six bucks).

To me, the real revolutionary stroke is this: In Kirnon’s hands, humble dishes like fried chicken, ackee and salt fish, and a simple bowl of sautéed greens achieve a kind of elegance — but not at the expense of the traditional elements that make those dishes so great to begin with.

Too often when international cuisines get reinterpreted through the lens of Californian ingredients, something gets lost in translation — flavors that are too funky for Western palates get toned down, and the food feels overly fancy and fussed over.

Kirnon came to prominence when she was the opening chef at Front Porch, in San Francisco’s Mission district, and then at Uptown’s Hibiscus, where she got raves for her brand of refined, Caribbean-inspired cooking — “California-Caribbean,” as one critic called it.

And it’s true: Kirnon worships at the altar of local and seasonal ingredients as much as anyone. And even the spiciest dishes at Miss Ollie’s won’t burn a hole through your tongue. (The bright-orange habanero sauce the servers kept warning me about? Deliciously zippy, but no more than two alarms.)

But unlike Kirnon’s tenure at Hibiscus, there’s no pretense of fine dining at Miss Ollie’s — no white linens, no composed plates, no dainty frisée salad to garnish your plate of split-pea fritters. It’s the kind of place where you order at the counter and then snag a seat in the sun-soaked dining room, where it’s easy to swing by and pick up a takeout order of greens or rice and peas.

The food is, in its own way, pretty enough for Bon Appétit — especially served, as it is, on brightly colored vintage enamel plates. But the plating is home-style (a mound of rice here, a pile of greens or pickled vegetables there), recalling the soulful, abundant, steaming-hot plates of food someone’s grandmother might serve you — say, Kirnon’s own grandmother, the Barbadian sugar plantation cook who raised her and for whom the restaurant is named.

Most importantly, over the course of several visits, just about everything I ate was delicious.

On a recent Friday, for instance, the daily special was fish blaff, a traditional Barbadian soup that was as indulgent as it was intoxicating: cornmeal porridge (something like grits) came in a fish broth that had been infused with rich, briny sea urchin roe. This was topped with a generous portion of Dungeness crab, mackerel (toothsome and intensely fishy), prawns, and conch. Two bites in, I was swooning.

And while I wished the Wednesday special of curry goat — four or five hunks of flavorful, on-the-bone meat served over coconut rice — was a touch more tender, I appreciated the care put into the vegetables on the plate: pungent, thinly sliced cucumber pickles and whole scallions cooked until soft, smoky, and sweet.

Miss Ollie’s is also the only place I know of in Oakland that regularly serves ackee and salt fish, a kind of savory scramble that constitutes one of the world’s great breakfast dishes. Kirnon makes her own salt cod in-house, then sautées it with aromatics (onions, scallions, red peppers) and ackee, a tropical fruit whose flesh looks, uncannily, like scrambled eggs and tastes like mild green tomato. Thick slices of fried plantain serve as a stiff, starchy, not-too-sweet base for the dish.

Of course, no discussion of Miss Ollie’s would be complete without enumerating the virtues of the fried chicken, Kirnon’s calling card, available for lunch on Tuesdays and Saturdays. An order came with two bone-in pieces, a thigh and half a split breast — the skin cooked crisp to a deep bronze, the juicy flesh a succinct and succulent argument for the power of brining. Kirnon skillet-fries the chicken, which, as many a Southern purist will tell you, is the only honest way to fry a bird. But what really sets this fried chicken apart is something West Indians simply call “seasoning” — a mix of vinegar-soaked herbs (marjoram, thyme, oregano, cloves, and habanero chile) that Kirnon stuffs under the skin and deep inside the meat itself, so it’s as though each piece of chicken has been perfumed with a particularly delicious chimichurri sauce.

I’m wary about throwing around superlatives, but if there’s better fried chicken to be had in the East Bay, I haven’t found it.

Each entrée is a generously portioned one-plate meal, but a variety of sides and appetizers are also available. The best of these is the Trinidadian pholourie, a hushpuppy-like fritter made from split-pea flour that’s laced with charred scallion and served with a zesty green herb dipping sauce. For something lighter, get an order of Kirnon’s excellent collard greens — cut chiffonade, they’re wonderfully delicate and clean-tasting.

The restaurant is waiting on its liquor license, but in the meantime there’s barely-sweet ginger beer on tap (brewed by Linden Street Brewery) and house-made sorrel (a hibiscus-flavored fruit punch), or a half-and-half mix of both. For dessert, the sugar-dusted Creole doughnuts ($1.50 an order) are a steal.

By the time this review hits newsstands, Miss Ollie’s will have launched its dinner menu, which, in addition to crowd-pleasers like the oxtails and the fried chicken, will feature a rotating list of obscure, old-school West Indian specials like steamed blood sausage and a rum-spiked dessert omelette — dishes likely to keep things interesting for that adventurous diner for whom even ackee and salt fish is old hat.