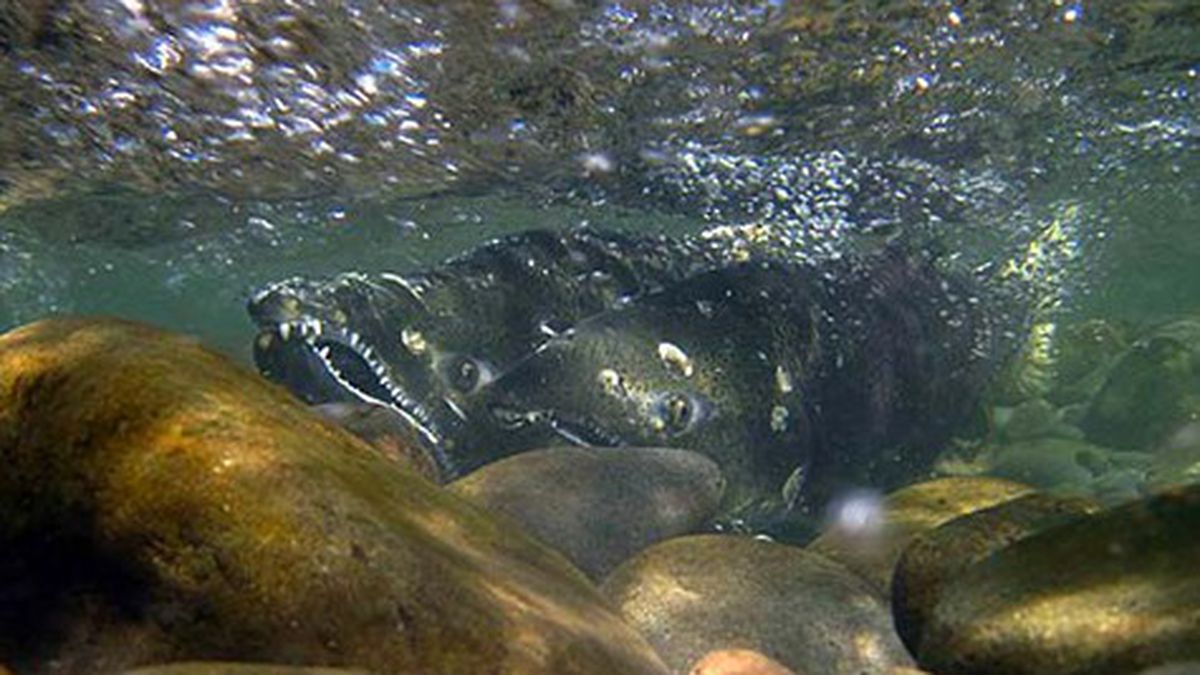 Hundreds of Chinook salmon – perhaps more – have been trapped in the potentially deadly Yolo Bypass this winter because of the drought and government inaction.

It may seem like a miracle that migrating salmon are able to navigate from the ocean, through the bay, and upstream for hundreds of miles through a complex maze of ditches, rivers, canals, and sloughs in the Sacramento Valley in order to spawn in the gravel beds in which they were born. And, in fact, this miracle of nature is becoming even more difficult for salmon because of the drought and government inaction. Currently, many salmon are failing to complete the journey, and are winding up lost in dead-end backwaters. And if they can’t quickly find their way out, the salmon die or become too weak to spawn.

That’s what’s happened to hundreds, maybe more, of Chinook salmon in recent weeks. The fish have been entering a canal system called Yolo Bypass, just northwest of Sacramento, ever since the first heavy rains caused high flows that opened up a passageway into the network of channels. As of mid-December, at least sixty salmon had died after going off course during their migration, according to the Golden Gate Salmon Association, a group that has been working with state officials to relocate the fish to the Sacramento River.

Many of the fish are fall-run salmon. While this population is the most abundant of the Central Valley’s four distinct Chinook runs, poor conditions in the Sacramento River have hindered the fall run’s spawning success in the past two years. Now that rain has fallen, the river is running high and cold — perfect spawning conditions for Chinook.

“This makes the fall-run fish that have arrived later and which are now stuck in Yolo Bypass that much more important,” said Jacob Katz, a biologist with the group California Trout, one of several organizations working onsite to trap and relocate the wayward fish. No one knows how many salmon remain in the canals, but environmental groups and fishery advocates fear the number could be substantial — possibly thousands.

Salmon strandings in the Yolo Bypass are not a new problem. “There are anecdotal stories going back a century of farmers with pitchforks and salmon in the rice paddies,” Katz said. He explained that a low-lying basin just west of the Sacramento River used to fill with water each winter. Early landowners eliminated this flooding pattern by creating a channel from this basin to the canal system just south of it. Now, when heavy rains fall, the water in the so-called Colusa Basin Drain runs southward, into the Yolo Bypass, creating an eighty-mile water flow that eventually exits at the south end of this system, into the Sacramento River near Rio Vista. Adult migrating salmon, swimming against the current, may enter the bypass during high water periods. If the water remains high for weeks, they have a chance of moving through the system and reconnecting with the Sacramento River many miles north, near Knights Landing. If the water level drops while the fish are in the canal system — and it often does — they become stuck there and are unlikely to ever find their way out.

Katz said the issue only first gained significant media attention in spring 2013, when about six hundred endangered winter-run Chinook were discovered in the canal system within a wildlife refuge. The fish had been there for months and were in a weakened state. About half were trapped and released back into the Sacramento River with the hope that they would complete their spawning migration, but it’s unlikely that any did.

This year, as salmon continue to enter the Yolo Bypass, more and more of the fish are believed to be winter-run Chinook, a fact that has commercial fishermen concerned. That’s because fishery management agencies may close or shorten the ocean salmon fishing season this year if biologists estimate a high mortality rate of winter-run Chinook. Chinook salmon of different runs cannot be distinguished from one another by sight, which means that the only way to ensure no winter-run salmon are harvested at sea is to ban salmon fishing altogether. This management strategy has been employed before, putting thousands of fishermen and fish processors temporarily out of work.

Commercial fisherman Mike Hudson of Berkeley pointed out that flaws with inland fishery management tend to go unaddressed while the ocean fishing industry may be shut down entirely if fish numbers decline.

The Yolo Bypass stranding issue should have been resolved years ago. A federal law passed in 2009, with the scientific oversight of the National Marine Fisheries Service, requires officials to correct the problems that make it possible for salmon, as well as other fish, to become stranded in these off-channel waters. However, the California Department of Water Resources and the US Bureau of Reclamation have dodged this responsibility for years.

John McManus, the executive director of the Golden Gate Salmon Association, suspects the reasons for this could be part of a political strategy to facilitate construction of the controversial delta tunnels – the centerpiece of Governor Jerry Brown’s Bay Delta Conservation Plan (BDCP). The plan requires extensive habitat restoration and water quality improvement efforts to offset what are expected to be monumental impacts to the delta ecosystem from the construction of the massive underground tubes, which will be about forty miles long and capable of diverting half or more of the volume of the Sacramento River.

McManus suspects that government agencies may be delaying the Yolo Bypass improvements in order to log the action not as a mandate of existing law but as the first step toward building the tunnels. “If they were to fix the [Yolo Bypass] problem now, it would be more visible to the public that this was part of the 2009 federal law and therefore not eligible for the BDCP requirements,” McManus said.

John Brennan, a rice farmer, has been working with environmental groups to prevent salmon from getting lost in the Colusa Drain and, instead, move them back into the Sacramento River. Brennan is helping state officials operate a simple fish trap placed at a narrow chute connecting the Yolo Bypass to the Colusa Basin Drain. “That’s the narrowest point where the fish have to pass,” Brennan explained. Hundreds of live salmon have already been captured here this fall. However, the trap does not function if the river is at or near flood stage. Thus, during the deluges we had this December, hundreds or thousands of salmon swam north through this pinch point and into the Colusa Basin Drain.

Brennan and others want the state and federal governments to completely barricade this channel to fish and simultaneously reconnect the north end of the Yolo Bypass to the Sacramento River, allowing the salmon to escape and merge back onto their migration route. This would also make the Yolo Bypass a valuable nursery refuge for newly born salmon to utilize as they make their way seaward.

Katz said the status quo of trapping and relocating the adult salmon is nowhere near sufficient. “There’s been so little success relocating the salmon to the river that it really isn’t even a short-term solution,” he said. “It’s barely a Band-Aid.”

Carson Jeffres, a biologist with the UC Davis Center for Watershed Sciences, said modifying the flow regime through the Colusa Basin Drain and the Yolo Bypass to keep salmon from what he calls “the canals of no return” would be a simple fix costing just several million dollars. “That’s a drop in the bucket in the total amount of money spent on helping [salmon],” Jeffres said.