With a private equity firm taking over the East Bay grocery chain, its development plans in North Oakland face new questions and uncertainty. 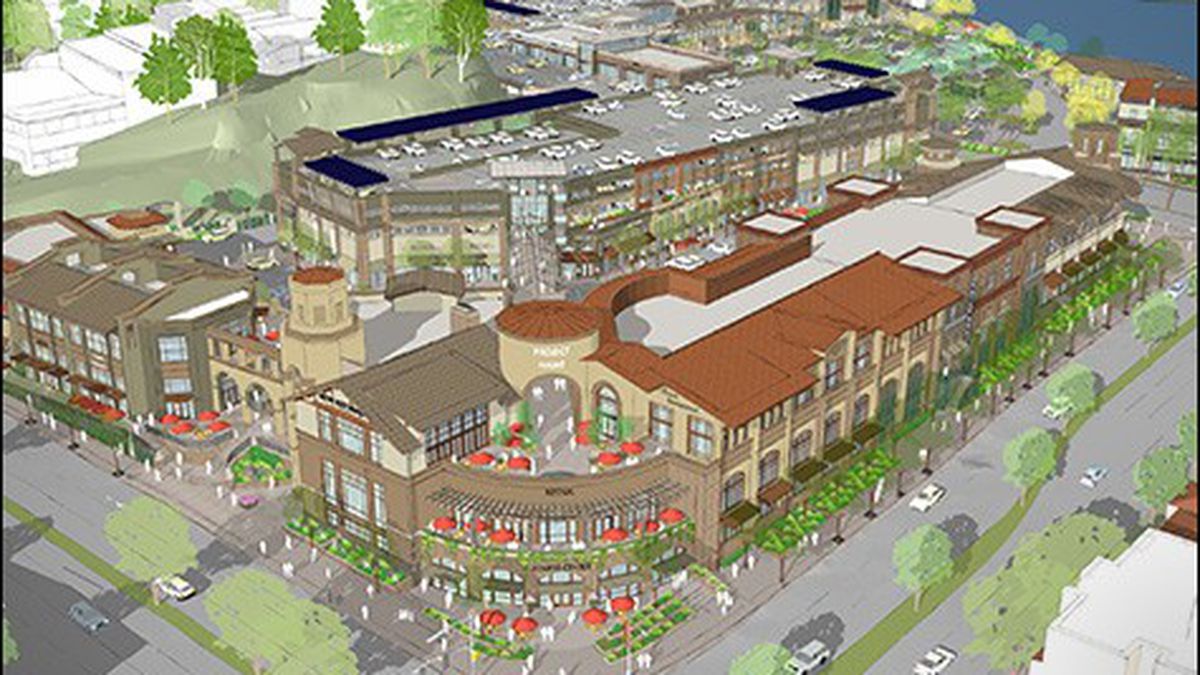 For years, Safeway has pushed forward with two large expansion projects in North Oakland, both of which have made progress in recent months. At the corner of College and Claremont avenues in Rockridge, construction of a new and larger Safeway supermarket and adjacent retail space is now underway, with a scheduled opening this fall. One mile south at the Rockridge Shopping Center at Pleasant Valley and Broadway, a massive redevelopment plan includes the construction of a new Safeway superstore, with the first phase of demolition scheduled to begin this summer.

Both projects, however, could be impacted by the recent news that private equity firm Cerberus Capital Management is purchasing Safeway and merging it with Albertsons, another supermarket chain. The sale has raised questions about the fate of Safeway’s existing stores and ongoing expansion efforts. The future of the Rockridge Shopping Center is especially uncertain, given that Safeway has announced that it also intends to sell off its real-estate affiliate Property Development Centers (PDC), which has overseen this development project since 2008. Simply put, the Rockridge Shopping Center will soon be losing its developer.

And while the College Avenue site is already under construction, its fate, like all of Safeway’s stores, is uncertain, too. Even though officials with Safeway and the city insist that both projects will continue as planned and that no stores will close as result of the buyout, Cerberus, a New York-based hedge fund, has a history of shuttering supermarket stores. Notably, after Cerberus acquired Albertsons in 2006, it closed dozens of outlets. And the firm, experts noted, is driven by profits and has no obligation to ensure the completion of either Safeway store in North Oakland or the larger redevelopment projects they anchor.

“It’s the instability of corporate America, and it can bring a lot of collateral damage,” said Stuart Flashman, a land use attorney and board member of the Rockridge Community Planning Council. “With buyouts and corporate restructurings, you can have areas where something was supposed to happen and it does not. It is the people in the community that end up suffering as a result.”

Flashman and other critics had raised concerns about the coinciding Safeway expansions back in 2011, noting that the two superstores would be competing for the same customers. And after Cerberus closes the merger deal, which is expected later this year, it is likely that Safeway’s new owners will evaluate existing assets and projects and possibly consider shutting down underperforming locations.

These concerns carry the most weight at the Rockridge Shopping Center, because of the developers from the soon-to-be sold PDC have not yet acquired building permits. And any disruption to the project would be a frustrating setback to many local residents, considering that the project has worked its way through the long public review process and undergone significant design revisions since 2009. The current project proposal thus has the support of key neighborhood groups and elected officials. “People are really looking forward to the idea of an upgraded shopping center,” said Valerie Winemiller, a local resident who helped negotiate project changes and community benefits as a member of the Piedmont Avenue Neighborhood Improvement League’s steering committee. “There’s a huge demand for it … and a huge market sitting here waiting.”

Safeway officials said that the company’s local developments are on track and will not be affected by the buyout. “Safeway and PDC are continuing with its Northern California projects on a business as usual basis,” Safeway spokesperson Wendy Gutshall wrote in an email. “We remain very committed to Oakland.” She reiterated that the store on College and Claremont avenues will open later this fall and the project at Pleasant Valley and Broadway “is scheduled to break ground later this summer.”

At the College Avenue site, crews recently began pouring the concrete walls that will eventually form a ramp from College Avenue to a planned parking deck on top of the store. And Safeway, not PDC, is responsible for the construction of this new 45,500-square-foot store, though PDC is overseeing a separate part of the same development — an adjacent 9,500-square-foot retail building, where Claremont and College intersect, which will contain a number of leased shops. The plan is to open the new Safeway and the neighboring retail at the same time this fall. Peterson Vollman, Oakland city planner for this site, also said that the College Avenue project is on track and that he did not think the merger would affect it.

Despite these assurances, the fact remains that PDC projects will eventually have a new developer, and once the merger goes through, Safeway stores will have a new owner. That means the fate of Safeway’s existing outlets and ongoing development projects will be at the discretion of new leadership. According to the March 6 announcement that Cerberus would be purchasing Safeway for more than $9 billion, the merger is expected to close in the fourth quarter of 2014. The timing of the sale of PDC is less clear.

Under the merger agreement, Safeway shareholders will receive $32.50 per share plus an estimated $3.65 per share from the “sale of the assets of real-estate development subsidiary Property Development Centers … comprised of its shopping center portfolio including certain related Safeway stores.” (The $3.65 per share estimate also includes the sale of Safeway’s interests in Casa Ley, a Mexico-based food and merchandise retailer.) As the company explained in its merger notice, “Safeway will soon be initiating a process to sell PDC,” though the terms of the agreement outline scenarios in which PDC is sold both before and after the merger. The release also noted that “There can be no assurances that Safeway will be able to sell either or both of PDC or Casa Ley.”

In an interview, David Zylstra, PDC’s chief operating officer, said that the sale of the subsidiary should not disrupt the Rockridge Shopping Center redevelopment, which he has overseen since 2008. “We are looking forward to getting under construction.” He said that he expects the sale of PDC will likely take place after the project breaks ground this summer. At that point, the new owner would move forward with the Safeway build-out, he said. But, he added of the buyer, “I can’t say today who that is going to be or how they are going to proceed.”

“The new owner, just like any new owner, would be responsible for overseeing the project and they would be the ones to decide how they would go about doing that,” he continued, later noting, “Selling PDC will be a process whereby the highest bidder … that will produce the greatest return for shareholders will be selected.”

Darin Ranelletti, city planner for Rockridge Shopping Center, said of the merger, “At this point, we don’t have any concerns.” The city approvals for the project are tied to the land, not the specific developer, he noted, meaning a new owner could use the existing plans, he said. But because the project is not a public-private partnership, Ranelletti said that Safeway and PDC are not legally obligated to move forward, though he emphasized that the city is hopeful the project will continue on schedule and has received no indication it will not.

Because this project has gone through such an extensive public review process, it would make sense from a political and financial standpoint for the PDC buyer to move forward as planned, some have noted. The project, designed by Oakland-based architecture firm JRDV Urban International, calls for a massive redevelopment of the entire site at Pleasant Valley and Broadway. This includes the demolition of all 185,500 square feet of buildings currently in existence, including the existing Safeway store, followed by the construction of a new Safeway superstore and additional retail, office, and restaurant space, totaling roughly 330,942 square feet of commercial property. The project also includes modifications to surrounding streets.

As the redevelopment process has inched forward in recent years, several stores have left the shopping center, leaving vacancies behind, and a CVS Pharmacy property (on the plot where the new Safeway will be built) has remained partially empty. Some are worried that if the redevelopment plans were stalled or disrupted by the merger or the sale of PDC, this underutilization — which has arguably worsened in anticipation of Safeway’s plans — would persist further.

“It’s really not fulfilling the needs of the community,” Flashman, chair of the Rockridge Community Planning Council’s land use committee, said of the center in its current state. “It’s kind of a sad ghost town.” He added that he fears continued “blight by delayed development.”

Mitchell Marks, a professor at San Francisco State University’s College of Business, noted that after the merger, possible efforts to rethink Safeway’s model, along with a push by Cerberus to maximize profits, could threaten existing stores and ongoing real-estate projects. “One of the weird things about mergers and acquisitions is the deal gets done first and then the buyer thinks about what to do,” he said.

City Councilmember Dan Kalb said that “anytime you have a major sale like this, you always have questions,” but added of the redevelopment plans, “I’m confident that it will still happen.” After years of review, the project “has a lot of community support,” he said, arguing that its continuation is in the best interest of a wide range of stakeholders, including Safeway. Phase one of the development — which involves demolition of the current CVS site and construction of a new Safeway — will launch this summer, Kalb said, adding that he fully expects the second phase, the build-out of the rest of the shopping center, to progress after that.

“Our hope and expectation is that whoever picks up this master lease will see the value in continuing what was already planned and approved,” he said. “Nobody can guarantee what’s going to happen or who is going to make what decision, but there’s no logical reason that whoever picks this up … would not move forward with this project.”