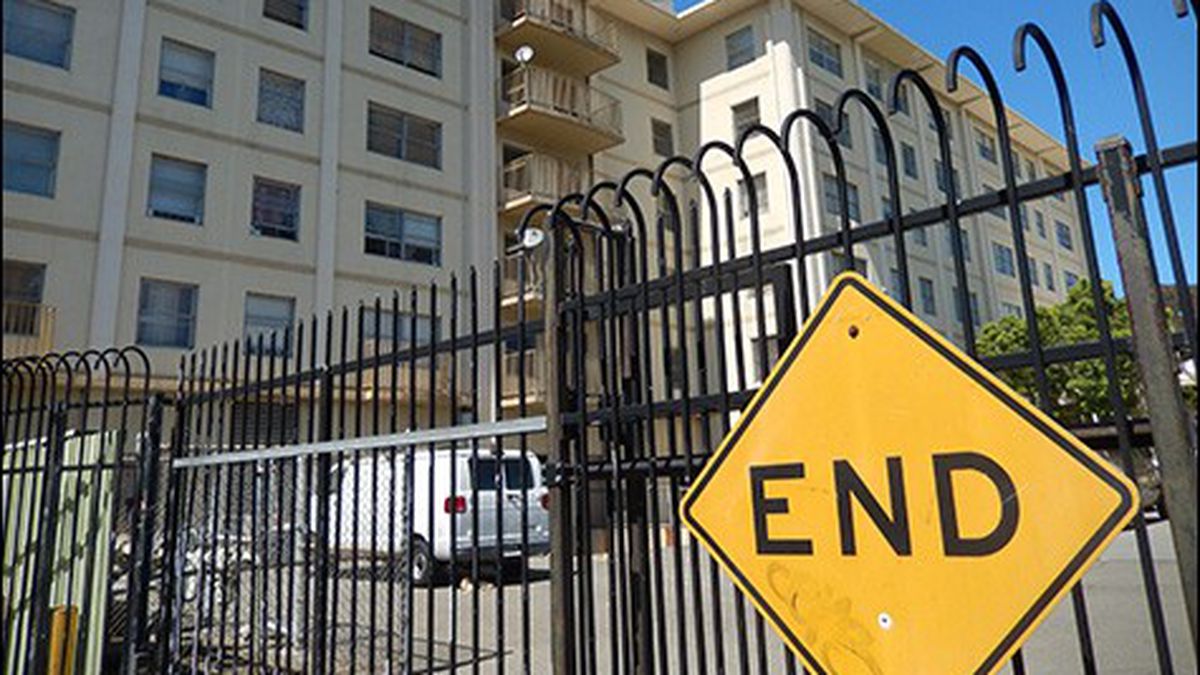 After rushing to adopt a plan that was prompted by a series of controversial news stories, the city council decided to not immediately evacuate the Hacienda apartment complex.

The Richmond City Council stepped back last week from a hasty decision that had been prompted by a series of news exposés that focused intense media scrutiny on the city. Three weeks ago, the council had voted to immediately relocate 130 elderly and disabled residents from the Hacienda, a troubled six-story apartment complex managed by the Richmond Housing Authority. But the plan would have cost the cash-strapped city an estimated $700,000 and put some low-income families at risk of losing their federal Section 8 vouchers, which they rely on to pay rent. Some councilmembers also contended that they decided to reverse course in part because the news stories that provoked their relocation plan contained errors and misrepresentations.

Under the new plan, adopted unanimously by the council last week, the city will ask the US Department of Housing and Urban Development to provide funding for the relocation so that Richmond will not have to slash public services to pay for it. “We needed to make sure the good intentions did not have negative side effects and now we have enough information to where good intentions become good policy,” City Manager Bill Lindsay said in an interview.

Gene Gibson, a spokesperson for the US Department of Housing and Urban Development, also praised the council’s revised decision. “It’s never a good idea to move precipitously because you never know all the ramifications.”

Although some councilmembers and city staffers praised the news stories produced by the Emeryville-based Center for Investigative Reporting (CIR), saying they helped bring much-needed attention to the myriad problems at the Hacienda, they were nonetheless troubled by mistakes in the reports. “The stories brought attention to these issues and we have responded quickly, but I am concerned that they focused only on Richmond and seem reluctant to look at HUD’s role in some of these problems,” said Mayor Gayle McLaughlin. The stories were also published by the San Francisco Chronicle and KQED radio.

No one in Richmond was more upset about the CIR stories than longtime Councilmember Tom Butt, a respected architect who has been the council’s predominant advocate for good government policies for sixteen years. Butt wrote a highly unusual 5,000-word response to the stories and published it in his popular newsletter. In his response, Butt acknowledged problems within the Richmond Housing Authority, but said he was disappointed by the CIR stories and the journalism organization’s refusal to acknowledge some factual errors and misrepresentations in its reports. “I submit that the spate of stories about Richmond are neither fact-based nor truth driven, and it appears the reporter was more after impact that reality,” Butt wrote, adding that he believed the stories were “oriented more toward sensationalism and hyperbole than toward objective reporting.”

In one story, for example, journalist Amy Julia Harris wrote that the Hacienda’s foundation was separating from the complex’s walls and that HUD had given the complex “its most extreme rating on the books” in a 2009 inspection report. As a result of the story, some tenants, especially those who have mobility issues, became worried about the building’s stability and whether they would be able to evacuate in case of an emergency.

Butt, who has extensive experience in forensic architecture, went to the Hacienda and came to the conclusion that the foundation wasn’t separating from the walls, but rather the gaps were related to a functioning expansion joint. In interviews, Harris and her editor, Andrew Donohue, told me that they did not take Butt seriously.

Yet according to HUD, Butt is most likely right. “The HUD Office is not familiar with the specific concerns raised in the 2009 inspection report, but does acknowledge that the councilman has more experience (in his capacity as a design professional and as a RHA [Richmond Housing Authority] board member) and is better suited to respond,” Gibson wrote to me in an email. “We understand that it is normal design and construction practice to use expansion joints as part of a building’s structural design, furthermore, if caulking and/or metal flashing is missing or has failed in these joints, gaps may appear.”

Gibson added that the Hacienda had also passed a HUD physical inspection in 2009 — a fact that Harris did not include in her story. Although I uncovered no evidence that, prior to publishing the stories, CIR knew of Butt’s conclusions about the Hacienda’s foundation not being unsafe, or of HUD’s comments about Butt’s expertise, the news organization has yet to publish a clarification on this issue and has shown no signs that it plans to do so.

Butt also complained that the CIR stories were hyperbolic. Harris, for example, wrote that Richmond Housing Authority Executive Director Tim Jones had inappropriately purchased a number of meals on the authority’s credit card between 2009 and 2011, and wrote that “On a trip to New York in November 2009, Jones got the authority to pay for a $417.34 meal at Fabio Piccolo Fiore, a high-end Italian restaurant.” But city officials say they had informed CIR numerous times that this was not some extravagant night on the town, but rather a working dinner for six people who were preparing a group presentation for a conference that was focused on community organizing in troubled neighborhoods. Donohue, however, told me that CIR would not be publishing a clarification to its report on this issue either. “What is important is that Jones was spending money on expensive meals when the housing agency was in financial trouble,” he said.

Butt also alleged that in the Richmond stories, CIR appeared to care more about having impact than thorough reporting. “I don’t care how many $400 meals Tim Jones eats, it’s not adding up to $16 million in overdue capital projects at the Hacienda,” he said referring to budget cutting by HUD over the years. “Why haven’t they written about that?”

In recent years, nonprofit journalism organizations throughout the country have become increasingly focused on achieving “impact” with their stories — that is, getting results, such as a public agency making an important decision because of a news report. Showing that stories have impact, in turn, can help nonprofits raise more money from their donors. CIR routinely touts the impact of its stories under a heading titled “Impact” on its website and through promotion via social media outlets. It also should be noted that the Center for Investigative Reporting is one of the most respected news organizations in the country.

In one of her stories, Harris also wrote incorrectly that the Richmond Housing Authority oversees 715 housing units. City officials said they repeatedly informed CIR that the correct number of units is 550. Harris had wrongly added to the total 165 units at Richmond Village, a complex managed by McCormack Baron and Salazar, a for-profit developer that specializes in low-income housing. But as of early this week, Donohue had refused to correct this error as well.

The CIR’s stories on Richmond also appear to be a classic example of what journalists sometimes call a “parachute job,” in which a reporter shows up to do a story but has little or no knowledge of the local community. Harris, for example, did not frame her stories in the context of Richmond’s remarkable progress in recent years. Since City Manager Bill Lindsay took over leadership of Richmond’s administration, city government has become much more open and transparent, violent crime has dropped dramatically, and neighborhoods and parks have been revitalized. The changes have attracted new businesses that are bringing jobs and badly needed revenue to the city.

Some councilmembers also said they were disappointed by the stories’ “Richmond-only” focus. Harris wrote, sometimes dramatically, about problems at the Hacienda with mice, cockroaches, and mold. However, she failed to acknowledge that such problems are not uncommon within the 4,055 housing agencies that HUD oversees nationally, and that they are often caused by tenants. “Richmond is not unique in having these problems,” Gibson said. “Any time you have large numbers of people congregating in a living area, you can have problems with bugs. It can be difficult to fix these issues because you have to spray an entire building, you can’t miss one unit, and sometimes there are a few residents who won’t allow you into their units, which I think has been the case at the Hacienda.”

Butt also questioned the stories’ newsworthiness and perspective. The central theme of the CIR stories was based on a 2012 HUD memorandum. In the fourteen-page memorandum, HUD chastised Jones for substandard financial practices, procurement mistakes, and an inability to submit paperwork in a timely manner. According to the report, the problems were preventing the agency from paying a $7 million debt and removing itself from HUD’s “troubled list.” But the agency has been on the list since 2006 for problems that dated back to long before Jones took over the housing agency.

HUD followed the 2012 report with a recovery plan that was adopted by the city council in 2013. Since then, Jones has made progress, according to city officials and HUD. Financial reports are now submitted on time and the housing authority is no longer adding to its debt. Furthermore, there is a plan in place to retire the agency’s debt by selling a 400-unit apartment complex for an estimated $40 million.

“Things were left sitting idle for too long and no one was stepping in with innovative ideas about fixing things,” said Gibson. She added that the Richmond Housing Authority has improved. “They are moving in the right direction as far as submitting reports and budgets. HUD does not expect the fixes to be like snapping your fingers. Nobody expects to see this thing fixed in six months.”

Under the council’s revised plan, the housing authority will submit what’s known as an inventory removal application to HUD. The city hopes that HUD will provide relocation funding and supply additional section 8 vouchers. By following HUD and state protocols for relocating the residents, the housing authority also can assure that a small percentage of residents won’t be left in a half-occupied building, which could attract criminal activity.

Correction: The original version of this report misstated the number of affordable housing units that CIR attributed to Richmond Village — it was 165, not 65.

Best Use of Junk Food in a Recipe