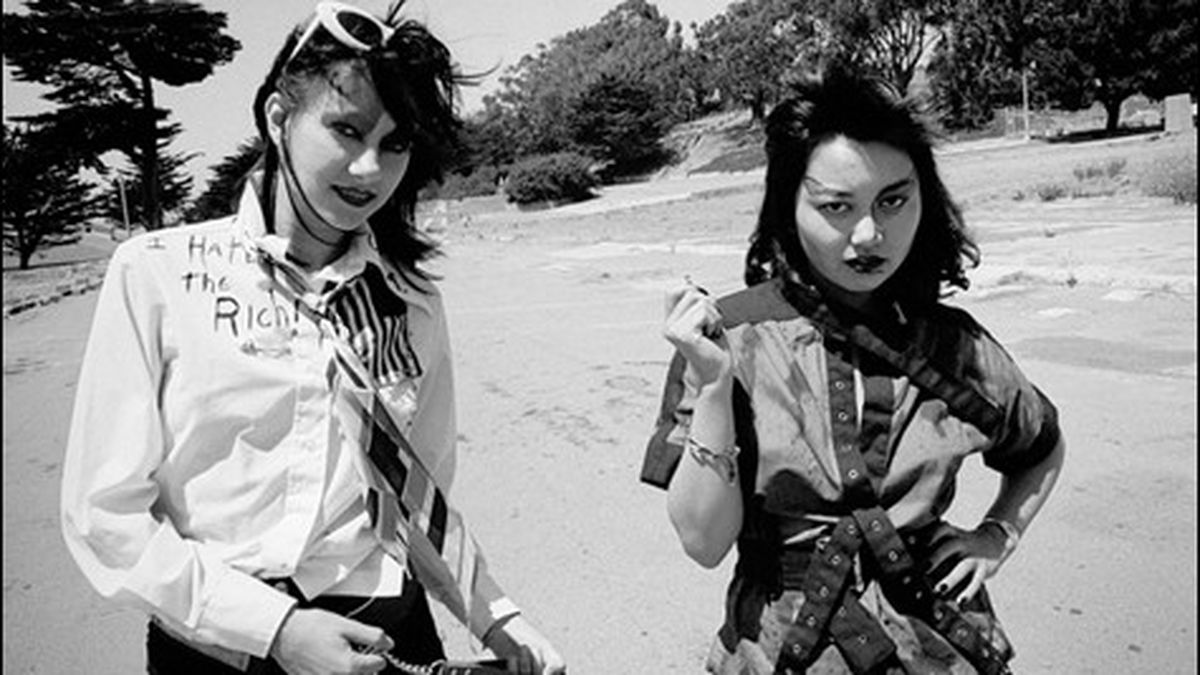 Photographer Ruby Ray documented the San Francisco punk scene in the late Seventies. Three decades later, her work is finally being released in a new book.

When Ruby Ray landed her first photography gig, it changed her life forever. It was 1977 and Ray was working at Tower Records in North Beach. On many occasions, she had noticed a guy in the neighborhood who looked, she said recently, “interesting.” When he walked into the record store one day with a copy of the punk fanzine Search & Destroy under his arm, Ray chased after him and asked, “Who are you?” It turned out he was V. Vale, the editor of Search & Destroy, and he gave Ray her first assignment photographing one of her favorite bands, The Dils.

Ray recently recalled the story in her San Francisco Chinatown apartment. It reflects the tenacity that’s marked her long career.

When Ray started shooting for Search & Destroy, she didn’t consider herself a punk or even a photojournalist, but she felt the rumblings of something happening and wanted to be part of it. Her timing was perfect. She ended up documenting San Francisco’s first wave of underground punk rock, from 1977 to 1981. Those photos are collected in a new book, From the Edge of the World, which is being published by local record label Superior Viaduct. Ray will appear at Stranded Records in Oakland on Sunday, June 30, to promote the book, and will include live performances by Penelope Houston of The Avengers (one of many artists who appears in her book) and X’s John Doe. Levi’s will display photos from the book during the month of July on a barricade at Fourth and Market streets in San Francisco, where it is moving its flagship store.

Ray came from a conservative family in upstate New York and moved to San Francisco in 1974. She picked up a camera at the urging of her friends, who thought her sharp attention to detail would make her a natural. “I got good fast,” Ray recalled.

By the late Seventies, all the bands that called for social change during the Summer of Love were long dead or gone: “The punks were like, ‘How come there was all this great music and now it’s The Eagles and Linda Ronstadt?’

“We were young and starting to find out that we didn’t know the truth about the world,” Ray continued. “Politics were a mess. It was a bunch of lies. We wanted to mock it with black humor.”

Bands in San Francisco were inspired by the early punk coming out of England, Ray said: “We had heard the Sex Pistols. It was energetic. You started dancing and they started a class war. They really messed with people’s minds.” In New York City, the CBGB scene was already well established. “New York was very star-driven,” Ray said. “Patti Smith, Richard Hell, Tom Verlaine — everyone knew their names.”

Ray spent her nights taking photos at punk’s early epicenter, North Beach venue Mabuhay Gardens. “It changed week-to-week. People were constantly starting bands,” Ray said. The Mabuhay stage was only raised about a foot above the floor and Ray said she was careful to stay unobtrusive: “I had to be nonchalant if I wanted to be a part of it.”

The punks looked different and demanded attention: The band Crime wore police uniforms to make a statement about questioning authority; DEVO performed in Booji Boy mask and jumpsuits; members of Factrix wore vintage suits. “If you think about the hippies, punks wearing black ties and suits really stood out,” Ray said. In the early days at Mabuhay, there was conflict between the new and old San Francisco countercultures. “The punks stood at the front of the stage and the long hairs in the back would yell, ‘Sit down!,'” Ray said, grinning. “We’d yell back, ‘Cut your hair!'”

Although the music spanned the gamut of punk, Ray said it was united by “the ability to constantly create something out of nothing. It was about being free,” she said.

Ray, who sits on the committee that organized last year’s SF Punk Reunion, said that underage kids would regularly sneak into Mabuhay. “I talk to people who snuck in once or twice. They say it altered their entire life and I believe it — it altered my life,” Ray said.

Though new venues emerged, by the early Eighties, the punk scene had started to deteriorate. “It never got huge before it was over,” Ray said. “SF did not support the punk scene: No one played them on the radio, no mainstream publications covered them.”

Few bands had an opportunity to record, which also limited their exposure. “It was such a live experience,” Ray said. “It doesn’t always translate so well to recording.” Drug abuse also took its toll. From the Edge of the World includes images of a strung-out Sid Vicious, hanging out at Mabuhay the night after The Sex Pistols’ final performance at Winterland Ballroom; Darby Crash of LA band The Germs, who died of a heroin overdose; and Ricky Williams, the original drummer for Crime and vocalist for Flipper and The Sleepers, who also died of a heroin overdose.

Ray moved to New York City in the early Eighties and her work collected dust. Much like the music itself, the photos were irrelevant to those who weren’t there to witness it. “No one wanted to see them,” Ray said. “No one cared.” Ray helped create multimedia live shows for psychedelic band Saqqara Dogs and didn’t think much about the photos until 2000, after she had moved back to San Francisco and someone asked to look at them. He suggested she publish a book, so Ray set out to find a publisher.

Ray spent eight years shopping the book with no luck. When a friend proposed she show the photos at the San Francisco Public Library, Ray scoffed at the idea at first. But, as it turned out, administrators at the library did understand the cultural significance of her images. Ten thousand people ended up visiting the show in its three-month run in late 2009. That ultimately attracted the attention of Superior Viaduct owner Steve Viaduct.

From the Edge of the World is the first book published by the music label, but it’s a perfect home for Ray’s images. Superior Viaduct has reissued albums by many of the bands Ray photographed, including The Sleepers, Factrix, and Noh Mercy. As the book’s editor, Viaduct selected 250 images and enlisted British rock critic Jon Savage to write the foreward. Savage called Ray’s photos “a record of a lost moment that is finally receiving the attention that it was always due.” The hardcover book, priced at $20, also includes a CD that features music by artists in the book. Ray said all the bands signed off without any question: “I have good karma, I guess.” But more than that, they may sense her reverence for the music even to this day. “These are still my favorite bands,” Ray said. “We had such an incredible scene.”