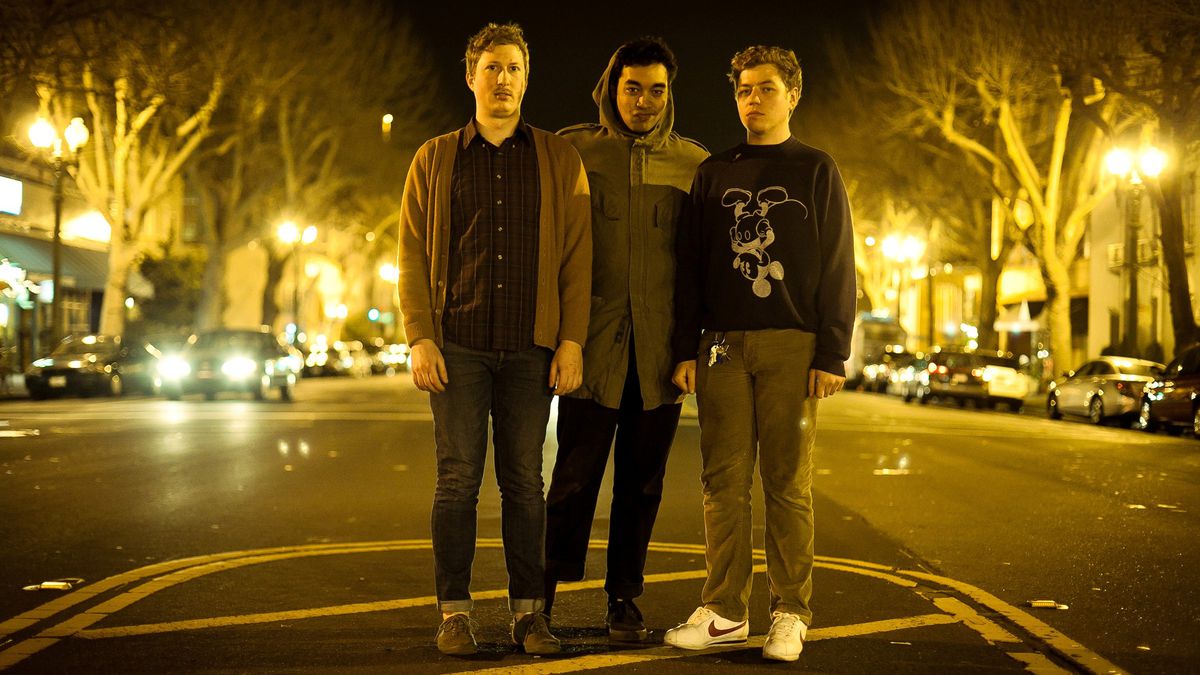 Roughly a year has passed since the genesis of Twin Steps, an Oakland garage trio that describes itself as both “difficult punk” and “romantic shred.” In that time, the three band members have cut a four-song EP called Serial Parade, created a Tumblr page with a garish fast-food motif, and amassed a fairly large fanbase — as was apparent last weekend when Twin Steps played an art opening at Old Crow Tattoo & Gallery by Lake Merritt. The space, which also serves as a tattoo parlor, wasn’t exactly conducive to playing live music — singer Drew Pearson and guitarist Jonathan Reddick had to set up their gear amid vinyl chairs and medical supply cabinets, and convert a bass amp into a PA — but fans clamored in anyway. By 10:30 p.m. the gallery felt as cramped and clammy as any warehouse, as a crowd pressed in around the band. Girls wore torn jeans and ballet slippers; the guys wore plaid. Pearson listed toward fans as he screamed indecipherable lyrics into a microphone. As performance art, it had the same slovenliness and immediacy of any show at 924 Gilman.

It’s only behind the scenes that the “difficult” aspects of Twin Steps shine through. In reality, the band relies on a carefully plotted-out concept, which Pearson and Reddick divined when they first met a year and a half ago. Reddick was hosting a bonfire at his house, and Pearson arrived with a mutual friend. The two of them had a random conversation about using samples in rock music, the same way that Wu-Tang uses old soul, Reddick said. At that time Pearson was working on a heavily sample-based solo project, and Reddick, who used to play in the surf-rock group Summer Blondes, was also trying to go it alone. The two things seemed to complement each other, Reddick said, and the addition of drummer Nick Cowman was enough to form a bona fide band.

The resulting music has a deceptively improvisatory quality, but in reality, it’s carefully crafted and pre-packaged. “Any show we play you could sync it to the record,” he said matter-of-factly. “We’re pretty much playing to a metronome that’s not there.”

Take the song “Pinky Promise,” which gives the illusion of a much bigger band. Reddick handles the guitar parts while Cowman supplies a snare and high hat; keyboard chords, extra percussion, and a looped “ah” fill out the background. (The “ah” sounds like a glottal stop that Pearson filched and isolated.) Or take the song “Wave of My Emotion,” a surf ballad with two interwoven guitar riffs, and what sounds like a children’s chorus in the background. (Pearson said he lifted a vocal part from Connie Francis’ “Lipstick on Your Collar,” and used pitch-shifting software to modulate the sound.) Because samples are so omnipresent in Twin Steps’ music, it’s often difficult to discern what’s pilfered and what’s composed. In that sense, it’s almost more appropriate to describe Pearson and Reddick as pastiche artists than as songwriters.

And the band members don’t reject that terminology; if anything, they embrace it. Reddick taught himself to play bass in fifth grade, and never took formal lessons; he prides himself more on having good taste and a well-developed ear than on being a masterful technician. Both he and Pearson are voracious consumers of old music, with vast iTunes libraries and moderate record collections to supplement them. Reddick says he was listening to Operation Ivy, Nirvana, De La Soul, and the Pixies as early as third grade, just by aping the tastes of his four older brothers. In essence, the band members came up in a generation that challenged old notions of artistry and authenticity. Reddick argued that once you warp a sample far enough beyond recognition, it becomes your own. The provenance is no longer important.

“We look for this one cool thing that’s going on it a very small section of a song,” he explained. “Usually it’s the bridge or the intro, or some part that’s overlooked. … That, to me, is kind of romantic.”

Using that methodology, the band produces songs that sound almost criminally polished. Each guitar line glistens; each trill or tremulo sounds crisp and exacting; some tracks interweave organ, saxophone, and a thick quilting of backup vocals with Reddick’s cleanly arpeggiated guitar. The band’s live show is pretty involved, too, given the amount of subterfuge required to turn a power trio into a wall of sound. At Saturday’s show, Reddick set up his pedals so that he could shift from high melodic leads to low bass parts on guitar; Pearson played a baritone guitar to fill in the gaps. He also brought an old-school tape recorder and cassettes, to play sound collages between songs. The resulting hodge-podge belied the cleanness and sharp edges of Twin Steps’ recordings, but it spoke to the band’s maximalist sensibility.

Pearson, who came up playing in punk and noise bands in his hometown of Redondo Beach, prides himself in having an ear for the music in everyday environments. He often carries a portable cassette recorder and microphone in order to do field recordings, parts of which appear in Twin Steps’ music. He says he became enamored of the “found sound” format after buying his first sampler a few years ago. “I got sick and tired of the snare of a drum sounding like a snare, the bass drum sounding like a bass, the cymbal sounding like a cymbal,” Pearson said. “You get a sampler, you could record a bus driving down the street, and that could be the cymbal. “You could record you slamming a door, that could be the bass drum.”

To him and Reddick, the possibilities seem infinite, and Twin Steps is only scraping the surface of what it could ultimately do. But Serial Parade gives a sense of where it might be headed. “Pinky Promise,” for instance, is a love ballad that devolves into sonic mush — babies laughing, birds, gurgling, and a crackle of feedback, all of it held together by Reddick’s rumbly guitar. Listen to it on Twin Steps’ Bandcamp page, and you’ll get a sense of how each piece fits together; listen to it executed live, and you’ll think the band is intentionally disorienting its audience.

At Old Crow that didn’t matter so much. Pearson’s voice nearly drowned in the murk of two guitars, a tinny sound system, and a crowd big enough to pack two rooms of an art gallery. Fans formed a mosh pit around him, and he writhed around stage like a born rock star. The only thing differentiating Twin Steps’ performance from traditional punk rock was the extra gear; Pearson had a sampler and a slew of cables behind him, and in between songs he would go back and twist knobs, allowing weird ambient noises to reverberate through the speakers. But even if the experience was mediated by sampler technology, it was hard to tell.