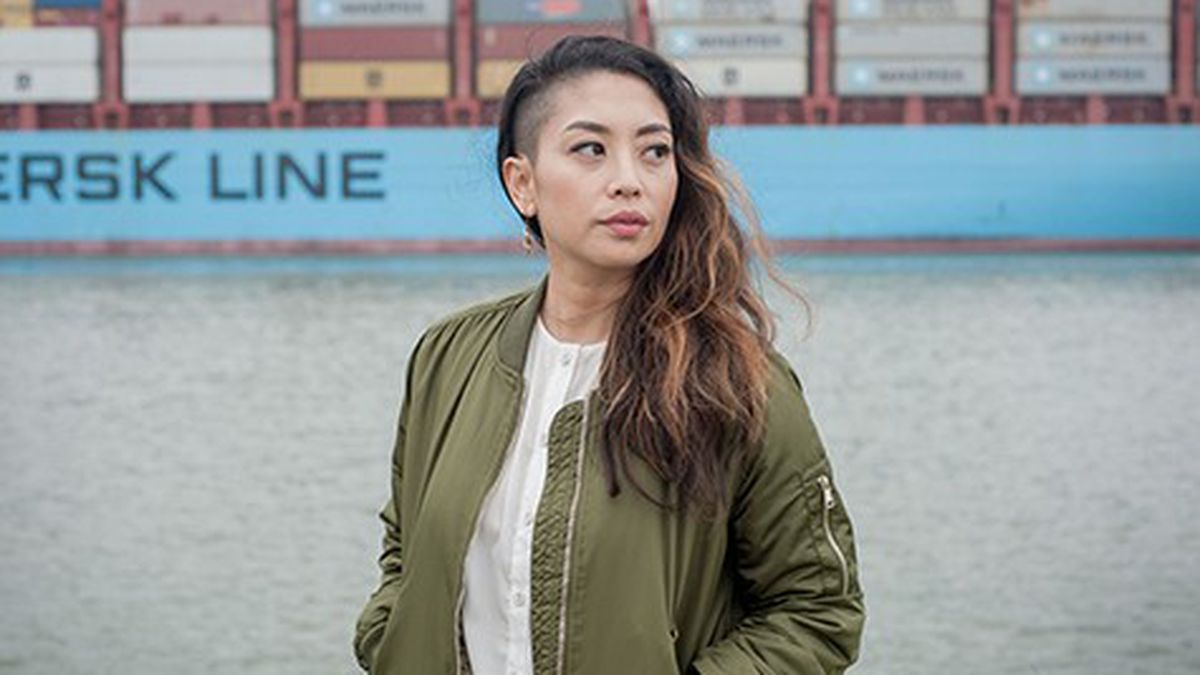 Rocky Rivera on Rapping Her Way into Pinay Warriorhood

After asking Rocky Rivera to give me a taste of her life, I found myself standing beside her at a Black Lives Matter rally at Oakland Technical High School. She chanted along with the crowd and cheered for the action’s leader, Kaylen Scott — one of the many high school students she mentors at her day job. When she’s not rapping as Rocky Rivera, she’s Krishtine de Leon, leader of an after-school program dedicated to fostering youth organizing and activism.

After the rally, she gave Scott a hug and affirmed the young activist. “What you did today was hella important. You interrupted the silence and that’s what we need out here.”

I couldn’t have made up a more fitting scenario for my first meeting with the San Francisco MC. The moment was a powerful display of her commitment to Black and brown solidarity and community empowerment — the same values she embodies in her music.

Whether addressing industry sexism or systematic oppression, the Filipina-American rapper uses her music to engage listeners in critical dialog while deploying expert flows over infectious beats. Rivera rocks hyped-up, bass-heavy tempos with an I-don’t-give-a-fuck swagger and clever bars that are unmistakably Bay Area.

Growing up during a time where female MCs like Lauryn Hill, Queen Latifah, and Yo-Yo were using their music as a platform to empower young women, Rivera recognized rap as the best language for her message. Politicizing her music was a natural choice that came, in part, from her ethnic studies coursework at San Francisco State University.

At State, Rivera majored in journalism. Prior to pursuing music, she was an accomplished writer whose interviews with the likes of Wu Tang Clan, DMX, and Gnarls Barkley appeared in Rolling Stone, The Source, and XXL.

With her popular singles “Pussy Kills” and “Turn You,” Rivera champions her Girl Gang, as she calls her squad — and she seeks to empower women everywhere. She explained that one of her goals is to combat industry misogyny. She wants to show listeners that female rappers aren’t just a novelty, and that women have the right to take space in hip-hop culture.

“When I’m on stage, am I challenging your notion of what an MC looks or sounds like?” she asked herself. “If so, then I’m doing my part in broadening your perspective of what an MC could be. Not a female MC. An MC.”

As a Filipina American, Rivera also feels a sense of responsibility to improve Asian American representation in the media, starting with her own culture. She wants to erase the stereotype that Filipinos passively accept our role as servants to our oppressors. (Prime example: Due to public pressure, NBC recently cancelled Mail Order Family, a sitcom about a white widower who purchases a mail-order bride from the Philippines). Rivera is taking back the narrative and invoking the warrior spirit of Filipino resistance groups such as the Katipunan and Hukbalahap, who fought against colonization and subjugation by the Spanish and Japanese respectively.

“As one of the first Pinay MCs, I didn’t want to be a caricature,” she said. “I really had to give something that Filipinos could be proud of. I didn’t want to represent a message that I didn’t feel like could further the progress of our people.”

Rivera was excited about her latest work and upcoming projects. She released her new single “Busy Gyal” last month under Far East Movement’s label, Brednbutter. A departure from her usual sound, “Busy Gyal” is a fast-paced EDM track that combines Rivera’s lyrical prowess with bass-heavy, pounding jungle terror production by Perk Pietrek, a DJ based in Singapore.

Rivera is also currently in the early stages of writing her book, which will detail her experiences as a woman in the hip-hop industry. She said she hopes her story will spark conversations that will lead to a better, more inclusive industry culture. Although the book commemorates her legacy as an artist, she’s far from finished when it comes to making music.

“I’m constantly pushing myself as an artist, activist and as a woman,” she said. “As long as there is headway to be made, as long as I’m breathing, I’m going to continue to make art and challenge the status quo.”