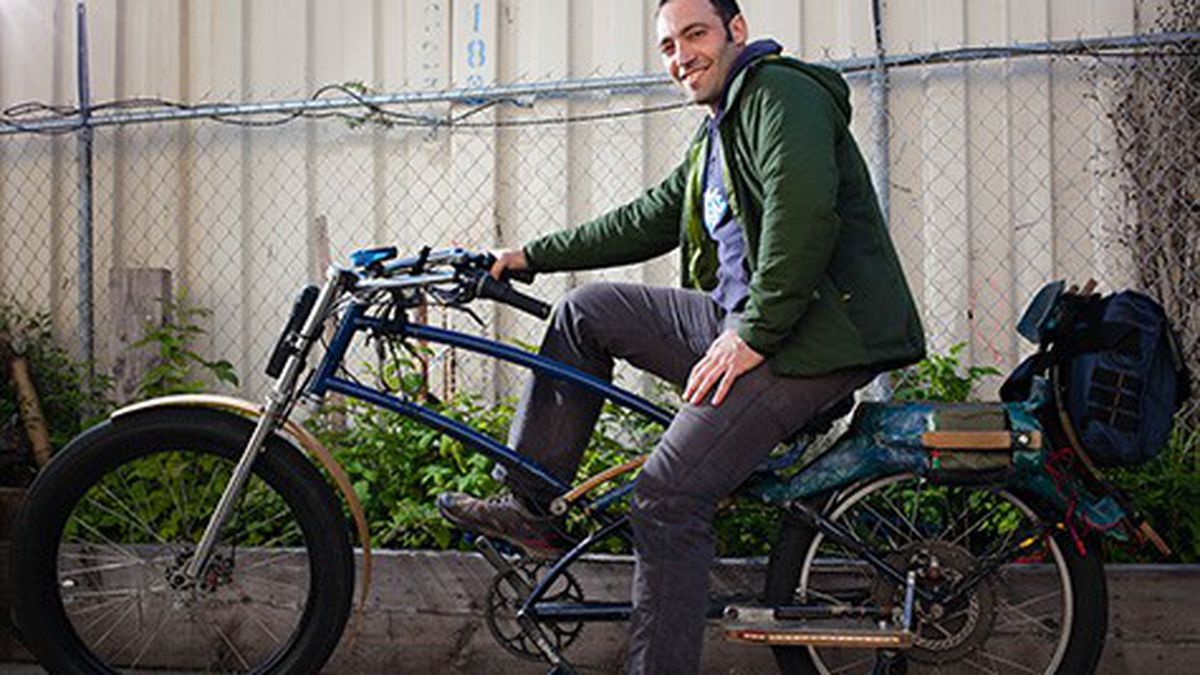 Rock the Bike is Greening the Festival Experience

While the term “people power” might conjure images of protests, Paul Freedman — a local activist, inventor, and entrepreneur — uses the term in a more literal sense. To him, “people power” refers to what activates his bike-powered sound systems at events: sheer human strength.

With the help of colleagues, Freedman engineered his first bike-powered sound system in 2006. And though he doesn’t claim to be the originator of the technology, his Oakland company, Rock the Bike, is arguably the nation’s most prolific producer of bike-powered concerts.

Many of Freedman’s events are environmentally focused, but his bike-powered sound systems aren’t just a gimmick to promote the ethos of a green lifestyle. Indeed, they are actually more fuel-efficient than their traditional, generator-powered counterparts, Freedman said in a recent interview. Thanks to a feature on his bikes that lets riders know whether they’re pedaling too slowly (generating too little power) or too fast (overloading the system), each individual is able to adjust his or her pedaling rate so that the system uses only as much fuel as needed.

Compare that to typical sound systems at outdoor festivals, which waste diesel to ensure that there are no outages, Freedman explained. “We’re tapping into twenty or thirty brains at once and getting them to use their supercomputing powers to keep our system running stable,” he said. “So we actually have a really smart, distributed computer that runs the power grid at our pedal-powered stage, which is pretty much the opposite of what the industry standard is. … The only way they’re going to guarantee a show like Outside Lands is going to stay up is if the power system is way too big.”

Rock the Bike’s pedal-powered sound systems are also designed so that transporting one doesn’t require a car. Their parts can be broken down to small loads that are easy to take on a bike, and Freedman and his team will typically bike up to five miles to an event with their equipment in tow — with the exception of the stage, which is typically too heavy to move without a truck. They only rely on motor vehicles when absolutely necessary.

In 2007, Freedman teamed up with fellow cyclist and musician Gabe Dominguez to organize the first Bicycle Music Festival in San Francisco, and it has since grown into a popular annual event. The September 2015 BMF was the first East Bay edition and one of Rock the Bike’s most ambitious fests yet: The event coincided with the City of Oakland-sponsored neighborhood celebration, Love Our Lake Day, and doubled as a climate justice rally and traveling concert.

The event began at the Lake Merritt Amphitheater and featured an eclectic lineup that included the popular, local New Orleans-style jazz band MJ’s Brass Boppers and the roots reggae group Black Nature Band. Then, it went mobile, with art rockers Major Powers & the Lo-Fi Symphony rolling across town on a stage that cyclists towed behind them, with the audience biking alongside the band. Finally, the show landed at the anti-capitalist community center Omni Commons, where it continued with another set by acclaimed local indie rock act Waterstrider, among other performers.

Freedman said that not only are bike-powered sound systems greener: They also encourage audience participation and provide more ways for people to have fun. A sound system at a Rock the Bike event typically has around thirty bikes powering it, and is designed so that it can accommodate riders of varying skill levels — including kids, elders, and folks with disabilities. Each rider, Freedman said, usually pedals for about two songs (though there’s no official time limit), and participants often tell him that they gain a sense of satisfaction from knowing that they helped contribute to the collective experience.

“We set up a system that is rewarding,” he enthused. “You feel like, ‘Wow, my pedaling did something. Only ten or twenty of us made that much sound? My body is awesome.'”

While Rock the Bike certainly has a captive audience in environmentalist circles, Freedman said that his goal is to compete with other local production companies for doing sound at mainstream events. Indeed, Rock the Bike already has some major happenings on its schedule: Next, they’ll be at the technology festival Maker Faire in San Mateo, where they’ll be powering the main music stage on May 21 and 22.

Largely thanks to Freedman’s efforts, pedal-powered stages seem to be catching on with the general public, which bodes for a greener future for festivals in the Bay Area and beyond.