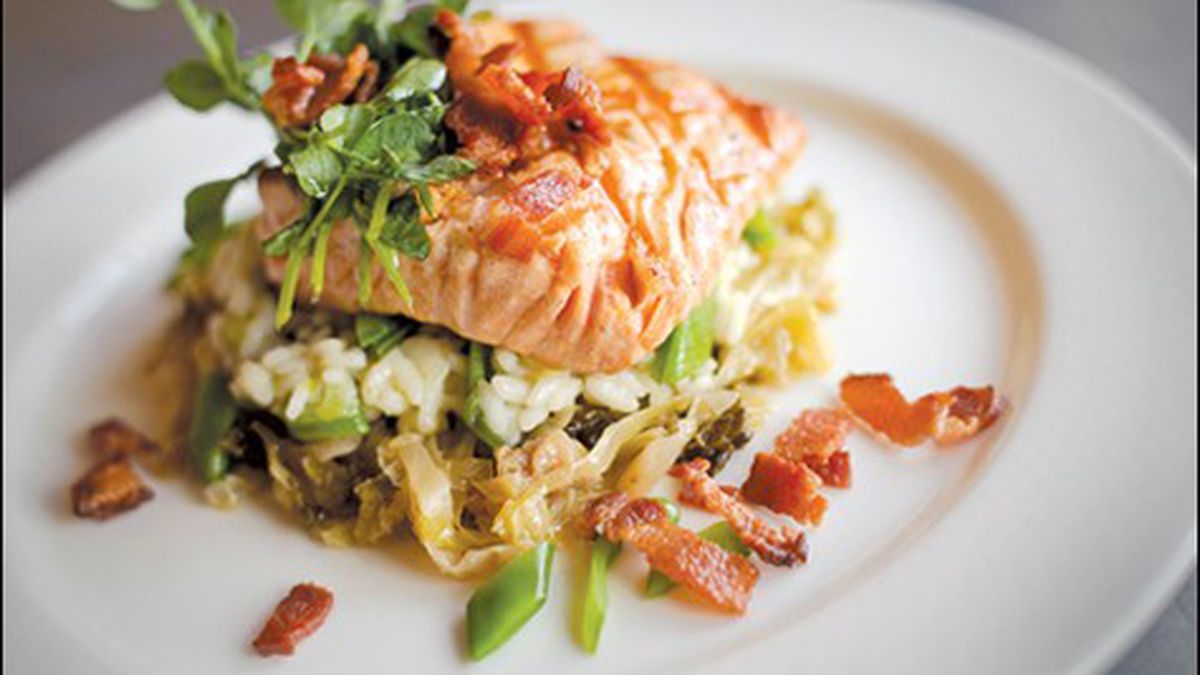 Rivoli May Be Mature, But It’s Not Boring

After a decade and a half, Rivoli still does California cuisine right.

Sixteen years after it first opened, Rivoli remains one of the essential purveyors of that homegrown hybrid known as California cuisine. Chef/owner Wendy Brucker has spent the past decade and a half concocting inventive variations on Cal-Med cooking, in which fresh and seasonal ingredients associated with the Mediterranean Basin — olives, basil, pine nuts, anchovies, lamb, fennel, mint, garlic — are combined in exciting new ways that stimulate the appetite while letting each individual flavor shine. At her trim, tranquil Berkeley showplace (just a mile or so from the movement’s cradle, Chez Panisse), Brucker presents a menu that changes every three weeks to reflect the season’s bounty and to keep the kitchen from slipping into the routine or expected. And although some of the kitchen’s more complex taste-texture combinations are less focused than they could be, the place is still a destination for any dues-paid Bay Area food-lover.

Brucker and co-owner/general manager Roscoe Skipper opened the place after stints at locally legendary hot spots such as Ernie’s, Masa’s, Square One, and Stars. Named after the rue de Rivoli in Paris, it was inspired by the tasty little bistros, bodegas, and trattorias that make European travel so fun and fattening. The kitchen uses local organic produce, naturally raised meat, and sustainably caught fish in its culinary creations, which are served in a cozy, friendly, professionally operated venue along swellegant Solano Avenue. Just inside the door is a five-seat bar ideal for single diners and drinkers, and past the busy open kitchen is a simple, handsome dining room in brown and beige with Japanese-style bamboo/paper-lantern/slatted-wood accents. Wraparound mirrors reflect the room’s most striking feature, a lovely, brick-lined garden abloom with trees, ferns, potted plants, and shrubbery, just on the other side of the floor-to-ceiling windows. The effect is tranquil, soothing, and good for the digestion.

Every meal kicks off with crusty Acme sourdough, sea salt, and a crock of sweet butter, an amuse-bouche that has yet to be improved upon. Among the more official starters were spring-carrot gnocchi, tender and feathery with a distinctive earthy-rootsy flavor that meshed well with the sweet English peas and the big, juicy Gulf shrimp that shared the platter. Rivoli’s signature portabella mushroom fritters weren’t as impressive, bearing a heavy, rubbery texture and an undistinguished (and barely garlicky) aioli on the side as well as snazzy accents from fresh arugula and shaved Parmesan.

The best entrée was the grilled salmon, an impeccably fresh and juicy filet served with several contrasting flavors: a brisk, eye-opening champagne-braised cabbage; a salad of tender pea sprouts and chewy, smoky bacon; and a disappointingly mushy and pallid leek-and-snap pea risotto that was more like a pile of boiled rice than the creamy delight of yore. Also left wanting was the short-rib ravioli, a mishmash of chewy beef shards, limp pasta, and enough sweet accents (orange, fennel, roasted onions, and tomatoes) to overtake and diminish the dish’s individual flavors. The roast chicken roulade likewise lacked culinary distinction, with spiced couscous, garlic-mint yogurt, and a stuffing of pine nuts and dried fruit converging on the fowl. The chicken itself was moist and tender, the accompanying asparagus was perfection, and the chickpea fries were crunchy outside, soft within, and delectable all over.

The star of pastry chef Cydne Kaye‘s dessert menu was the chocolate pecan cake, a light, moist, warm, and sticky slice of endorphins with a rich, cocoa-y flavor; a tangy drizzle of lemon coulis; and sweet and crunchy bits of pecan praline. The coconut tuile was nothing special, just a nicely crafted banana pudding served in a pastry shell ribboned with tough strands of coconut meat. But the sorbets were terrific: crisp, cool distillations of black currant and pear, the perfectly refreshing end to the meal.

Although Rivoli, like any good California restaurant, is instinctively veggie-centric, most of its dishes feature meaty or fishy ingredients. But vegetarians will still be able to assemble a tasty meal. Among the starters, the portabella mushroom fritters are a recurring favorite, while the soup is often vegetable-based, and there tend to be two or three salads. There’s almost always a meat-free entrée, as well. (Through May 2, it’s an impressive-sounding filo pie with mushroom duxelle, wild rice, rainbow chard, toasted almonds, ricotta, grilled vegetable vinaigrette, and dill cream.)

General manager Skipper is also the restaurant’s sommelier, and his well-chosen wine list includes nearly 100 options from boutique vineyards here and in France, Italy, Spain, and Germany. Many are biodynamic, sustainable, or organically raised. The thirty whites, fifty reds, and eight sparkling wines run the gamut from $25 to $200 per bottle, but most are in the $30 to $70 range. There also are sixteen half-bottles and fifteen wines by the glass. (Skipper’s WineLine on the restaurant’s web site offers helpful insights into the different wines’ characteristics and backgrounds, so you can use it to choose a wine and even order it ahead of time.) The half-dozen beers include Chimay, Sudwerk, and Prohibition Ale, and the bar stirs up an especially smooth manhattan out of Buffalo Trace bourbon and spicy Barolo Chinato digestif. Teetotalers can opt for a cup of Far Leaves Purple Bamboo tea, a glass of house-made lemonade, or the Stevie Wonder, a refreshing blend of Navarro grape juice, sparkling cider, and lime. Whatever you’re sipping, Rivoli’s combination of imaginative food, informed and attentive service, and relaxing atmosphere has an intoxicating quality of its own.