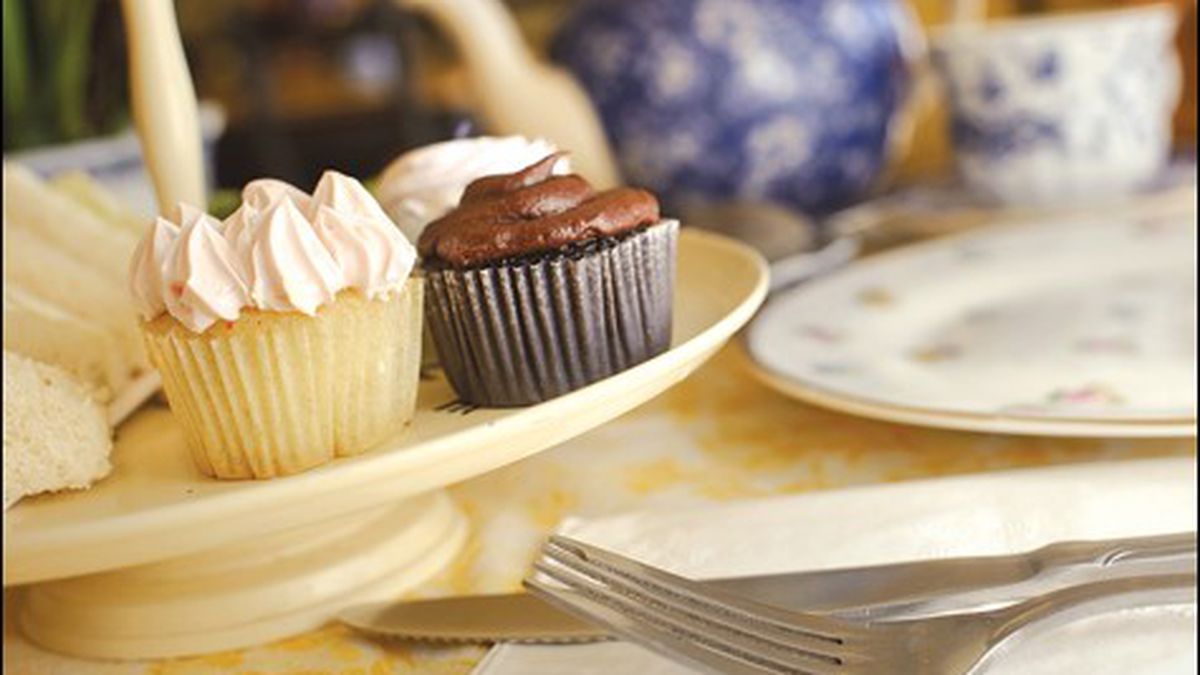 Enjoy a tea party with a view at the Albany bakery and cafe.

Did you ever fall in love with an idea? Beckoning just out of sight, it vowed — as all such ideas do — to teleport you to another place and time, outside the daily grind. Upon arrival you clung to that love, even when certain things went wrong, because others went very right.

The décor of these destinations depends on the dreamers, but more than one kind of person can’t resist the concept of high tea. The very phrase conveys a one-two pleasure punch, as high, then tea, each unspools skeins of fantasy, all stratospheric and serene.

Lourdes Guzman grew up in Montreal in a food-loving Filipino family: One sister is a baker; another a chocolatier. Committed to teatime as a rejuvenating daily ritual, Guzman opened Buttercream in 2008.

Step through its door and dreams come true. Has anyone, anywhere, ever really meant the phrase “too cute”? Linen aprons and framed paintings of fruit adorn palest-yellow walls — buttercream, get it? — against which distressed credenzas and sideboards are crowded with candy-colored cups, saucers, and folk-art eggs. The floor matches the walls. Pastel bunting shirrs gently. Hanging everywhere are flamboyant filigree vintage birdcages of every shape and size. Bright toy birds pose in most. A soaring bouquet of head-size yellow silk flowers crowns a case displaying gorgeous pastries. Farm-style tables of blonde wood fill the middle of the room. Beyond a wisteria-fringed massive storefront window, Albany Hill might just pass for Hampstead Heath. In one corner, a loveseat flanks a small tea-party table near a clutch of toys meant to be played with. This is homey-country-cafe high tea, not the Ritz Hotel — but it’s homey-country-cafe to the hilt.

Its intense lemon bars and satisfying, lyrically fragrant lavender shortbread induce summertime even on rainy days. This is the kind of place you wish your grandmother could see, the kind of place that makes you want to swing your feet and draw pictures of ponies.

Only the westernmost quarter of a space formerly occupied by the vast Discounts Unlimited is now devoted to seating and serving. Crafting the croissants, cakes, and other pastries that are baked here daily, workers glide around an open kitchen bigger than some people’s houses, wielding pans and trays and spatulas, pouring ingredients into steel bowls the size of manhole covers.

Consulting the menu, we ordered soup. The extremely nice server said there wasn’t any. Consulting the menu again, we ordered potato salad. Sorry, none. Cole slaw? None. Sorry. It was lunchtime on a Saturday. The place was packed, but not enough to account for having devoured every drop of salad, soup, and slaw.

One of the many things that Buttercream does right is serve breakfast magnanimously late — until 2 p.m. — on weekends. We ordered eggs Benedict with vegetables instead of bacon. We ordered high tea-for-one, selecting pear-and-Stilton from a span of sandwich fillings that includes salmon, ham, chicken, cucumber, and watercress. From among fifteen white, green, black, and herbal Adagio-brand teas, we picked the “second-flush” — summer-picked — Assam Melody, assured that it would be smoky and strong. Tuffy ordered the $2 bottomless cup of coffee. That’s another thing Buttercream does right: unlimited refills. (The tea that comes with high tea is also unlimited. Fancy coffees are not bottomless but served French-style, in bowls.) The decaf urn was empty. The server promised to fill it.

All around us, other diners nibbled big, pillowy scones and gemlike mini-cupcakes off deliberately mismatched fine china: a signature Buttercream quirk. Awaiting meals, some shifted restlessly. As ten minutes turned into twenty-five, our eyes darted from the décor to the clock, then back as if ashamed by our hunger and anxiety, as if begging the jaunty toy birds to distract us. Blaming a wonky panini press, yet oddly leisurely, the staff of three apologized with charming grace. Decaf appeared, but cream did not. Anticipation is a tender thing, stretching out long and hot like newly crafted taffy, looping on itself.

At thirty minutes plus, the eggs arrived. Perfectly poached, crowning two creamy eggplant slabs on crumpets under lavish lashings of buttery Hollandaise, alongside sliced tomatoes and roasted potatoes seasoned with an expert’s touch.

High tea was that beloved fantasy made almost absolutely worth the wait. A two-tiered tray bore a giant strawberry and a hockey-puck-size apple cake whose frilly-edged, fruit-laden, cinnamon-perfumed golden resplendence was a revelation about sunshine and simplicity. The tray also held five crustless white finger sandwiches — the pear slices inside them crisp and sweet, the Stilton exhilaratingly sharp. A huge butterscotch scone flanked little china crocks of jam and clotted cream to spread on its fluffy generosity with tiny, swooningly adorable silver and blue-enamel spoons. The tea came in a jolly yellow pot with dainty strainer, spoon, and mismatched cup and saucer, both Bavarian, both blue and white. Pricking our dreams of Devonshire, the tea was weak.

Subsequent visits yielded crunchy, capable Panini; succulent spinach quiche; and quicker service, notably during off-hours. But even when it wasn’t, the staff was sincerely sorry, which in one sense just amped up their charm. After all, human hearts propel each restaurant’s splendors and inevitable slips, although in most restaurants those hearts are almost always hidden behind plastic smiles.

In creating Buttercream, Guzman anticipated countless sweet surprises guaranteed to make you coo. And even when you watch the clock or ask again for cream, you coo and coo. This is the power of the cute. It is a very real power and it goes far. The food is good, some of the pastries great, but as those toy birds will tell you: Cuteness is its own reward.