One of the most impactful student-teacher yarns in many years. 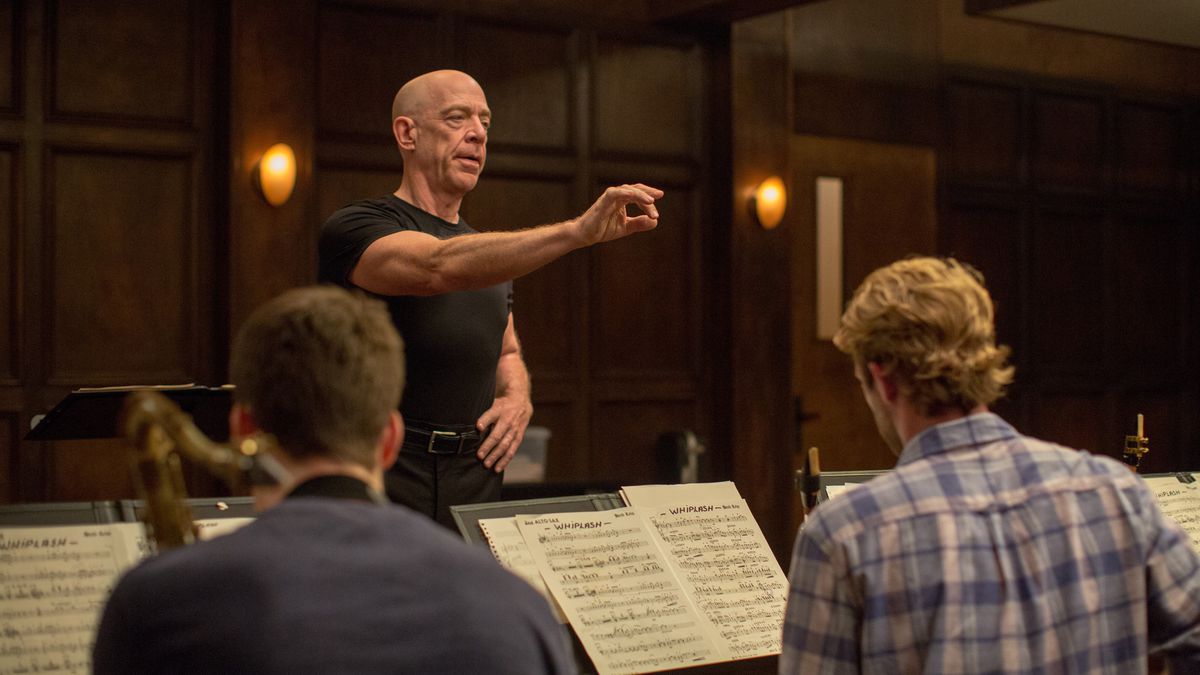 Music school student Andrew Neiman (played by Miles Teller) is a maniac on the drums. His teacher Terence Fletcher (J.K. Simmons), however, is a maniac, period. Watching Whiplash, the remarkable character study in which they interact, we bounce back and forth between them hectically, trying to gain a foothold in one of the most impactful student-teacher yarns in many moons. Their ordeal is our entertainment, I think.

Ordinarily we’d be pulling for nineteen-year-old Andrew, a driven and slightly abrasive personality who lives and breathes jazz drumming and idolizes big-band percussion dynamo Buddy Rich. We’ve seen variations on Andrew’s earnest, inexperienced character in countless mentor-neophyte scenarios, and he definitely fits the mold. But when Fletcher enters one of the rehearsal rooms at the conservatory and begins dressing down an orchestra full of ambitious young musicians as if he were a drill instructor pounding military discipline into a platoon of recruits, the music teacher instantly storms onto center stage. The mentor is a monster, humiliating, browbeating, and physically pummeling his students toward his goal of perfection. In the real world, he would probably be sued and prosecuted.

Actor Simmons, as everyone knows, has built a tidy filmography playing sharp-tongued, mocking authority figures, usually for laughs. But after Fletcher’s display of naked aggression in Whiplash, we’ll never look at one of his Farmers Insurance commercials the same way again. What’s especially puzzling about Fletcher’s abusiveness is that it alternates with moments in which he actually seems to nurture his young charges. In his free time, we observe him plying his trade as a pianist in a club and behaving benignly. But then in rehearsal he lashes out with the most personal attacks, often upon Andrew, who tries his best to suck it up and be professional, but who’s obviously wounded by the astounding ferocity.

We get over it, though. Andrew’s character is more interesting than Fletcher’s. He has a caring father (Paul Reiser), at least a chance at a romantic relationship with a sweet young woman (Melissa Benoist), and, in a scene at a family dinner party, Andrew demonstrates his ability to shake off adversaries with a bit of style, in this case dismissive relatives. And then there’s his drumming, into which he pours all the frustration and anger he’s been feeling. Which may indeed be the point of Fletcher’s maniacal assault on his gifted students. But after awhile we reduce it to Simmons the actor taking the gloves off and showing just how nasty he can be. Evidently writer-director Damien Chazelle developed Whiplash from a short film he made last year, and it has the hallmarks of an artistic itch that needed to be scratched. Simmons and Teller are both superb, and the music is a fine advertisement for the virtuosity of jazz players in general, but it makes us wonder about how all that artistic expressiveness is arrived at. I doubt if I’d ever want to see it again.

Next ArticleFour Vegan Dishes to Tempt a Meat Eater