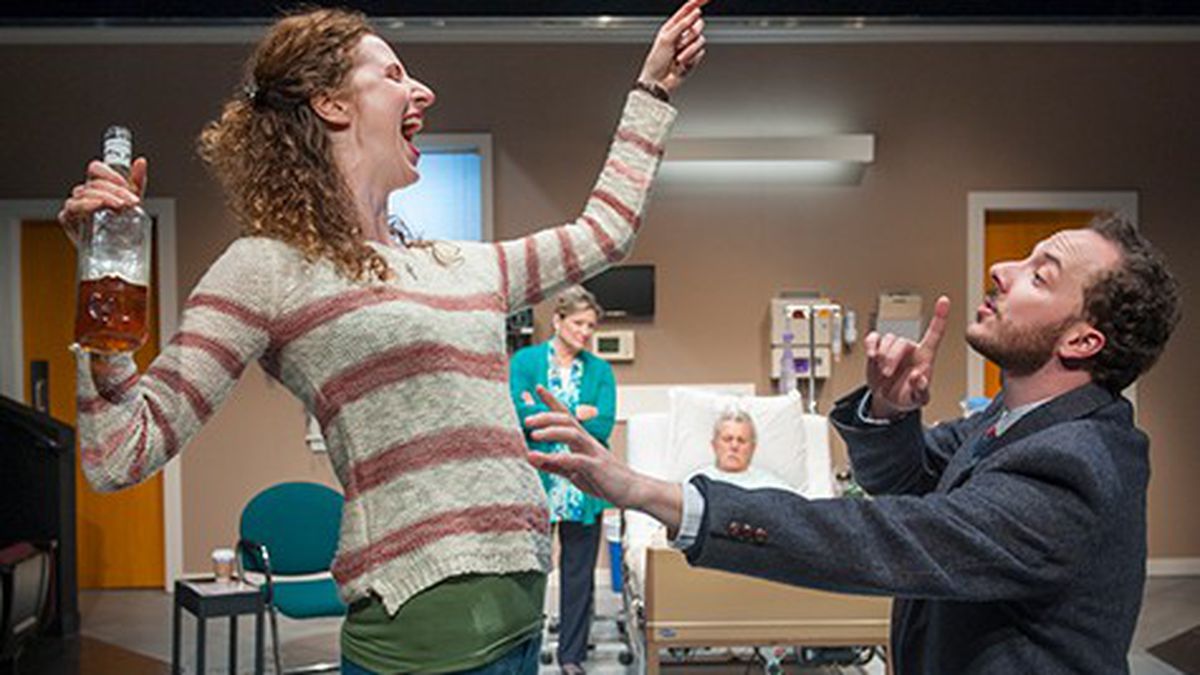 Review: ‘The Lyons’ Is a Dark Comedy with Teeth

The Lyons is as beastly as its feline almost-namesake suggests — replete with instances of death, domestic violence, homophobia, addiction, and the kind of emotional mauling that comes with enduring a lifetime of small regrets. The dark farce of a play — written by Nicky Silver (Pterodactyls, Raised in Captivity), and directed with scalpel precision by Barbara Damashek — made its Bay Area debut last weekend at Berkeley’s Aurora Theatre.

It starts (and ends, for that matter) in the antiseptic gloom of a hospital room (with set design by Eric Sinkkonen and lighting by Kurt Landisman). Ben (Will Marchetti), the grizzled family patriarch, is dying of cancer. But he hardly seems interested in that fact, preferring to spend his final days bickering with his wife Rita (the radiant, cutting Ellen Ratner) about furniture and verbally assaulting everyone he encounters. Despite having been de-clawed in his final hour, Ben’s curmudgeonly helplessness manifests in exceptionally funny ways. In one of his only admissions of vulnerability, he defeatedly tells Rita, “I’m dying.”

“I know, dear,” Rita replies. “Try to look on the positive side.”

Though Rita and Ben’s relationship provides much comic potential, it’s very much underscored by seething contempt. How on earth could these two people have stayed married for thirty years? I found myself wondering, after my laughter died down and was replaced by a crippling sadness. Ben and Rita’s grown children, as you might imagine, didn’t fare too well in such a barb-filled environment. Lisa (the hopelessly frazzled Jessica Bates) is a divorced, alcoholic mother seemingly always on the verge of a relapse, and Curtis (Nicholas Pelczar) is a tight-lipped moocher with a tenuous grip on reality. Their claws come out the moment they set foot in the same room, and the family quickly collapses in a blame-filled bursting that is as exhausting as it is strangely moving. There’s a grain of truth hidden at the bottom of every lie we tell ourselves, and The Lyons excels at revealing those truths, though often in brutal ways.

Silver, whose work is often compared to the likes of Joe Orton and Edward Albee, prefers his comedy with teeth (or “high wit and low self-esteem,” as he’s quoted in the program notes as saying), and even the lines that draw the biggest laughs are smothered in a kind of sadness gravy (the best kind, in my opinion). Silver’s comedy employs a rapid-fire quipping and an insult-prone neuroticism that is often associated (in theater, and elsewhere) with certain sects of the Jewish, middle-class intelligentsia. In this way, Ratner as Rita carries the show — her overbearing Jewish momness is intoxicating to watch, and her attempts at love and affection are buoyed by subtle slander, giving her comedic presence a savage, delirious bent.

Perhaps the most exasperating character is Curtis — an over-enunciating gay short story writer whose repression manifests in fantastically twisted ways. An explosive scene in Act II with a real estate agent (the simmering Joe Estlack) turns the well-trod tropes of the family drama completely on their head. Witnessing Curtis’s displays of monstrous loneliness is almost unbearable.

In the end, the play’s tightly wound ruthlessness and galloping pace leave few moments for much reflection, but afterward, you might find yourself with an unknowable ache (and perhaps a renewed relief that your family is not like the Lyons).

Silver’s characters are, in their lighter moments, affably tortured beings, and though the play does leave us with the slightest glimmer of hope, audiences might not ultimately find that very reassuring. But still, if The Lyons teaches us anything about life, it’s that the weight of our suffering lightens once we are brave enough (or stupid enough) to look it in the face. And I ain’t Lyon.