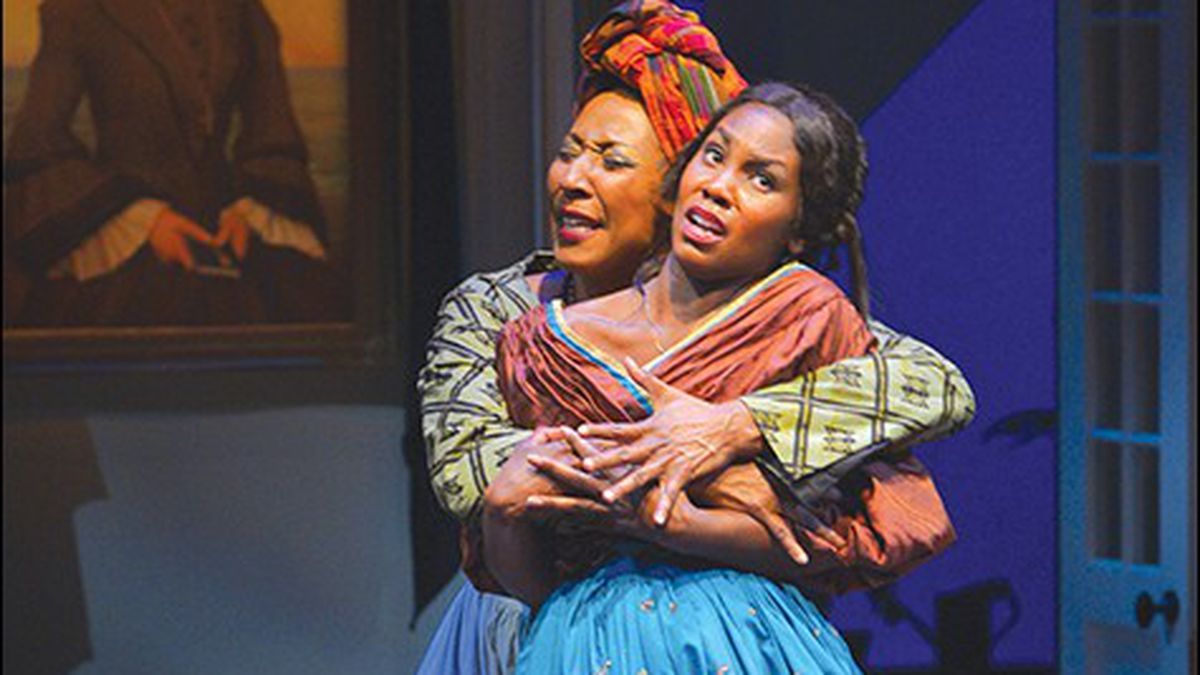 Review: ‘The House that will not Stand’ at Berkeley Rep

“Always use both hands and don’t be afraid to try something new.”

This is the advice that slave/house servant Makeda (played by the stirring Harriett D. Foy) supplies her mistress, both for how to make a good gumbo and how to make love. One could take it a step further and say that her advice applies to theater, too, and Oakland-born and heavily acclaimed Marcus Gardley does all that and much more in The House that will not Stand, which saw its world premiere at Berkeley Rep last week.

The concept of freedom is at the core of the historical drama, which takes place in New Orleans in 1836 at a time when the system of plaçage — common-law marriages between wealthy white men and free women of color — was common, though technically illegal. At the helm of one such aristocratic house is Beartrice (Lizan Mitchell, whose booming presence and iron convictions make her a truly formidable matriarch) and her recently deceased husband-of-sorts Lazare (Ray Reinhardt). Despite one brief, posthumous spanking by Lazare and a full-fledged ghosting scene later on, The House that will not Stand is composed solely of women of color, which is sadly so rare in theater that this fact alone makes it noteworthy. But the play also benefits from witty dialogue, an electric cast, and hearty servings of lust, murder, voodoo, jealousy, and intrigue in the Big Easy.

The story revolves around Beartrice, who wants to secure a future for her three daughters, Agnès (a cocky yet fragile Tiffany Rachelle Stewart), Odette (the sly, romantic Joniece Abbott-Pratt), and Maude Lynn (whose name is a perfect pun for the Jesus-loving character, played by Flor de Liz Perez). Beartrice doesn’t want her daughters to end up as placées, however, so she plans to move them all to Paris so that they might enjoy lives that are truly free. As the title of the play hints, things don’t go as planned.

Imbuing the central conceit are magical realism, spiritual singing, and an exorcism, as well as interlacing subplots about two of the daughters sneaking out to attend a ball for potential placées; Beartrice’s mad sister who’s been locked in the house for years, lest she run away with a black lover; and a rivalry between Beartrice and a neighbor/former friend (both the sister and neighbor are played by Petronia Paley). A lot of ground is covered in the play, which runs just over two hours, and since the era and specificities of plaçage aren’t well-known, a decent amount of time is devoted to its legal and ethical intricacies, as well as how the Louisiana Purchase made it harder for people like Beartrice to keep what few rights they had, and how Beartrice got screwed out of her inheritance and her daughters’ dowries when Lazare died. While it was interesting to glimpse the social codes and mores of this lesser-known era in New Orleans, at times the dialogue felt more like a history lesson than a play. But those times were few and far between.

The real spirit of the show begins and ends with the powerhouse that is Makeda, who delivers the funniest lines (“She’ll be madder than a three-legged dog trying to bury a turd”) and the most emotionally gripping monologues about sex, race, and freedom. While the other characters achieve varying degrees of independence, Makeda gains the most righteous kind — the freedom from slavery — in a scene that grounds and elevates the play. Makeda is both servant and prophet, sage and gossip: She embodies old and new traditions, buries and reveals histories, and acts as peacekeeper for the increasingly chaotic household and world — all with the occasional well-timed sex joke and lustrous vocal arrangement.

Along with the notions of freedom, The House that will not Stand also confronts a topic that has caused much fretting, historically and politically — the sexuality of women of color. Gardley, with his keen sense of the poetic and the vernacular, manages to uproot the issue in a manner that is both amiable and obvious, campy and serious. The best example of this is when Beartrice tells Makeda that she is bringing “sweet potato pie” to the white wife of Lazare, in an attempt to convince her to let Beartrice keep some of her inheritance from her deceased lover. Makeda, knowing that Beartrice does not cook, thinks she is trying to poison the wife, and after several beats, Beartrice reveals she is talking about her sexuality — the ultimate source of her power, capable of seducing not just rich men but their women, too. It’s a hysterical moment, but one that also riffs on and subverts stereotypes about black women’s sexual “dangerousness.”

Though at times the overlapping subplots were difficult to keep track of, and the staging somewhat clustery (particularly when the upstairs and downstairs scenes occurred simultaneously), House is buoyant and barby enough to keep our attention. Plus, its lyrical undoings, depth, and playful fervor make for a dazzling and rousing experience.

At the end, the house may not have been left standing, but the audience certainly was.

A Surprising and Effective Way to Reduce Waste