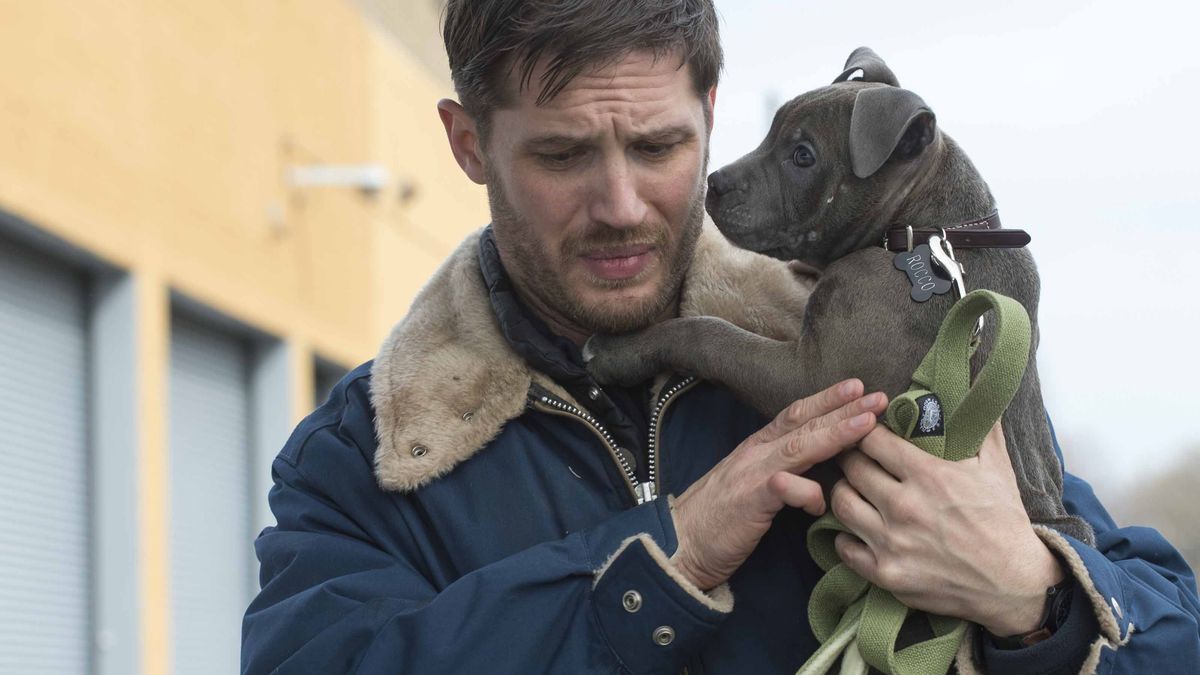 James Gandolfini and Tom Hardy star in one of the best films on screen this season.

Thirteen years into his screen career, Tom Hardy is one of the most compelling character actors in the business. The 37-year-old UK native has specialized in roles typecast for his compact, muscular build and intensity — in Bronson, Inception, Tinker Tailor Soldier Spy, Warrior, and Black Hawk Down – but over and above the muscle stuff, Hardy excels in portraying men of quiet strength who are put to the test. Such a role is Bob Saginowski in Michaël R. Roskam’s urban actioner The Drop. Both the role and the movie are among the best things on screen this season.

Taciturn, agreeable Bob (Hardy) seems a bit slow on the uptake. He tends bar at Cousin Marv’s, a neighborhood saloon in Brooklyn, New York operated by Marv Stipler (James Gandolfini), the sort of low-wattage “known associate” who’s always working on some half-thought-out proposition. From the way Marv nags at him, Bob gives out too many free rounds, but that’s the least of their problems. Compulsive gambler Marv has recently lost the bar to a repellant Chechen gangster named Chovka Umanov (Michael Aronov), and now must suffer the indignity of having Chovka and his goons drop by periodically, checking up on things, while Marv patiently awaits word that the bar is going to be that night’s “drop” spot for unlaundered cash. One more item: The bar has been robbed lately, and Chovka wants his money back, he doesn’t care from whom. So Marv watches Bob, Bob watches Marv, Chovka keeps an eye on both of them, and NYPD Detective Torres (John Ortiz) follows along a step or two behind, trying to connect the dots on unsolved criminal cases.

Bob’s life is relatively uncomplicated until the night he discovers an abandoned puppy inside a garbage can on the property of a lonely, defensive local woman called Nadia (Noomi Rapace). Nadia and Bob meet and make nice over little Rocco the pit bull, but her nasty-minded hoodlum ex-boyfriend Eric Deeds (Matthias Schoenaerts from Rust and Bone) keeps picking on them. And then it is announced that Cousin Marv’s has been chosen to handle the drop on the night of the Super Bowl, which means thousands of extra dollars will be in the cash box underneath the bar. Something’s gotta give.

The writing, an adaptation of Dennis (Mystic River) Lehane’s short story “Animal Rescue” — reset from Dorchester, Massachusetts to New York’s outer boroughs — has the snap and ingenuity we always hope for but seldom get in mainstream crime films, and the characterization is on a similar high plane. It’s sad to watch Gandolfini’s work slowly roll out more than a year after his death, because even a so-so film like Enough Said reminds us how good he really was. In The Drop, his Marv is the epitome of low cunning masquerading as grumpy working-class affability.

We could say the same about Bob, except that he has the knack of moping harmlessly while simultaneously taking mental notes on everything around him. Just putting his thoughts into words appears to be a chore, so people tend to underestimate him. His main objective appears to be the welfare of the pooch and the woman. The only character in the movie that doesn’t seem to have an ulterior motive is Rocco the dog, and sometimes we even have our doubts about him. Hardy, Gandolfini, Rapace, Schoenaerts, and Aronov are all virtually perfect for their parts, and The Drop, directed subtly by Michaël R. Roskam (Bullhead), is top-quality genre filmmaking.