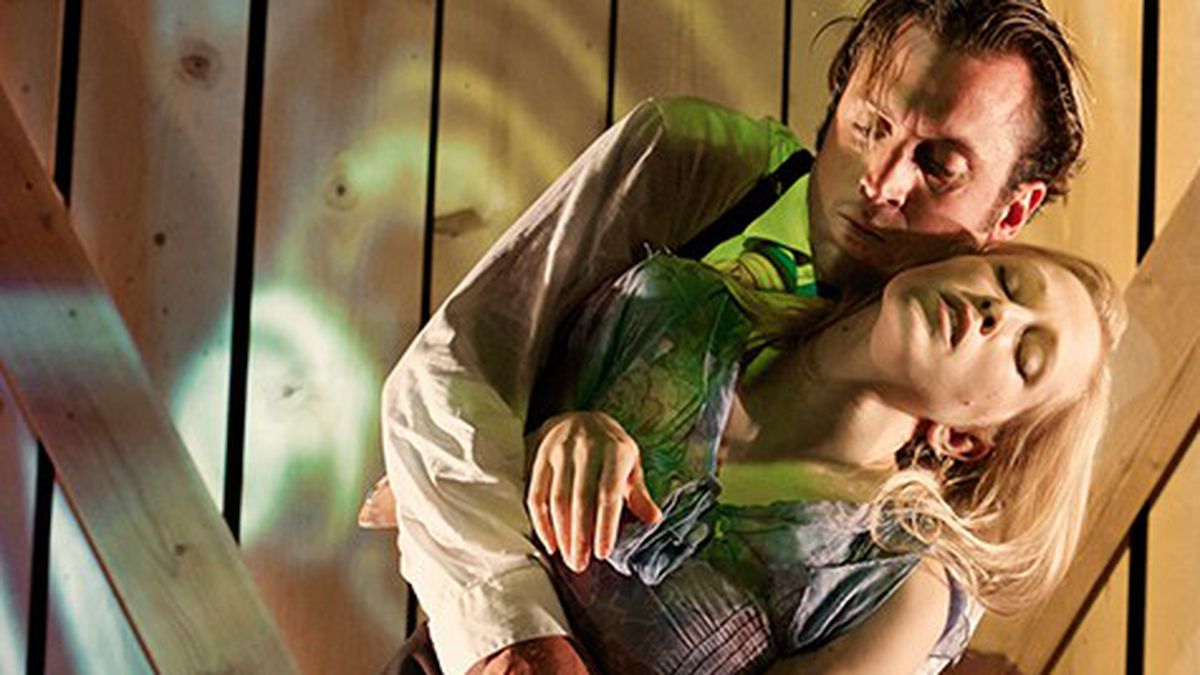 Review: Shotgun Players’ ‘Bonnie & Clyde’ Goes Out with a Bang

Play reveals the humanity of the outlaw lovers.

People you love are not replaceable,” says Bonnie (Megan Trout) to her lover Clyde (Joe Estlack), after she reads in the paper that they’ve killed a young girl’s fiancé, and Clyde tries to console Bonnie (and possibly himself) by reminding her that the girl was young and has time to find another man. The sweet-yet-ominous line also doubles as the show’s tagline, as well as a foreshadowing for what will soon befall the doomed duo. We know how the story ends in Shotgun Players’ Bonnie & Clyde, which runs through September 29 at The Ashby Stage in Berkeley. But the knowing doesn’t detract from the compelling and tragic tale of romance and violence between the two amorous outlaws from Texas, who stole not just from banks, but also the hearts of the American imagination during the Great Depression.

In this resurrection of Bonnie and Clyde’s story, playwright Adam Peck hones in on one day in the couple’s life, shortly before they are killed during a shootout with cops. The setting is a scant, empty barn in Louisiana, with slatted wood boards spaced far enough apart to let backlight in. The real construction of Shotgun’s Ashby Stage contributed to the barn-like atmosphere in a synchronous way. On stage are only a ladder and a small crate, but the tension between the fugitive lovers on a date with death is more than enough to fill the room. As the audience greets them, both are sporting gunshot wounds, and are hiding out in the barn until they are healed enough to plan their next move. Video projections (designed by Micah Stieglitz) along the barn wall double as a kind of time machine — a visual marker signaling that the narrative is leaving the present — and are poignantly used by Clyde, who intermittently interrupts the present in order to describe the couple’s graphic demise shortly after they leave the barn.

The lovers’ more fraught moments are bracketed by poetic and charged movements, devised by director Mark Jackson, the actors, and choreographer Kimberly Dooley. At turns frantic, poppy, and sensuous, Bonnie & Clyde‘s interpretive dance numbers recall the celebrated German choreographer Pina Bausch. Since what Bonnie and Clyde precisely said to one another in their final days remains a mystery, using dance as a conveyer turns the more unspeakable emotions into a transfixed and urgent spectacle.

Though the dance sequences act as a modernizing device, that’s where the contemporary allusions end. This isn’t to say that the themes from Bonnie & Clyde don’t resonate with present-day audiences — they certainly echo many of today’s political and economic grievances, specifically the wealth disparity, the sham of the American Dream, and a general “stick-it-to-the-man” sensibility — but the heart of the play is simpler, and rests on, well, matters of the heart.

Peck’s writing does an impressive job of clearing away the gauzy romanticism that has come to surround the couple’s mythology, and our own cultural understandings of romance, crime, and tragedy. The play is riveting throughout its eighty minutes; even when the couple engages in more mundane tasks like reading the paper or cleaning a wound, the whole atmosphere is pervaded by a sense of both exhilaration and doom. This is no fairy tale, after all. Bonnie and Clyde rob and kill people, and their relationship is fraught, laced with torment, insecurity, passion, abandonment, and a dwindling hope that their dreams may one day come true. At times, one wonders if the lovers might kill each other before the cops get to them. But at the same time, their grandiose declarations and willingness to die for each other is palpable and affecting. They seem far more jaded than their twenty-odd years should allow, but also childlike, as if they know they are role-playing the lives they’ll never see come to fruition.

Underneath the guts and grit exterior are two troubled kids who want to be loved and famous. Estlack exudes a naturally intense demeanor, and he excels at making Clyde seem both lovable and menacing, teetering precariously between boyish excitement and his desire to riddle everything with bullets. As Bonnie, Trout is similarly short-fused. At times demure and petulant, she vacillates easily between shy insecurity (“Do you find me attractive?”) and emotional toughness (“I got bullet holes for you, ain’t that enough?”). Bonnie’s gritty individuality is never subsumed by her paramour’s swagger. If anything, she seems more threatening, more prone to violent outbursts than Clyde does, and proves this by threatening to kill Clyde.

Despite their doomed fate, there is much humor in the young felons’ relationship (and for all their passion, a painfully awkward sex scene). Their domestic squabbling about grave plots — arguing the way a contemporary couple might at Trader Joe’s — is morbidly funny. It does much to reveal the couple’s humanity, and the play brings a devastating energy to the task of making Bonnie and Clyde’s legend mortal once more.