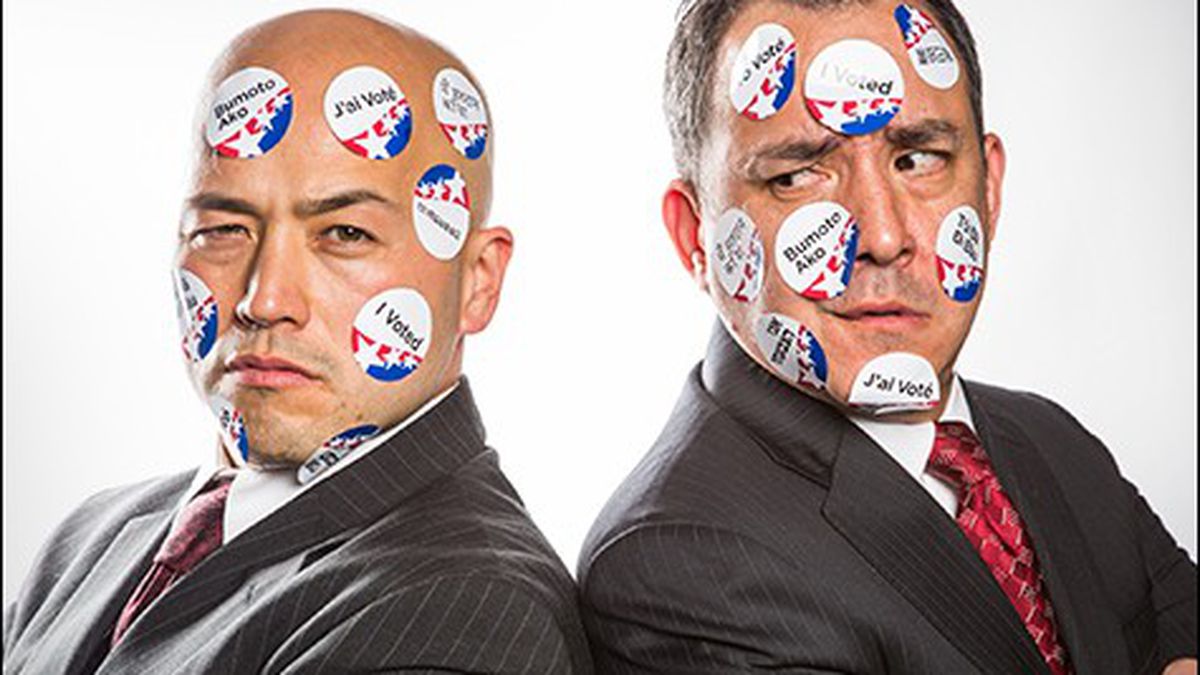 Racial tensions are tackled with hilarity.

To close out its 2013-14 season, Impact Theatre collaborated with Ferocious Lotus, a San Francisco-based theater company that promotes Asian-American works and artists, to produce Mutt: Let’s All Talk About Race, a hilarious and preposterous satire that explores what we talk about when we talk about race in politics (and elsewhere). Written by Bay Area native and Glickman Award-winning playwright Christopher Chen (The Hundred Flowers Project), Mutt tackles the sensitive subject of race with a delightfully self-effacing tone, tongue thrust firmly in cheek.

As its title suggests, the play combines identity politics, racial injustice, and — a favorite topic of East Bay types — white guilt, to produce a thoughtfully hilarious and at times deadpan resignation to America’s confused and conflicted beliefs about race and minorities. The premise involves an enlightened Republican Party that suddenly realizes it can’t ignore the “race issue” anymore and decides to place its bets on a hapa — that is, someone of mixed race Asian descent — as its choice for presidential candidate in 2016. At first, it seems like Nick (Matthew Lai), a promising young Congressman, is a perfect fit for the job — until he reveals an unwavering love for the music of Milli Vanilli. The GOP then sets its sights on a “super hapa,” a decorated war veteran named Len Smith (Michael Uy Kelly), who is a mix of every race and ethnicity (and sexual orientation, and a few other surprises). Nick’s rejection by the GOP leads him on a soul-searching quest and eventual party switcheroo, leading the two men to hash it out for the presidency.

Balancing out the overt political storyline is a sub-plot involving a hunt for an ethnically ambiguous serial killer. An investigator (played with abject, despairing shazam by Lawrence Radecker) attempts to track down a murderer by interviewing eyewitnesses (each one played with mirthful cluelessness by Marilet Martinez) who reveal nothing useful except their own racial prejudices. “You say the killer was African-American?” the investigator asks. “Well, he was wearing a hoodie so I just assumed,” an eyewitness responds. At the same time, the investigator recedes deeper and deeper into his own white guilt — he uses a recycled cereal box as a wallet, dumpster-dives (and catches mono), and finally refuses to fart in the presence of others. Each reveal is funnier than the last and provides a welcome refresher to the main churning of the political rat race.

Mutt is a decidedly modern experience, with references to Grand Theft Auto, Katy Perry, and one of the most unique revenge scenes in history (I won’t ruin it, but I will say it involves Sriracha hot sauce). Of the many frank and funny racial parodies explored, the most LOL-inducing involved a Latina cleaning lady who was so overlooked by the Democrats that she literally ceased to be visible, causing a Hillary Clinton-esque strategist (the priceless Patricia Austin) to trip over her. It’s so over the top, it works, and I secretly hoped the invisible cleaning lady would make further “appearances” and mess up the characters’ lives with her wily, unintentional ghostliness. (Alas.) Rounding out the ensemble of talented actors, each playing multiple roles, was the endearing Hanna (Michelle Talgarow), the consultant whose conservative boss can’t stop hitting on her. “That’s the power of the hapa,” she says. “Also, I remind you of your mother.”

Lest you think Mutt is strictly a GOP bashfest, Chen devotes nearly as much time skewering the Democratic Party — considerable mockery is aimed at Dems’ inability to make even the most inane decision (such as where to sit in a meeting), their self-congratulatory airs, and obsession with using the term “middle class” at every available opportunity.

Despite its sharp pace and air of spontaneity, the one quibble I had with Mutt — and this could very well be my (half-)white guilt talking — was that it could have benefited from a shred of earnestness. Don’t get me wrong, I appreciate the kind of mockery that takes place from behind a jocular shield (or computer screen) of uninformed smugness, but the play, especially in the second act, contained some comical overstatements that revealed a touch of trying-too-hard goofiness. The rest of the time, however, Mutt packs a stellar, searing punch, underscoring the ridiculousness of our seemingly progressive times and our misguided assumptions about, well, everyone.

Sheriff’s Termination of ICE Jail Contract Not a Win for Many...

Pollara Pizza Brings Rome by the Slice to Fourth Street